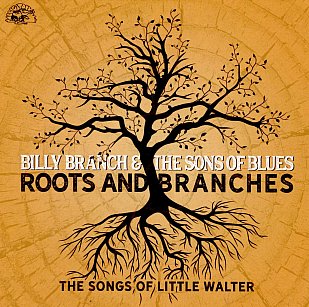 Harmonica player and singer Little Walter – Marion Walter Jacobs – died in 1968 just as the British blues boom was taking off although he'd achieved some career acclaim (he still wasn't 40 when he died after a fight) he didn't live long enough to see how big the blues – and its acolytes – would get in Britain and Europe.

A gifted and innovative harmonica player, he had been in demand in Chicago, enjoyed hits, played on numerous sessions for Chess artists and lead his own band.

The imposing Billy Branch – born in Chicago, raised in LA, made his name back in Chicago in the Seventies – has appeared on albums by Koko Taylor, Willie Dixon, Keb Mo, Taj Mahal, Johnny Winter and many others, has lead his own band for decades (in 2017 he celebrated 40 years with various lineups of Sons of the Blues, won plenty of awards and is now back on the Alligator label which would seem his natural home for his powerful style and the heft his band bring.

Although they pick up some of Little Walter's more familiar songs – Nobody But You, My Babe, Big Bill Broonzy's Key to the Highway, Blues with a Feeling among the 14 tracks – Branch and band bring a tough swing sensibility (notable in the playing of pianist Ariyo Ariyoshi) and some blues-rock from guitarist Giles Corey.

This is a thoroughly enjoyable tribute which is respectful enough but which they punch their own stamp onto.

And it ends with Little Walter's daughter Marion Diaz fondly reminiscing about her dad.