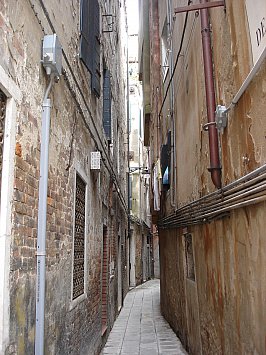 Pity the Welsh, and not just for their poor rugby team. At this year’s Venice Biennale their artists were at a site so removed you probably only found it if you got on the wrong boat heading out of town.

In a city of bewildering lanes, many exhibitions were as elusive. Even those from Iran and Afghanistan -- their banners draped along the Grand Canal -- proved difficult to locate.

We got off at the next vaporetto stop and headed back only to get lost, discover some amusing installations by Latvian artists -- and grim, homoerotic pieces by a self-mutilating Estonian -- before finding what we were actually looking for.

The New Zealand site however was easy. Located in a lane halfway between St Mark’s Square and the main Biennale site at the Giardini, most people avoiding the hawkers selling models of gondolas and aprons printed with the lower region of Michaelangelo’s David would notice the sandwich-board sign pointing to it.

This new location doubtless contributed to the greater number of visitors than on the two previous occasions New Zealand has been represented. Over 30,000 people went to et.al’s installation “the fundamental practice”, and more significantly 3800 international curators, media critics and influential types attended the three days of previews before the official opening.

This, says chairman of Creative New Zealand Peter Biggs, was up on the 2500 artarati who attended Michael Stevenson‘s preview two years ago.

And in a Biennale which deliberately downsized after too many preview guests last time, that is a significant result. Feedback -- notably from the likes of Robert Storr, curator of the next Venice Biennale (who judged the 2004 Walters Prize giving it to et.al), and the influential Bart de Baere, director of the Museum of Contemporary Art in Antwerp and curator of the five-yearly Documenta art exposition -- has been consistently favourable.

The groundwork by CNZ before the opening ensured good media coverage also -- 20 major articles in international art magazines, and a consistent flow of articles and notices during the five month run.

The choice of et.al was controversial here -- I wonder what Estonians thought when their representative was announced? -- yet seen in situ the fundamental practice was a powerful, disconcerting and innovative installation which, unlike many in this Biennale, took its location into consideration.

It was both high-tech in its use of moving panels, yet also oddly low rent with a slide screen and projector. It appeared uninviting but was provocative and constantly changing once engaged.

In the time I was there indictments against the Americans at Abu Ghraib prison scrolled up on the screen, and later there were passages from the Tao Te Ching. Disembodied voices, snatches of opera, strange solo piano and a kitschy orchestral version of Volare filled the air, and suddenly the panels would grind across the floor to a new location. It felt industrial, oppressive and confusing, but also oddly compelling.

Through the window a gondola drifted past. That made a weird kind of sense too.

Many New Zealanders who visited made favourable comments to those on site. A number specifically recalled the earlier kerfuffle -- created by those who had not seen, and did not see, the work -- but said they were now persuaded by the installation and its complexity.

The exhibition book available - not a meagre A4 info-sheet that many countries provided -- was widely admired for its professionalism and intelligence.

The fundamental practice was impressive -- but et.al was also up against British media darlings Gilbert and George, some visceral Francis Bacon paintings, and Lucian Freud at the Museo Correr.

In the Australian pavilion Ricky Swallow’s still-life and trompe l’oeil wood carvings elicited gasps of admiration from a stream of visitors, and the witty construction work by Israeli artist Guy Ben-Ner was also popular -- and equally populist.

So, against major players and those with even better sites, how do you measure success at this art marathon-cum-circus? By your opening night bash?

Well, the Brits had Grayson Perry, Rolling Stone Ron Wood who brought Tracey Emin over in his private jet, and music by Rufus Wainwright. Cate Blanchett opened the Australian show, and Jarvis Cocker DJed at the Frieze magazine party.

That’s the context the artists are in. Even so New Zealand did well, the best showcase of New Zealand creativity yet according to Biggs.

The vodka company 42 Below were sponsors and did the cocktails, there was work by Len Lye, and New Zealand music -- and the party pulled 800 guests, 350 of whom came back the following day for the opening.

The project’s commissioner Greg Burke says the long-term Biennale strategy has always been not numbers but quality: “So we had a list of who we defined as the 200 most influential people internationally and we targeted them. The majority of them came.”

Art-media coverage before and during the Biennale has drawn attention to the New Zealand contemporary art scene in general, and the three exhibitions since 2001 have also given important international experience to curators, publicists and CNZ staff, as well as establishing networks.

But where to now? CNZ planned to attend Venice three times then reassess, the $500,000 it costs may be better used elsewhere.

Burke: “I don’t think the Venice Biennale alone is the only strategy, but so many people I talk to internationally only know of [contemporary New Zealand art] via Venice.”

He says to go three times and not return may be worse than not having gone at all, and New Zealand’s international profile has climbed considerably in recent years: Jacqueline Fraser who exhibited four years ago has shown in the New Museum of Contemporary Art in New York, and Stevenson has had a major survey in Germany.

Biennale success is measured in many ways. But was the fundamental practice successful artistically?

Certainly. It was powerful, demanding and bleakly rewarding -- although while I was there a month ago only two other couples arrived. The first walked out after a few minutes, and the other seemed uncertain as to whether this was the exhibition or a construction site. They read the sign on entry -- part of the installation -- which read “All visitors must report to site office on arrival” then left immediately.

Something to remember if there’s a next time, perhaps?