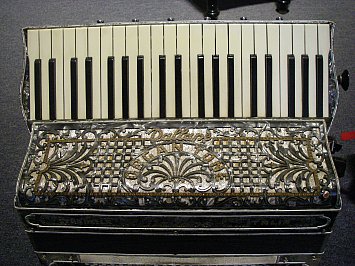 The journey takes less than an hour from downtown Auckland, but at its end you have stepped back in time.

Here the sounds of the 19th century fill the air: the rich swell of notes from a theatre organ made in New York in 1877, the wheeze of an accordion from the 1820s, the rinky-tink of an 1837 fold-away ship's piano ...

At Lloyd and Joan Whittaker's museum on Waiheke Island the sound of the past is alive - this is no mausoleum for musical instruments. The Whittakers' collection is a treasury where the instruments, from the dulcimer at least 250 years old to the concert grand used by Polish pianist Ignace Paderewski on his New Zealand concert tour of 1904, are played regularly.

Where most similar museums overseas simply display their historic contents, at the Whittakers', which appropriately bills itself as "Whittakers Musical Experience", they are not only played and obviously much loved but have also received international recognition.

"The German musicians who come for the jazz festival love the upright grand for its power and sound," says Lloyd Whittaker. "Of every 30 people who come about 20 would be from overseas."

The unique and rare instruments, mostly of the keyboard family, have been acquired by the Whittakers over many decades. Lloyd can point to a stool near a rare harmonium which his grandfather hand-carved for him when he was a child playing harmonica and accordion in the backblocks of New Plymouth more than 60 years ago.

Lloyd was given a mouth-organ for his fifth birthday. It was the beginning of a lifelong passion for music and instruments.

He learned by ear and every year would acquire another instrument to add to his repertoire. For his sixth birthday Uncle Charlie gave him an accordion. His parents acquired a mandolin guitar but couldn't play it, so Lloyd adopted it. At 8, his great-uncle gave him the family concertina which came out on the sailing ship Rakaia in 1869.

It wasn't until age 12, when the family moved to New Plymouth, that he had any formal musical training, eventually gaining a teaching diploma from Trinity College.

He taught music for 35 years around New Plymouth and played regularly for tourists in motel lobby bars. Those occupations brought him into contact with the wider musical community in Taranaki, and he and wife Joan began acquiring and restoring historic instruments.

After a trip to Britain in 1989, visiting museums with strict "don't touch" rules, they returned to open their own in the basement of their home, but where their beloved instruments could be played.

"We wanted you to hear things you were not going to hear anywhere in the world. Our ship's piano, for example, was made in 1837 and we play it every day. For many people that is a real novelty."

For the first year in New Plymouth they didn't charge admission, and in the second only asked for donations. By the third year they began charging, but even so it was uneconomic.

"For every $1000 we spent restoring instruments we got $100 back. We realised we had to leave New Plymouth or close," says Lloyd. "All our capital disappeared - we'd put every penny we had into it.

"We'd done well over the years. I was a shop manager for Philips & Impey's and earning a lot of money as a musician with three or four appointments every week, but we spent it all on instruments."

They investigated establishing a museum in Auckland but property prices were too high. Then they heard about Artworks on Waiheke.

With help from Subritzky and Fullers, they moved their collection four years ago into a basement space in the Artworks Centre in Oneroa, and last April shifted upstairs to their present home.

The museum is open every day except Tuesdays, with the Whittakers putting on a 90-minute showcase of the instruments from 1 pm, after which many people stay on to play the instruments.

In the collection are some remarkable, historic instruments, including an experimental model of a harmonium made in Paris by Alexandre Debain in the 1840s. It is one of only two in the world, the other in a museum in Moscow.

Then there are novelty concertinas which produce animal noises and the sound of a child crying, an elaborate Czechoslovakian mouth-organ at least 100 years old, and a beautifully restored piano from the 1880s carved with Egyptian figurines.

And that concert grand Paderewski played in New Zealand.

"He always insisted on his own piano, he couldn't risk going to a concert hall and getting something not up to standard," says Lloyd. "He was the greatest pianist on Earth 100 years ago and he came out on tour in August 1904 and finished in Auckland in September. He sold the piano to a renowned pianist in Auckland, Mr J.B. McFarlane, of Gillies Ave, to save taking it back.

"It was a top-of-the-range Bechstein, in the Gillies Ave house until 1936, and then it came down through three generations to a grandson in Hamilton who heard about us. He wanted it to go to a place where the public were going to see it and it would be maintained and tuned and performed on."

The collection the Whittakers have amassed is literally priceless - they don't sell their restored instruments. But they regularly fend off offers for instruments, particularly from Japanese and American collectors.

For the Whittakers it is more important that the collection be kept together as their legacy for generations to come.

They have their own trust, but admit that if it weren't for their being on superannuation the collection would have been broken up and sold by now.

Consistent funding to keep the collection active and intact is an ongoing problem. They receive small amounts of financial help, but hope that by letting more people know about their treasury of often forgotten sounds they can keep this living asset, one of the country's great museums, open.

Their wish is for a generous patron, and someone who could undertake restoration and keep the museum alive in the future.

"Where else in the world," asks Lloyd, as he points to yet another immaculately restored instrument in the handsome collection, "are you going to find a Steinway square grand from 1873 which is still being played?"

Have visited NZ and listened to your wonderful story. It was the highlite of my visit. Thank you.