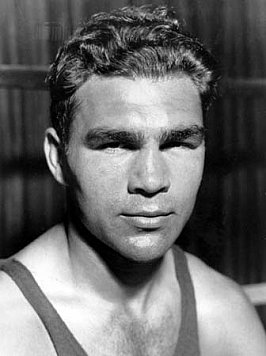 News of the death of Max Schmeling came through this weekend, a man who stood briefly in the spotlight of history. His name will not be familiar to you unless you are interested in boxing. I am.

Beside my stereo as I type this there are a few old slices of vinyl which I play regularly, just for own enjoyment. There's Greatest Rap Hits Vol 2 (Grandmaster Flash, the Sugar Hill Gang and so on), 60s garage band r'n'b by Britain's Downliners Sect, and the first Ramones album.

And there is Great Moments in Boxing in a yellowing sleeve, narrated by Don Dunphy and on the Coral label. That one belonged to my father.

My Dad was a big fight fan and when I was a kid we used to go to the bouts at the YMCA. He was a big supporter of Muhammad Ali and always considered him the Champ. The only place he could lose the title was in the ring, he'd say. No politician or army board could take it away from him.

But mostly my dad's period was before the war so I grew up hearing about Max Baer and Joe Louis, Rocky Marciano and "Jersey Joe" Walcott, Gene Tunney and "Two Ton" Tony Galento. And Max Schmeling.

Schmeling was a German heavyweight who won the title from Jack Sharkey in 1930 in controversial circumstances. The two met at Yankee Stadium on June 12 and at the end of the fourth round, with Schmeling writhing in pain in his corner, the fight was over and ring announcer Joe Humphries told a bewildered, then furious, crowd that Schmeling was the new champ.

Just before the end of the fourth Schmeling -- who had lost every round -- apparently took a low blow. Referee Jim Crowley disqualified Sharkey and gave the fight, and therefore the title, to Schmeling. Sharkey left the ring unmarked, Schmeling was carried out.

Two years later Sharkey took the title back from Schmeling whom many called the "caretaker champion", but the German's biggest fights were yet to come. They were against the great Joe Louis, the "brown bomber" from Detroit who was only defeated three times in his long career. Once by Schmeling in 1936.

Louis, at 22, was on his way up and due to fight Jim Braddock, but before that he had to take on Schmeling, then close to 31. In the short fight Louis sprained both his thumbs in futile punching, and took serious blows to the face from the powerful Schmeling. He was in serious trouble by the fourth, tossing punches wildly, several hitting Schmeling low, and his left eye was closed, his lip bleeding.

In the 12th he was felled by a staggering flurry and was counted out as he held onto the ropes. Against odds of 10-1 Schmeling had defeated the great Joe Louis. There was a riot in Harlem.

A year later Louis defeated Braddock for the title (Braddock needed 23 stitches in face) and then there was the inevitable rematch with Schmeling.

But this time the context was very different. It was characterised as a revenge match for Louis and Schmeling had attacked him in the media fro the low blows in the first fight.

More than that however, it was a political event. With the rise of Nazism in Europe -- the war was just a year away -- and Hitler having snubbed Jesse Owens at the Berlin Olympics the fight was seen as a symbolic conflict between the two rival nations and ideologies.

Hitler said Louis was a man of inferior blood and Schmeling was of the Aryan race, Schmeling could not lose.

There was a nasty feeling in the air when the fight at Yankee Stadium on June 22 1938 took place before a crowd of 70,000. It was the most anticipated bout in boxing history.

The crowd got the victory it wanted, but perhaps not value for money. Within seconds Louis was dominant, he powered a huge right hand sledgehammer into Schmeling's left side and kept up a relentless barrage. Schmeling went down three times and a little over two minutes into the round his corner threw in the towel.

Schmeling lost on a TKO.

Hitler was furious, and Schmeling all but retired. He never fought another major bout and he disappeared into the history books as the war ravaged the planet.

Hitler tried to use him as a propaganda tool and get him to join the Nazi party but Schmeling repeatedly declined. He refused to get rid of his American Jewish manager Joe Jacobs and was forced into the army.

He served with distinction as a paratrooper and was decorated, he fought again in 1948 and when he retired after a few more bouts he bought the Coca Cola franchise and became the head of the company.

He was not the man he had been characterised as before the war either: later it was learned that during the war he had rescued some Jewish teenagers from the Nazis. 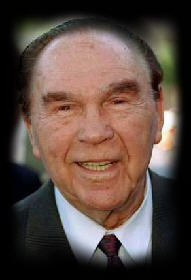 Schmeling was a great philanthropist and remained good friends with Joe Louis who, despite his remarkable record was reduced to being a doorman at Caesar's Palace in Las Vegas. Louis was often down on his luck and broke and Schmeling would help him out. He paid for Louis' funeral in 1981.

In 1975 he said, "Looking back, I'm almost happy I lost that fight. Just imagine if I had come back to Germany with a victory. I had nothing to do with the Nazis, but they would have given me a medal. After the war I might have been considered a war criminal."

He may have only stood in the spotlight of history for a few brutal minutes, but he went the distance.

When Max Schmeling died last week he was 99.

This first appeared at www.publicaddress.net in February 2005

the art of dyingthe ramones