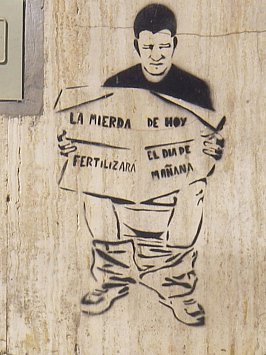 You can’t help notice that the skin of Buenos Aires is heavily tattooed: not just with graffiti, but by large and vivid murals, and spray-on stencil art. You can spend a lot of time looking at the walls of Buenos Aires.

Many murals are clever and colourful but the graffiti -- mostly just tagging -- is as absurd and incomprehensible as any. There are whole areas of the city which look like New York’s Downtown in the early 90s when even the most substantial piles of immovable 19th century stone were tagged beyond recognition.

The graffiti may be a blight on many of the historic buildings -- few are spared -- but the small-scale stencil art which is also everywhere can be witty, pointed and political, or sometimes just bewildering in its diversity, humour and artistry. 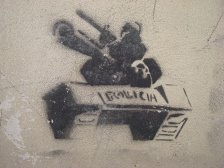 You get the impression Buenos Aires wears its thoughts on its flesh: there are stencil art images of military oppression and police brutality which remind of the Dirty War of the 80s; feminist and gay activist slogans; bands announcing CD releases or gigs; Michael Jackson with the caption “I am Peter Pan”; monochrome images of Bob Marley, Kurt Cobain and a Star Wars storm-trooper which vie for wall space; eye-catching advertisements for websites; funny images of James Brown and people on motor scooters apropos of nothing . . .

Many have subtexts perhaps only available to locals or those who speak idiomatic Argentinean Spanish, but others are simply miniature masterpieces of design where a few bare lines created the image.

Others are just amusing. What should you make of Tigger or the Blues Brothers stencilled on a wall?

Some, such as shadowy military figures or police pointing guns directly at you can be chilling. These are messages, prompts to conscience and historical resonators directed more at locals than visitors.

There is so much wall art in Buenos Aires that movements have emerged, galleries are dedicated to it, photos of it have been collected in large format books and some of the artists have become celebrities feted by the mainstream art world.

In the small Appetite gallery in the suburb of San Telmo you can see the distinctive cartoon-like work Gualicho (aka Pablo Harymbat) whose colourful murals and “neo-graffiti” have appeared all over this city and in other Latin American countries, and latterly in galleries.

Although little known outside of Argentina, Mussoto’s work was exhibited in New York last November when Appetite was represented at Pinta, the inaugural Contemporary Latin American Art Fair. 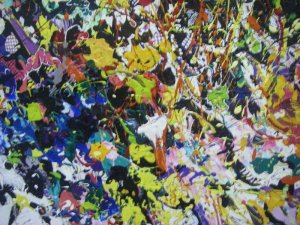 Her post-modern work bristles with ideas and energy, and in that she is also an emblem of the vibrant creative scene in Buenos Aires which largely exists off the radar of the international art world.

Within Appetite also are the photographs of Yamandu Rodriguez which -- for many -- will blur the line between voyeurism, erotica and pornography; and Appetite might be a small space which spends its nights behind a graffiti-covered roller-door, but it can be read as a microcosm of the breadth and ambition of Argentinean art today.

At the other end of the spectrum is the architecturally beautiful and spacious Malba, the Museo de Arte Latinoamericano de Buenos Aires, which opened in late 2001. It houses an exceptional collection of 20th century, and more recent, art from around Latin America.

Malba’s collection includes work by Frida Kahlo (Self Portrait with Monkey), a Cubist-influenced work by her husband Diego Rivera, a typically dark Roberto Matta from the early 40s, and an astonishing piece of timber sculpture by Pablo Reinoso in which wooden slats from a park bench grow and climb the gallery walls like thick jungle vines.

Elsewhere there are bold works by Ernesto Deira (1928-86) which seem possessed by a violent, sexual energy and rage (Nine Variations Over a Well Stretched Canvas from 1966, the small scale drawing of which is almost an exact miniature), post-Oldenberg constructions by Norbert Gomez, and photography by the internationally acclaimed Chile-born, New York resident Alfredo Jaar.

It was Jaar’s images of workers in Brazilian gold mines in Brazil and the Rwanda holocaust which brought global attention to those particular horrors of humanity.

By contrast there are also the bright, bold and somewhat mystical watercolours from 1923 by Xul Solar who has his own museum across town.

Small museums and galleries are sprinkled across Buenos Aires, but few have attracted as much international attention as Malba -- or the newly renovated Fundacion Proa in the increasingly developing La Boca area near the brutally polluted canal. 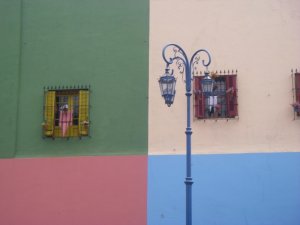 Working class La Boca often comes with warnings for tourists. But the fact dozens of tour buses pull in every day so visitors can take photographs of the colourful old houses (now repainted for their benefit), tip in a hat while watching tango dancers on the streets and be assailed by cliched watercolours or oils of the same things, tells you that these streets around Proa are quite safe.

It is the contemporary art inside Proa which may be more challenging.

The buildings itself is, as with Malba, of elegant and minimalist design, the restaurant with roof patio a welcome respite from the tango kitsch on the street below, and the large bookshop offers innumerable fine texts and collections of photographs of old Buenos Aires -- the city before the taggers, graffiti kids and stencil artist took over.

That said, many walls in Buenos Aires today demand to be photographed for their diversity, and I took dozens of images of the stencil art alone.

Among the most pointed was one in English on the main thoroughfare of Avenida de Mayo. It was of an angry figure posing in silhouette and read, “I’m not a tourist. I live here.”

Yes, I got the message.

But I took a photo of it anyway.

For more examples of graffiti art from Buenos Aires see Wall Art in Elsewhere. For travel to Argentina see www.howdybuenosaires.com. Elsewhere also has a profile of the legendary Argentinean tango singer Carlos Gardel.