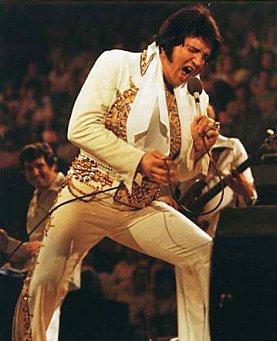 John Lennon was only half right when, on being told that Elvis Presley had died, said, "Elvis died when he went into the army".

In part that was true: before his posting to Germany Elvis was the archetype for rock'n'roll; after the songs got soft and the Hollywood movies rolled out with increasingly dreary predictability.

There were of course continuing flashes of greatness: the '68 Comeback Special on television, the subsequent recordings collected on The Memphis Record (an Essential Elsewhere album) and even the That's the Way It Is doco which captured the man's humour as much as his musical genius.

And as astute commentators like his biographer Robert Gordon always remind us, those tragic fat Elvis days were but a few years at the end of a long life during which he mostly looked pretty damned good and, even if the songs weren't as great as they had been, the man could still sing.

His death on August 16 1977 was just the final act in a great American tragedy, one that seems to have been echoed in Michael Jackson's career. The King of Rock'n'Roll and the King of Pop shared more than just a love of Lisa Marie; both unwound in a downward spiral of self-delusion and prescription poisons.

But the Elvis Presley story was also full of great songs and performances as the many box sets have reminded, even into his final years.

Yes, the "king is gone but he's not forgotten" as Neil Young sang, but as time goes by the music unfortunately has faded and the myth and marketing have taken over. You can't go back, but sometimes just listening to his earliest work you realise his greatness beyond being a cultural touchstone.

Elvis didn't die when he went into the army, he died in the place he felt most safe, his home in Graceland.

We've just done the blues highway, drove from New Orleans to Memphis in a Mustang convertible.

We spent a couple of hours at Graceland, simply because, like Elvis, it is so iconic. that's a word that gets overused, but it's really apt here because of its original use as a religious artefact. Just as the Vatican in the past made millions selling splinters of the true cross, at Graceland you can buy Elvis memorabilia from any one of the 13 gift shops. The tour is highly sanitised - no more mention of the last few years, nor even how he died (a prescription drug cocktail in an overweight body) - and at the end of it, you're left with a sense of "only in America": only America could produce this prodigious talent from a small rural town in Mississippi, where a white-skinned man could be steeped in the black sensibility (his moves came straight from the juke joints that used to dot the area). And only in America could you commercialise every last aspect, every atom of Elvis' being.
I have only two Elvis albums - the essential Memphis and the 68 comeback special. To understand the man's genius, you need only look at the comeback special. He does an unplugged set live with his pals which is just astonishing. His vocal power in the recorded pieces is peerless. And his intensity as a performer, his sheer sexiness, is unforgettable. Watch and weep that it all ended too soon.
There is a room at Graceland dedicated to the comeback. His leather suit is there, the guitar he played, the whole story on a short doco. And when you exit, you will find yourself in a comeback special-themed gift shop.
For all that, there is something weirdly compelling about it all. For the last 30 years I've had the words of Paul simon in my head: "the Mississippi delta was shining like a national guitar/I am following the river, down the highway through the cradle of the civil war/I'm going to Graceland, Graceland, Memphis Tennessee ... For reasons I cannot explain some part of me wants to see Graceland, Graceland, Memphis Tennessee".
And I'm glad I did.