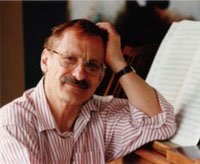 The music skitters off the disc as the Greek fiddle player takes to the tune at alarming speed, the notes slewing into each other.

The piece is Horos Serra, recorded for a 1973 collection, and it captivated Wellington composer Jack Body so much that he transcribed it. No mean feat, given the density and difficulty of the piece which lasts a little over three minutes.

"The rhythmic cycle is quite complex - it's 5-5-4 - but I only discovered that by slowing the tape to quarter speed, then writing it out.

"Then you take it back to full speed and think, 'My God, is that true?' because it's so fast and you can't count it.

"Transcribing is an amazing world of trying to understand our comprehension of music."

Body, an associate professor at present on leave from Victoria University's school of music in Wellington, has spent almost four decades trying to get under the skin of diverse music.

The Greek tune appears on a new, double-disc collection which pairs nine original source pieces with Body's transcriptions brought to life again by various musicians and ensembles, among them the NZSO playing Horos Serra plus a piece by an Indonesian flute player and another by an Indian street band Body recorded in Pune.

The collection, Pulse, on the Rattle label, is the first time Body's sources and transcriptions have appeared together and back-to-back comparison allows the listener to sense some of the resonances of the original music, and appreciate the craft of transcription and recasting for other musicians.

The common thread in Body's sources - which include pieces by West African kora player Foday Musa Suso, a folk group from Bulgaria and a Chinese recording of an instrument like a Jew's harp - is they all immediately engaged and fascinated him.

"There was something about them I wanted to unravel. Notation is one way of pinning sound down but of course it means nothing when it is pinned down.

"You can see it, but it only means something when it comes to life again as sound."

And so Body recasts them - often fairly literally but sometimes, as in the case of NZSO's rendering, within a cocoon of sympathetic music which creates a coherence between otherwise disparate pieces.

"I often set out to take the music elsewhere but through transcribing I get to admire the originals and become attached to them. So if you go somewhere else you can end up with something less than the original which was so compelling."

Body also notes the source material is often highly sophisticated even though the musicians, sometimes itinerant players wandering through small Indian or Indonesian villages, may be untutored.

Of course a transcription can never recapture the original instruments or voices, or the important ambience. Which is why when Body recorded street musicians in Yogyakarta, Indonesia, back in the late 70s, for the album Music For Sale he wasn't unhappy background street noises and bird song were also audible.

And watching itinerant players - some of whom were paid to go away by local shopkeepers - also made him question the function and nature of music, and the experience of the concert hall as opposed to the market-place.

Body had travelled overland from Europe back to New Zealand in 1971 and in Indonesia found a temperament which appealed to him. He returned as a guest lecturer at the Akademi Musik Indonesia in 1976. Having to learn a new language - both spoken and musical - led to a passion for investigating and transcribing what is now commonly called "world music," a description he finds mildly troubling.

"It used to be world music in record shops was authentic traditional music. Now it is a fusion of styles. I guess I'm involved in [the fusion] myself, but it seems so often fusion bastardises the original music."

Body says the biggest problem in notation and re-presenting has been in the way particular instruments and voices articulated the source music. Composers use notation as a tool but because it cannot convey other more elusive qualities Body has attempted to find other ways of communicating those, notably through multi-media and installations.

He has explored the dynamics and potential of electro-acoustic instruments in his search for the meaning behind the meaning.

He has also created local gamelan orchestras which are inclusive because they allow for many levels of musical ability. Some instruments are simple, "and there are some which require greater aptitude and application and practice".

Earlier this year Body facilitated the interaction of a gamelan orchestra with the choir of St Mary of the Angels in Wellington which has a strong tradition of singing plain song, a style which has much in common with the modal nature of gamelan.

Its success has sparked the idea of a plain song mass with gamelan for the end of the year.

Body is also programming a three-day festival of New Zealand music in Amsterdam in November, and working with Chinese musicians to compile an archive of rare field recordings of traditional music from Yunnan province.

His long-promised opera based on the life of Wellington drag queen Carmen lurks in the background "and next year the NZSO is committed to producing a section of it, a concerto for guitar and orchestra ... [but] it's kitschy, outrageous, silly and over the top."

But Body's longtime passion has been the bringing together of musical cultures and to this end he has invited guest musicians from South-east Asia to Victoria where they teach and perform. As an exercise Body's students transcribe this traditional music, then create their own compositions using it as source material.

"But I encouraged them to integrate the original musician into composition."

Which raises questions of musical interactions, tunings, and communication when the guest player doesn't read music or hasn't previously performed alongside Western musicians. The result, however, is exciting and productive dialogue between cultures and musics.

The evidence on Pulse, collected from recordings made during the 90s, is also that Body's transcriptions translate well across borders and cultures.

"I'm fascinated by the transcription process. It shows up the dislocations created by notation, by my perception of the original sound and by the performance practices or techniques which recreate the music - all the imperfections which come with the translation process.

"One tries to be as faithful as possible, but the music does change - and you have to think how and why." 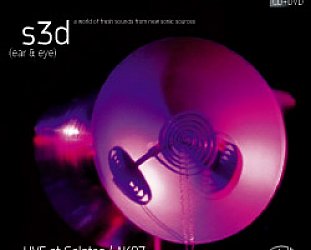 In 1996 Ellipsis Arts in the US released a CD and book package entitled Gravikords, Whirlies and Pyrophones: Experimental Musical Instruments. It was compiled by Bart Hopkin who had edited the... > Read more