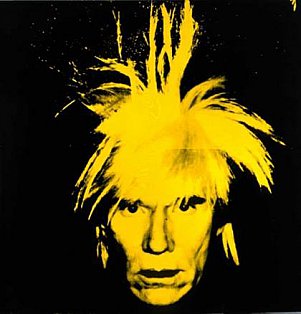 “People are always calling me a mirror and if a mirror looks into a mirror, what is there to see?” -- Andy Warhol.

There's a scene in an Austin Powers movie in which the superspy and international man of mystery is in his London bachelor pad. Amid the iconography of the Swinging Sixties is a large multiple portrait of Powers rendered in flat, garish colours. In its signature style it could only be by one artist.

Even now -- twentysomething years after his death and more than 45 since establishing his distinctive portraiture style with screen prints of Marilyn Monroe - the work of Andy Warhol is so immediately recognisable it can be parodied and paid homage to, recreated in the artist’s absence - and allow us a smug snicker of recognition.

If Warhol had known Powers back in '69 he undoubtedly would have done his portrait - and it makes no difference that Powers is fictional. In some senses Warhol doesn’t seem to have existed either. He just was.

But what was he? Genius or charlatan, artist or advertising man?

Andy Warhol - the youngest of three sons born to a Czechoslovakian immigrant family in unglamorous Pittsburg in 1928 - was the Chauncey Gardner of the art world, the empty mirror, the blank slate.

His most recognisable expression might have been a yawn, if he hadn’t been so wearily detached as to be bothered opening his mouth.

Gore Vidal said he was a genius with the IQ of a moron. But, the argument goes -- and it could only be developed by some one who hadn’t read a Naomi Campbell or Jackie Collins novels – no one that rich can be that stupid. 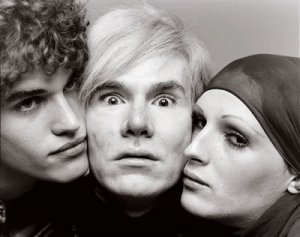 Debate over whether Warhol more properly belongs to the history of art or the history of marketing were rehearsed again with the touring exhibition The Warhol Look: Glamour Style Fashion in the late Nineties.

Significantly the extensive exhibition, curated by the Warhol Museum, came with a slew of tie-in merchandising and was mounted in Very Serious Art Galleries.

Warhol, whether you like him or not, has been enshrined and canonised by the establishment. He’s in the history books and proper galleries, has his own museum in Pittsburg and people looking after his licensed product in Germany.

Art or commerce? It hardly mattered then, it certainly doesn’t now.

But this exhibition was about fashion rather than art, so there’s not the comfort of the familiar Famous Soup Can here. Rather, it was a deep immersion into the shallows of Andy-world.

Yet if Warhol himself will always remain an increasingly elusive and neutral figure, taken together this show offers a self-portrait refracted through diverse works across several fields.

From the Forties, when Warhol was a fragile art student (he’d had three nervous breakdowns before his teens), we see something of his obsessive collecting of movie star and glamour photos from magazines.

The title of this section, At Home with the Stars, is a clever crock: the stars weren’t at home, but insecure and unattractive Andrew Warhola was, melding his anxious dream life into theirs -- and collecting what would become his raw material.

“Today everything is badly made," his mother said in 1973, “and those beautiful things he loves, like the old movies, were better made.”

The Fashion Tips with Andy section collects some of his commercial illustrations and window designs from the Fifties. There are recreations of shop window displays for swanky New York stores such as Tiffanys and Bonwit Teller – and here is a hint of an alter-Andy: there’s a youthful playfulness to his commercial illustrations redolent of Jean Cocteau, Ben Shahn and Erte.

For those who would dismiss him on the basis of his later work, here is proof too that he could draw – although some (Joan Crawford, 1962) look like the kinds of clumsy portraits preteen fans used to send to the Beatles around 1964.

His fascination with shoes as fetish objects is well represented in illustrations and painted lasts. Here too are effigies of Warhol, the perfect substitute for a man notable for his emotional absence.

The Sixties are represented by Autopsy at the Factory, Warhol’s famous silver-lined downtown warehouse space which became a mecca for freaks -- and then the fashionable. 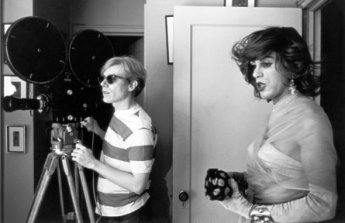 And through those doors came Bob Dylan, poet Allen Ginsberg, homeless drifters and other detritus of the Great Society. And the Velvet Underground (no footage in this exhibition; presumably Lou Reed’s lawyers were as protective of their client as Warhol's), Valerie Solanis who would shoot Warhol in 1968, “superstars” off the streets, drag artists and wannabe film stars who became the subjects of his passive, often non-narrative films which even the catalogue concedes are more fun to talk about than sit through.

“I like the boring things,” he said at the time, as if that would excuse any old drivel. For his acolytes it did.

The exhibition includes his films Poor Little Rich Girl, Chelsea Girls and Bike Boy, and screen tests for the beautiful but doomed Edie Sedgwick, poet John Giorno, and a dozen other Factory regulars whose talents (aside from Dennis Hopper) would never translate much beyond 231 East 47nd Street.

Thereafter chronology and categorisation is disassembled through Drag and Fashion and Uptown/Downtown because after the Sixties -- being shot seems as pivotal to Warhol’s career as Dylan’s motorcycle accident or Lennon meeting Ono -- Warhol traversed the art and commercial worlds as a dung beetle does a desert.

His autographic style became codified and frozen, more cool and deadpan, and the elimination of decision-making about rendering of surfaces eliminated both his personality and that of his subjects from his Polaroid portraits.

Interview magazine -- of which the exhibition has a number of displays of covers, photospreads and fashion shoots -- became his in-house vehicle to flatter and pamper the Uptown set.

His works in the Seventies and Eighties, as he moved away from freaks to the fashionable, proved only the power of a cheque-book and, like a moth attracted to the brightest of lights, his tiny wings beat against the famous and the feckless.

He might not have been a genius but he had a gift, and in that captured the Zeitgeist of consumerism in the Eighties. He did ads for rum, appeared on The Love Boat and fashion catwalks, and died eight months before the stockmarket crash which sent the crowd from Studio 54 -- his substitute Factory – into rehab or real jobs.

Black Tuesday might have been the end of what critic Robert Hughes called Warhol’s “supply-side aesthetics” but, as with his beloved Marilyn, death can be a good career move.

The Pope of Pop was gone; long live the mandarins of marketing.

So, how to define the Warhol style?

His work across an indiscriminate spectrum is enticingly insipid, transparent, endlessly repeatable, neutral and neuter. It is the atrophying of expression and gestures of effort, a Rorschach abstract in which we locate our own meaning.

In the Eighties Warhol may have reinvented the genre of portraiture, but in it he became as fraudulent as Dali, a court painter to the profligate rich for whom his signature was like a passport into the Kingdom of the Chic.

His vacuous portraits -- blanded out into outlines and flat colour -- hardly bear sharing a genre with Goya’s portrait of Queen Maria Luisa, or Sir Joshua Reynolds.

The coalminer’s son from Pittsburg was now delivering to women who lunch, their Uptown husbands a vindication of their lives, an elevation to the level of Marilyn and Liz, Elvis and Joan Crawford by Andy-association. Under the eye of the Warhol Polaroid anyone could become a secular saint. 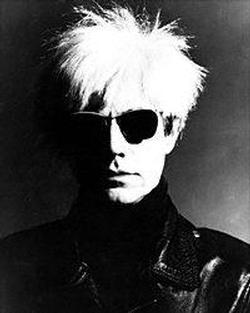 All you needed bo do was pay for the privilege.

As with his films and interviews in his magazine, his later work carries no special weight or virtue beyond his name being attached to it, like a Calvin Klein tag on a shirt collar Warhol liked that about it.

“If you want to know all about Andy Warhol,” he said, “just look at the surface of my paintings and films and me, and there I am. There’s nothing behind it.”

That very affectlessness of his art lies at the heart of Warhol’s career and still attracts hostility But Warhol was about reversals: he inverted the order which said celebrity followed work well done, and where art was about the one-off unique object he made multiples.

He found his superstars on the streets and the artist was as important as his subjects.

The Warhol Look is a blockbuster by an icon whose name is as synonymous with merchandising as art - and its subject, being at that profitable interface, lends itself to heavyweight promotion.

And all because of an opaque little man who became his own greatest creation.

The enduring, perfect Warhol statement is in the exhibition: one of his wigs, framed. No face beneath it. The invisible man, only able to be seen through his work.