The phone call is an hour late and catches Felipe Fernandez-Armesto at dinner with his father-in-law. Apologies are cheerfully rebutted by impossibly rounded vowels which roll across the global link direct from Brideshead Revisited.

My apology includes how I relied on an international telephone operator to calculate the time difference -- and assumed she would tell the truth.

He finds this enormously amusing. This is encouraging because Felipe Fernandez-Armesto is an Oxford don, has been a member of the Modern History Faculty at that venerable institution since 1983, has his works translated in 20 languages and is one of life's Big Thinkers.

His writing includes studies of Columbus and the Spanish Armada, he has edited The Times Atlas of World Exploration, The Times Guide to the Peoples of Europe and The Global Opportunity.

His recent books have been the blockbuster 800-page history of the past 1000 years (entitled with marketable simplicity, Millennium) and Truth: A History and a Guide for the Perplexed.

Fernandez-Armesto expresses delight at talking to someone from New Zealand because he‘s staying in a room called Villa Maria (“do you know that wine?”) in Tunbridge Wells.

Fernandez-Armesto proves a witty, self-deprecating and digressive speaker who rejoices in words and ideas aplenty ideas to fill books and conversation, ideas which offend in academia.

“I always try to give equal offense all round because I think that’s fair” he says about Millennium which reconfigures conventional Western historiography.

He expected to be assailed for his thesis about China being the fulcrum of world history and a major shaping influence on other cultures as the place from which the historical concept he calls “initiative” radiates.

“I also expected to be assailed for my dismissal of Marxist historiography and my claim Africans were participants and collaborationists in their own colonisation, and there were black empires every bit as ghastly as white ones.

“I was expecting people to challenge me on those fronts but actually they focused more on the almost minuscule and insignificant details.”

“One of the reasons people in New Zealand like my book is there are many books on world history and New Zealand is entirely overlooked. And relatively speaking I give it a fair old billing with a long description of Dunedin - which, for all I know, maybe entirely wrong,” he laughs. 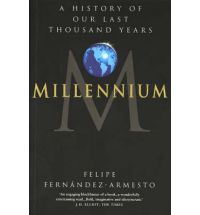 New Zealand is mentioned in the context of the rise of Pacific Rim culture which, along with the break-up of the large federations (Britain and the United States included), the decline of cities and other speculations, makes up the book's epilogue.

Unlike his populist predecessors such as Kenneth Clark, whose Civilisation embraced the notion of human history as a progression, or H.G. Wells whose The Outline ofHistory bannered the triumph of European civilisation, Fernandez-Armesto’s view is more global and personal.

It opens with a recollection of Prunier’s elegant restaurant in London (now a Japanese restaurant, which he finds a metaphor for counter-colonisation among other things) and concludes in the fictional Alice’s Restaurant where “you can get anything you want,” as the song of the same name said.

Between these points, he looks at the shifting tectonic plates of world history and how, at some distant future, the accumulated detritus of our times would appear to some galactic museum keeper.

He sees a Coke can-alongside artwork and is delighted when told there is a museum not dissimilar to that in this country, Te Papa.

The don likes the fact that those who subscribe to a hierarchy of culture are miffed by such thinking, as if a painting were more relevant than the radiator of a Ford Prefect.

"My father-in-law, with whom I’ve just had dinner, would find the radiator of an old Ford Prefect very uplifting. He’s a passionate engineer, his soul is ignited by things which mean nothing to me.

“Whereas he can blink in indifference at some arty artifact which will move me tremendously.

“The trouble with hierarchies of taste is they are always this person’s taste or that person’s taste. When we create a museum of the Bronze Age, if somebody from the Bronze Age came back to life they’d be absolutely aghast. All these belt buckles and bits of rotting old handles don't represent what they thought was important and would claim our assortment of artifacts is entirely unrepresentative of their culture.”

Yet these are the basis of our image of what they were like.

“I think if that museum in New Zealand is preserved intact for the inspection of future scholars at a time when New Zealand no longer exists, it will be a fascinating source of study. They will be able to form an image of the diversities of the country.

“I'm sure it won’t be the same as we have of ourselves, but that doesn't mean that it’s wrong. If we think we know ourselves better than someone looking at us objectively is going to know us then we’re deluded.”

When Fernandez-Armesto laughs wickedly, he seems well aware that he can wind people up. He certainly wound some up with Millennium in which he wrote that Western liberalism “enfeebled by its inconsistencies, seems bound to be wish-washed away by a new wave of fascism.”

“One of the signs of the loss of confidence of the Left is they’ve abandoned that air of moral superiority, the old puritanical Left which owed as much to Methodism as to Marx and was always wagging its finger at people reprovingly and telling them how socialism would make them better in a moral sense.

“I think socialism should recover its old confidence. I think the worldwide eclipse of the Left is probably going to appear like a very a brief phenomenon in our history.”

In the past 100 years, despite the recent battering taken by socialism, the Right has absorbed far more in the way of influence and readjustment of scales of values, and social and political priorities.

Fernandez-Armesto warns against religious fundamentalism which he sees, along with secular fascism, as being inflexible prescriptions of society, “the hectoring of noisy little men.”

“Christian fundamentalism has the potential to warp world history probably even more menacingly than Islamic fundamentalism. But I don’t want this to sound too pessimistic – although pessimism is a very good thing for people to cultivate. It indemnifies you from disappointment. I recommend it to everybody.”

He predicts broad Christian, Buddhist and Muslim faiths will continue to be the major world religions, “and people who’ve been lost to fundamentalist directions and weird crackpot sects and cults will return to a more rational, moderate and mainstream tradition. Crackpot sects and cults, religious extremism and millenarian fanaticisms have come and gone throughout our history -- but they’ve always gone and the mainstream persists.”

As much as he is an observer of historical trends, Fernandez-Armesto reads the character of nations and peoples. American language is direct, he says, because in the great melting pot it has had to be. That means you can’t be oblique “and the case people always use is irony, Americans just don’t get the tangential approach to meaning.

“So there’s this compulsion to be direct. And on the other hand you have this elite in America which is extraordinarily over-educated, a mandarin-age which wants to play word games and is overcharged with currents from Europe.

“It takes relativism, post-structuralism and deconstructionism with a degree of seriousness which those rather jokey schools of thought don’t merit. You have got a huge mandarin-age churning out manipulative formulations and professional gobbledygook.

“So there are those two mutually contradictory tendencies in America. There is a great gulf of misunderstanding opening up between the elite and the rest in America."

Not that there will be a United States of America. The Pacific coast states will become increasingly allied to Pacific Rim nations and “there’s this extraordinary phenomenon of a state’s rights which will surely grow as America matures.”

“American states look like purely artificial constructions but many have already acquired, or are in the process of acquiring, strong identities of their own.”

There is a dark side to his speculations, however. In Millennium he also writes well-meaning liberals will continue to advocate abortion and euthanasia without realising they are forerunners of death camps and eugenics.

Big states will effectively repress the aspirations of smaller peoples and “decision makers will go on winking at warnings, as they have always done and the world, I feel tempted to conclude, will go on getting worse.”

“This is meant to be a comforting glumness,” he writes, “which reduces prospective cataclysm to the dimensions of mere disaster."

And so this is it, our known world fragmenting, no great prospect for humanity?

“Well, you don’t need to read my books to tell you that!” laughs Official Big Thinker Felipe Fernandez-Armesto. “Just look around and see what’s happening. It’s ridiculous to say we haven’t made progress in a technical sense, but the paradox is that it hasn’t delivered one iota more of happiness or solved much. Progress is always, in part, progress in the multiplication of problems.”

And on that rather cheery note?

“That is cheering, isn’t it? Imagine what life would be like without problems - and those of us lucky enough to go to heaven will have quite enough of that when we’re dead.”

A hot Monday morning and I'm sitting outside of what remains of the old Alamo in the centre of San Antonio, Texas. From here the Crockett Hotel looms above the old mission, and street cars and... > Read more