Some months ago the Auckland photographer Chris Van Ryn, whose innovative and often moving work I have long admired, told me he was putting a collection of some of his images into a book. I was genuinely excited for him because it meant his work would get to a wider audience.

He asked me to the write the foreword.

The book is now published -- a handsome volume where Chris writes a short and insightful comment on each image.

Rather than me review it, it is perhaps best to simply repeat here what I wrote . . .

Photography is a relatively young art form, but one which is increasingly cramped and crowded.

It rather states the obvious to note the availability of technologically refined cameras – not to mention the power of a computer to manipulate images – has meant anyone with the equipment, even the most basic, can be take a photograph. Sometimes a very artistic one.

But it is not the camera which captures the image and freezes that moment forever, it is the mind behind it.

And that is what separates a photographer from those many of us who take photographs.

The photographer is that rarity; the person who has a guiding ethos, some singularity of vision and purpose, enough to build a portfolio of related and resonant images and not just settle for the impressive one-off.

A couple of years ago I was in Buenos Aires with Chris van Ryn who would capture shadows and light in a way I found engrossing. His eye was attuned to chiaroscuro in a sidestreet, the edge of abstract shadow on a pavement, the way the flat midday light hit a wall of coloured flowers, or the hazy mood at dusk brought out odd tonal elements and strange juxtapositions of colour.

And he took photographs of people with the same sense of shape, light, construction and discovery.

Chris' work with people however is also driven by a need to explore the life within, to probe and question in a deeply philosophical way just how their lives – and by extension our own – are shaped by circumstance and social condition.

As with a photographer like Don McCullin – whose portraits from the hell-pits of Vietnam and Biafra brought strangers' lives into our own emotional space – Chris, in this collection of portraits, allows lines on faces, a glazed eye or gnarled, world-battered bodies tell their own story. 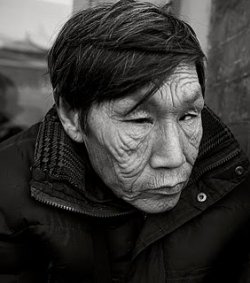 Into these sometimes stark and abrupt images we may project our own experiences in such places or with similar people. We may even see our own “bodyography” in times past, or in times to come.

In the young subjects Chris is able identify a feature which may shape and perhaps scar a face into old age, in the old he lets the sinew and texture of the skin be their own visual signifiers.

Here are images of the malleable children yet to be shaped by forces beyond themselves, and of the the broken and bent at the far end of life's journey.

But as much as there is sadness and woe here, so too there is laughter and promise. Hope even.

If one image here is striking for me it is Links, the portrait of five children in the holy city of Varanasi.

With arms entwined as if in a sculpture by Bernini, we have interrelated themes: of the interconnectedness of people; of the universality of children's' expressions when caught in that slightly self-conscious moment; of the joyful innocence of a moment in childhood when the indifferent world is yet to do its damage, or reward by chance.

Yet look closely and each child has its own expression: between them we see the wary and the slightly frightened, the engaged and the distant, and the distracted. There is an equal measure of confidence and uncertainty, fear even, in these young faces.

To capture an image such as this – seemingly so simple, so casual and fleeting – requires more than just the opportunity and luck.

This is art and eye of a photographer at work, that singular artist in an overcrowded medium who can recognise the moment and see the emotional or philosophical weight within it.

Then we turn the page and see an ancient holy man in the same city whose very flesh is a map of life.

And so for Chris van Ryn – and us – a new story unfolds.

For more of Chris' images, the most recent from Gaza, or to order a copy of Bodyography go here.