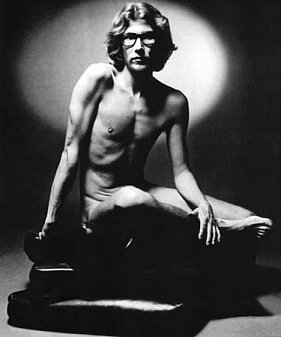 While there's no argument about the genius of fashion designer Yves Saint Laurent, the jury is still out over his artwork. In my family, at least.

After a visit to Jardin Majorelle in Marrakech – one of his former homes with partner and business manager Pierre Berge – I observed his posters in the Galerie Love (heavily laden with the word “love”) looked like hippie-era doodles.

“Bloody awful,” was my considered verdict and my son laughed in agreement, then warned me with a look we were about to be challenged on that. My wife and his partner saw them very differently and had been quite charmed.

We did all agree however – as I suspect every visitor to Jardin Majorelle would – that these gardens with their cacti, yucca and palms are quite something in their own restful way. Here are discreetly placed shaded areas, water features of still ponds with lilies, gently trickling fountains and the vivid blue former home of Saint Laurent and Berger as a dramatic and eye-catching centrepiece. 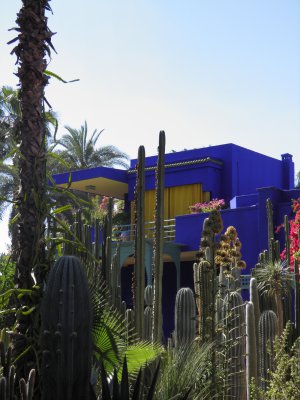 The garden's location outside the old city wall also offers a glimpse of a rather more ordinary, less touristy Marrakech than that around the exciting, noisy and colourful Djemaa el-Fina plaza at the heart of the city's medina.

Out here in the rather more workaday world, school students and shopkeepers jostle for space on rugged footpaths, children dodge taxis and donkey-drawn carts on the horn-blasting roads, and pedestrians – with greater faith in their fellow man than I have – amble hand-in-hand across intersections and roundabouts between a chaotic implosion of scooters, cars, trucks, buses and carts.

All of which make Jardin Majorelle an even more restful respite amidst the heat, haste and dust.

Although Berge and the late Saint Laurent – whose ashes were scattered in the garden in 2008 after his death in Paris – are most commonly associated with this very special place, it takes its name from its original owner.

The artist Jacques Majorelle bought the property here in 1924 when Morocco was still a French protectorate and began landscaping the sandy soil. He brought together a dizzy array of local and imported plants, offsetting them with the astonishing blue paint on the buildings which today takes his name. Equally striking however is the burnt orange or vivid yellow of large vases which are deliberately placed in corners against the “bleu Majorelle” walls where the contrast can be dramatic. 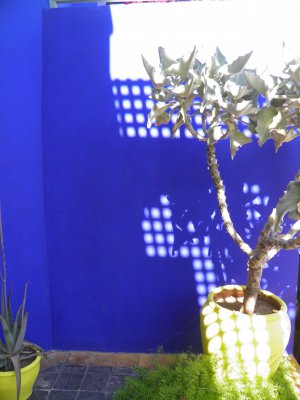 You can't be in a hurry in this garden where bougainvillea and jasmine drape above your head because there is so much small detail to enjoy, and inevitably someone on the narrow pathways with a camera waiting for just the right moment.

Coupled with clear light on a cloudless day, Jardin Majorelle is a photographer's dream location as hard edges of pure flat colour shimmer in bold contrast.

Doubtless the light and warmth of Morocco were part of what drew Saint Laurent and Berge here, but the designer also found the familiar.

He had been born in Oran, Algeria where he lived until he moved to Paris at 18. So in Morocco he used the vibrant local colours, textiles and designs of North Africa which he adapted for many of his dresses in couture collections from the mid 60s onward.

Some of his clothing conspicuously referred to the djellabah, those ankle-length, hooded robes familiar in so many Muslim countries and visible everywhere on the streets of Marrakech.

Saint Laurent also designed turban-like headwear and was drawn to the bright flat colours or multi-coloured broad stripes of Moroccan material which even today are stacked high in tiny shops, offering walls of rainbow-like hues.

"When Yves Saint Laurent and I arrived in Marrakech for the first time in 1966,” said Berge in 2008, “we didn't know this town would play such an important part in our lives, that we would buy three properties there including the famous Majorelle gardens. Nor did we know that Morocco would become our adoptive country, our second home."

The couple – then partners, later separating but remaining in business together – bought Jardin Majorelle in 1980 when it had slid into neglect and disrepair after the death of its original owner. They set about restoring it – with the help of, among others, the American architect and designer Bill Willis.

A long-time Marrakech resident and notorious drug user who counted a few Rolling Stones and writer William S. Burroughs among his friends alongside various Rothschilds and Getty millionaires, Willis – who died in 2009 – was a close friend of Saint Laurent and Berge and designed villa interiors for the power couple in their Marrakech retreats.

"I remember we used to drive up to the mountains near Marrakech,” he said. “We would see Berber peasant women carrying their bundles of firewood who wore the most wonderful colour combinations – [Saint Laurent] inspired himself a lot from that."

The extent of Saint Laurent's passion for the colours of this country was evident in an exhibition at Jardin Majorelle in November 2010 which featured 44 of his Morocco-inspired haute-couture designs, all notable for their vivid tones. Often he found new inspiration in the colours of the city where rich blues, pinks, reds, gold and orange are so prominent.

“This city lead me to colour,” Saint Laurent once said of Marrakech. And later he observed, "There are gardens in Marrakech, for which I have a real passion. And the colours that I miss in Paris."

For the designer, Jardin Majorelle was also a retreat from his increasingly debilitating lifestyle in Europe which was fueled by his cocaine and alcohol addiction, although initially it seems he hardly moderated his intake while in Marrakech, perhaps just reining in the excesses of the social whirl which attended it in New York's Studio 54 and Paris. Jardin Majorelle was a place he could be dissolute but monastic. 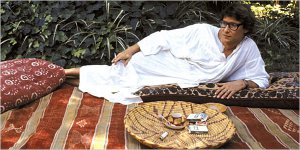 Here, in the gardens he loved, he felt at ease. Photographs of Saint Laurent at home frequently show him bare-footed or in sandals, wearing a djellabah and relaxing with ever-present cigarette packets close to hand.

Often he would come here immediately after showing a collection in Europe to relax and perhaps – Berge has described him as a manic depressive – to collapse. Jardin Majorelle was a place where a man could live softly and unassailed. The walled garden offered solitude, safety and the possibility that for days, if not weeks, the public man could be private. And perhaps be himself.

These casual days and nights were rare in a life of fastidiously dressing up, and of fashionably dressing others.

French socialite Christine Alaoui who conducted soirees for the visiting glitterati at her Marrakech home Bled Roknine – used in 2011 for a YSL Spring/Summer advertising shoot – knew Saint Laurent well and observed how, over time, the country changed him.

“Yves spent significant time in Morocco after his life had slowed down and he stopped partying,” she said. “I knew him in a very different way from many others. He was calm, introspective and personal. He reveled in the simplicity of life here. He used to come to Bled Roknine for lunch. We'd eat in the shade of a tikida tree and chat.”

One warm afternoon at Jardin Majorelle I too sat under a tree, joining a line of men on a bench in the cool shade while the women we were with looked through the boutique opposite. I had previously looked – because I had spent much less time in the Galerie Love – and had seen the prices.

I suspect like most of those men I was fearful about what might ensue with the credit card inside, but my wife emerged impressed but empty-handed. The bookshop nearby with its collection of excellent books on Moroccan culture, Berber art and fashion was just as enticing, and the postcards were cheap.

Here, under muted lighting, are mannequins dressed in the handsome or rustic finery of the Berber people, many dozens of examples of their silver jewelry displayed along with historic photos, film footage from the middle of last century, domestic artifacts, musical instruments and weaponry. 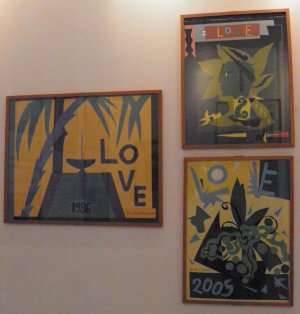 In their clothing you can see hints of what might have impressed Saint Laurent. They possess an exoticism certainly, but once past that impression, in the loose cut, their often asexual nature and the easy flow of the garments you can see suggestions of their strong influence on Saint Laurent's eye.

Then you just add colour.

Since Jacques Majorelle – who died in France in 1962, returning there are after a car accident – opened his garden to the public in 1947, this special place has been a refuge for one of the most important designers of the 20th century whose foundation now manages it, and today is a magnet for plant lovers, the curious and even those just in search of a quiet place in a noisy city.

Some even go for at the poster art of Yves Saint Laurent in the Galerie Love beside the boutique. I suppose. 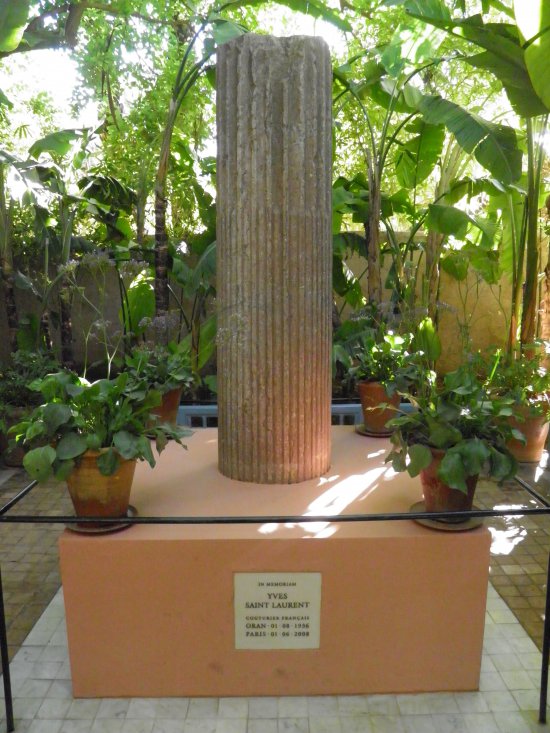 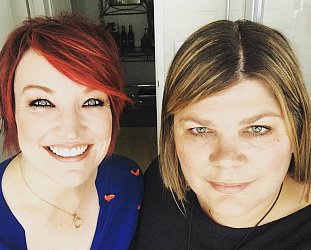