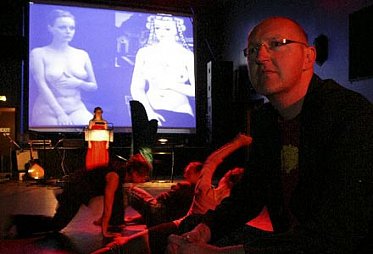 For Auckland composer and music teacher Warwick Blair it has been a long journey to come full circle. In the late Eighties he won a scholarship to the Conservatorium in The Hague but during his studies was drawn to aspects of pop music of the period. He formed the band Glory Box and went to London.

"We had success there and recorded, we were a bit influenced by Dead Can Dance [the group helmed by Lisa Gerrard, who did the Gladiator soundtrack] and This Mortal Coil. It was taking techniques I had learned and trying to transplant them into a pop sensibility," says Blair.

"While there I did some ads and sang in the chorus of Stargate, and was in a band called Mandalay as keyboardist and orchestral arranger. Looking back, I think of it as first-hand research into pop culture, and now I'm trying to integrate that into the classical stuff I'm writing, similar to what I was doing before I went away, actually."

Blair returned to New Zealand in the late Nineties and through film and soundtrack work, got into advertising. He did ad music for Sky Television and the New Zealand Navy, and provided the catwalk sonics for Karen Walker's show in 1998 based on the theme of electricity.

"But increasingly, advertising was unfulfilling. I got sick of the soulless quality of it and had to get back to what I was writing before I went away.

It wasn't about art but was based on commerce."

For the past two years he has lectured in Sound and Popular Music at the university, introducing students to computer technology, electronic music, analysis of soundtracks and writing for film. But he has also returned to writing his own music.

In 2004 he previewed two pieces of a longer work, Accordion, with an ensemble which includes pianist Rae De Lisle, percussionists Frank Gibson and Ron Samson, and keyboardist Stephen Small. It was conducted by John Elmsly.

The work tries to integrate aspects and sensibilities of popular music into the stripped-back forms of art music.

The piece Harp, for example, uses only two chords.

"I've developed a new form called mosaic. It consists of cells which are made visible or invisible, depending on the shape imposed on them, like coming along with a cookie-cutter and whacking it on top.

"That gives the overall shape, but under that are cells which are constantly being repeated, although the cookie-cutter form determines whether we hear them or not. It's something I'm trying to develop."

Blair's five-movement Accordion -- written on computers but transcribed and scored for live muscians -- appeared on the album of the same name in 2005.

What catches you off-guard with Accordion, however, is the quasi-ambient nature of the integrated, five-part work which features an enormous artillery of instruments from guitar, trumpet and harp, to piano, percussion, voices and electronics. Given that firepower it would be reasonable to expect something if not Wagnerian in scope, then at least with the punch of a Phil Spector production.

Yet Blair's engrossingly hypnotic pieces -- each around 10 minutes, which is long enough to pull you in but not outstay its welcome -- are subtle soundscapes which might have come from a documentary about space, deserts or the tides. They recall the ambient explorations of Brian Eno.

With evocative, oceanic swells of electronics or instruments which then drift back to the merest trickle of sounds, this is music cinematic in conception but also so inviting of reflection as to be highly personal.

In places - the final section of Trumpet for example - there is a tonal quality which suggests North African music, in others - the beats which drive the most up-tempo sections, Yes and Your My - hints of vigorous dance floor pop.

The final track is beamed in from another cosmos.

Accordion in places conforms to Eno's description of ambient music being as ignorable as it is enjoyable, but it rewards close attention to the details of melody and sonic texture which bind the whole together.