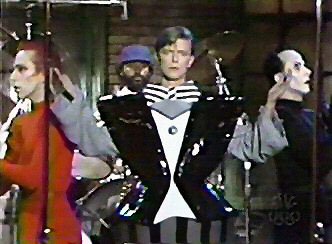 In one corner of the expansive David Bowie Is exhibition which opened in Melbourne a fortnight ago is a video clip that many visitors walk past with barely a glance.

In the exhibition at the Australian Centre for the Moving Image (ACMI) which contains dozens of his stage costumes, artwork and storyboards for videos, handwritten lyrics and other better known videos, this one can so easily be overlooked.

Yet is says so much about Bowie the man and artist.

It is of Bowie with Klaus Nomi and New York performance artist Joey Arias performing The Man Who Sold the World on Saturday Night Live in 1979.

What is odd about it, is this: Bowie performs from within a rigid costume which only allows his arms to move (and even then he can't do much with them) as the hypnotic Nomi in pancake make-up and Arias strike poses.

You might even suggest they were vogueing, a decade before Madonna.

It is the costume however which is central. The tightly-waisted jacket and bow-tie appeared to made of what looks like black and white PVC over a shirt and odd sweater-cum-waistcoat, and below that is tight-fitting maxi-skirt. 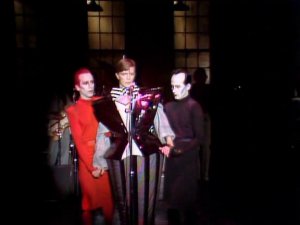 This unusual outfit – and by the late Seventies it was hardly a surprise Bowie would dress in an idiosyncratic manner –has echoes from decades before Bowie's birth.

Designed by Mark Ravitz, the costume is inspired by Sonia Delaunay's designs for the play Le Couer a Gaz (from '23) by the Dada artist/writer Tristan Tzara.

The man who was once the formerly flamboyant and futuristic Ziggy Stardust now sings something for before Ziggy, the opening lyrics which are “We passed upon the stair, we spoke of was and when” all the while appropriating an image from the past.

It is as if time has been bent out of shape like some Moebius Strip or drawing by Escher . . . and Bowie increasingly became the man passing himself time and time again in his career.

The year after this startling performance he sang Ashes to Ashes which referenced Major Tom of Space Oddity a decade previous, a character who would also reappeared in Hallo Spaceboy in 96 .

And that was only the most obvious self-reference.

His most recent album cover for The Next Day was a myth demolishing reference to his famous “Heroes” cover. That is now, and way back then . . .

His first single released under his new persona of David Bowie in January 66 was Can't Help Thinking About Me. It included the lines, “I'm on my own, I've got a long way to go . . .”. 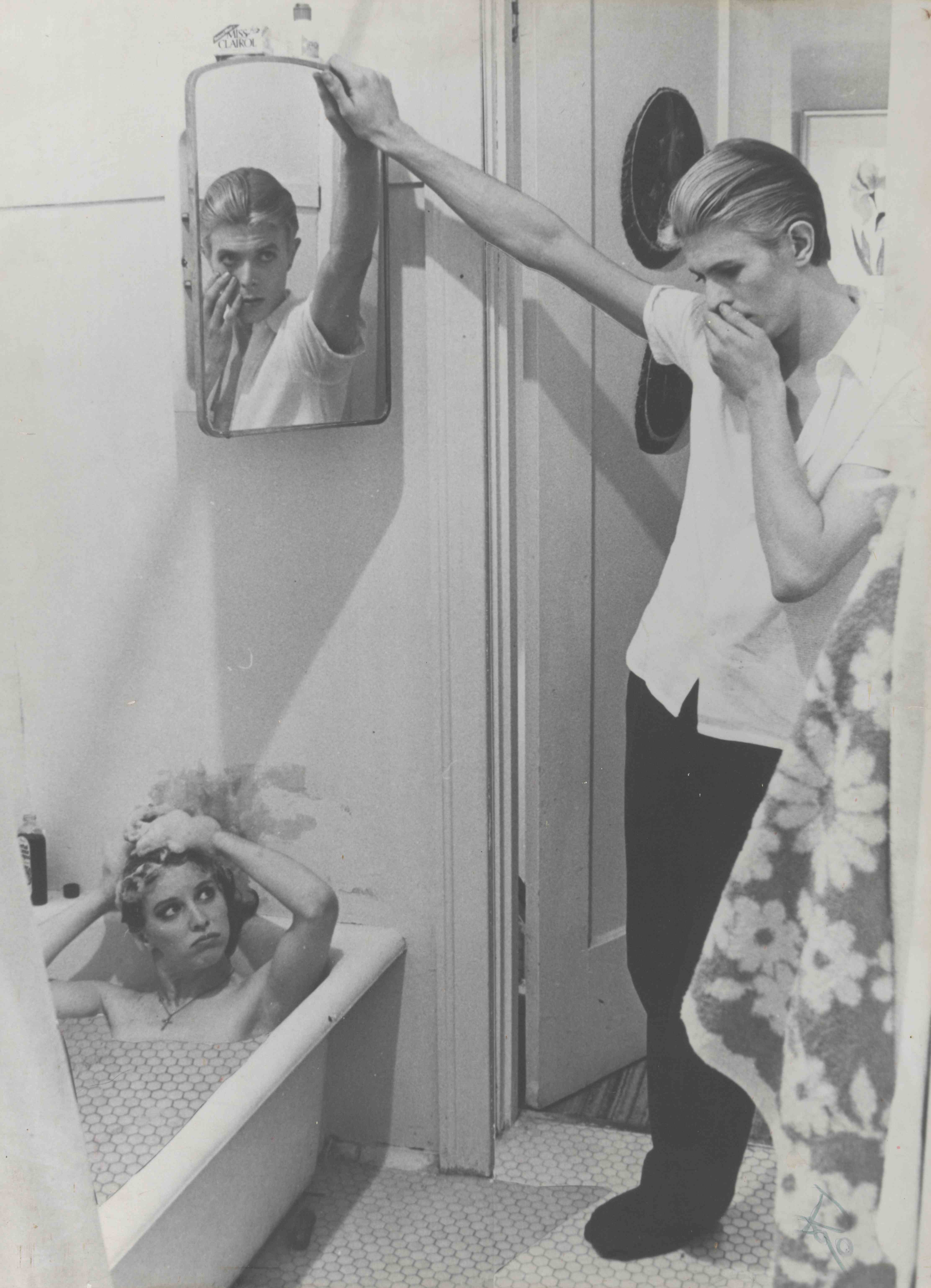 And the man who also sang “never did anything out of the blue” on Ashes to Ashes never did stop thinking about himself . . . and how to reinvent himself, how to retire his characters like Ziggy or the Thin White Duke, and how to explore cultural reference from beyond the world of pop music.

In one of his collages using still from the film The Man Who Fell to Earth, he seems to be looking at and past himself.

Bowie looked to film (posing like Garbo, dressing like Katharine Hepburn), studied mime, in the late Seventies painted bold Expressionist portraits of the japanese writer Yukio Mishima and Iggy Pop (“that helped me get back into music” he said later) and acted in The Elephant Man on stage.

Change and fashion were the constant thread throughout his artistic life and with each new persona or album there might be another new, often startling look. 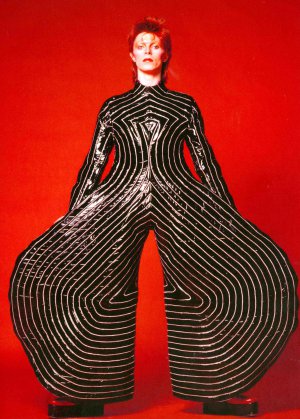 What colour is Bowie's hair? Depends on which Bowie you choose to consider.

Like an image being refracted through a prism he looked different, but was always – somewhere in there – David Bowie, the suburban boy who grew up desperate to be a pop star (seven teenage bands in five years) but briefly abandoned music in the late Sixties when nothing seemed to be working for him.

That period away allowed him to explore other ideas and when he returned he was a very different Bowie, one who reached beyond the constraints of pop and image into a bigger view of the world and its possibilities.

The title of this exhibition is astute: David Bowie Is.

The beguiling, sometimes bewildering and certainly extensive exhibition throws up no simple answer.

Bowie then and now is whatever you want him to be and whatever he was.

The David Bowie who now lives quietly in Manhattan with his wife and daughter remains a tantalising enigma.

However you read it, the exhibition David Bowie Is works with multiple meanings and allows for numerous and diverse interpretations of the artist and his various arts.

David Bowie Is at the Australian Centre for the Moving Image (ACMI) runs until November 1. Bookings are advised. For further information see: www.acmi.net.au

For more on David Bowie at Elsewhere including archival interviews start here.

I saw the exhibition in London in April 2013. I went with two good friends and the three of us were absolutely speechless as we wandered round. It was brilliant, is brilliant. I have decided to go see in in Melbourne. I loved seeing the handwritten song lyrics, the costumes, his stage work, the snippets of movies - that wonderful scene in Merry Christmas Mr Lawrence, where he shaves himself ... Just wonderful! GRAHAM REPLIES: Great scene . . . but I've just tried to watch The Man Who Fell to Earth again and . . . nah!

Was there last week, is an excellent show. Favourite corner contained 3 postcard sized paintings by Bowie used to convey his ideas to the director of the Ashes To Ashes video. Favourite room was the Berlin-flavoured room. Eno's synth! Bowie's paintings of Iggy! Oblique Strategies cards! My advice is to get there for the first (10am) session, skip to the 2nd or 3rd rooms and avoid the crowds. My wife's advice was to remind her tone-deaf husband not to sing along while he had the headphones turned up to almost max volume ... P.S. Excellent little exhibition of Australian Gothic paintings at the Potter gallery at the Melbourne University. GRAHAM REPLIES: It's certainly one to take time over. And for something completely different there is the Catherine The Great exhibition of works from The Hermitage at the NGV International just down the road (Rembrandt, Van Eyck etc)

"Bowie Is" looks and reads to be fantastic from this write up, graham. It is really worth spending 9 minutes watching the Saturday night live clip mentioned at the start of your piece. It is perhaps one of the most wonderfully bizarre and brilliant things I have seen for a long time- a great reminder that Bowie, (and friends) at his best, was truly challenging a whole lot of gender / sexuality "norms", and was also freaking hilarious at times too. There is quite a bit written about this performance around the Internet, much of it worth a read. All three tracks- each differently and wonderfully costumed and theatrical- is online at: http://www.disclose.tv/action/viewvideo/113732/BOWIE__RARE_LIVE_VIDEO__MAN_WHO_SOLD_THE_WORLD__2__SAT_NIGHT_LIVE_1979/ Watch- it truly is time well spent. GRAHAM REPLIES: Thanks for that, coming soon we have a piece by someone who was there for the rehearsals.