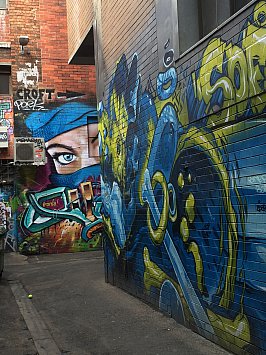 When Chris Hancock talks about his friends, mentors and inspirations, it sounds like some weird code. In short order he ticks off Dem189, Nost, Ha-Ha, Adnate, ELK, Rone and Steen Jones . . . who apparently ripped off Sailor Jerry.

And so it goes as Hancock guides me around the graffiti-covered lanes of Melbourne where he — as a graffiti artist himself and something of a historian of the genre — finds inspiration, genius in low places or high art sprayed large and covering the whole side of a building.

For those only used to tags along railway corridors or beautifully realised commissioned murals, the genre of street art encompasses many styles and approaches — paste-ups, throw-ups, stencils, pieces and so on — which Hancock describes and can also point out examples of in the city's famously colourful lanes. 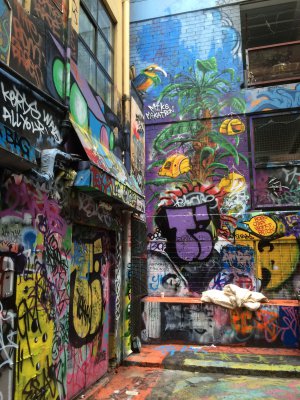 We begin in Hosier Lane opposite Federation Square where dozens of young Asian tourists are taking selfies against the vibrant backdrop, but the real history of Melbourne's street art styles began in the dog-leg of Rutledge which runs off Hosier.

Here, away from passers-by, was where taggers, bombers, scribblers and artists first tried their hand, and still do.

The layer-upon-layer of paint laid down — more correctly sprayed down — over two decades is now 4 mm thick in many places, a shell of paint wrapped around the old brick buildings.

Up high Mike Makatron has sprayed a beautiful tropical scene and down low taggers have made their often indecipherable mischief.

But stay awhile and suspend judgement because even in these rapid scrawls there is an artist's hand at work, and many of them move on to more elevated styles and designs once they master their craft and marshal their ideas beyond the squirt of a stylised signature. 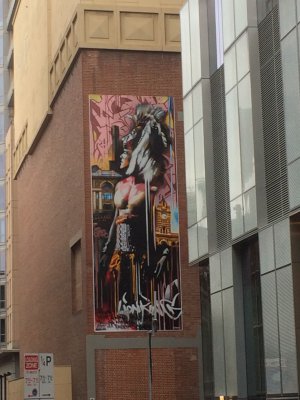 At the far end is a massive tree design, perhaps 10 m tall, by Dem189 from France who brought in a scissor-lift for the purpose, and just around the corner is an even larger face of an Aboriginal boy done by Melbourne's own Adnate.

Taggers can't get to these, nor to the huge Aztec-cum-African warrior figure — with Melbourne's Flinders Street Station behind him — towering over a nearby street.

There's an irony in this one though. It is by DVate (sometimes DV8) and was a commissioned work. The money behind it? Disney who wanted to draw attention to The Lion King.

So as the old saying goes: money follows intellect . . . and Hancock doesn't much rate Rone's soft-focus face of a model painted large on a curved wall near a Stamford hotel.

Just too calculated and the imagery is somewhat vacuous and designed not to upset or disrupt. 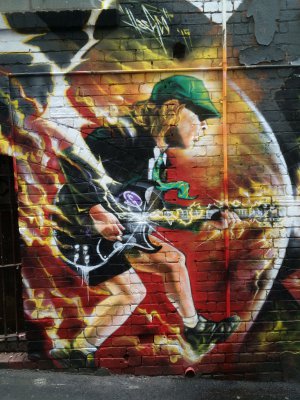 The more meaty stuff like the work by Heesco and Makatron (and it must be said Hancock himself) in AC/DC Lane.

This is where the band's Angus Young by expat Mongolian artist Heesco parades larger than life with a burning guitar.

This is the real street art.

Down this lane which leads to Cherry Bar are politically pointed works in stencil and pieces by Sydney-based Luke Cornish – known as E.L.K – whose stencil portrait of Melbourne's controversial Father Bob Maguire was among the finalists for the 2012 Archibald Prize.

Just around another corner is a genuine Banksy of a parachuting rat.

Amidst the many hues and haphazard overlapping of images and tags in many of these lanes, but placed discreetly, are works by Will Coles who makes objects in builders' cement which are firmly affixed. 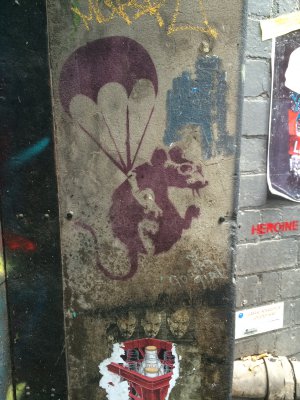 Some like an abandoned builder's glove with “MAN-MADE” inscribed, or the expensive looking purse with “FAKE” on it look so real you want to pick them up . . . or, in the case of the dead pigeon, maybe not.

There's a lot of street politics here too says Hancock: Like why some artists' works have not been tagged and others are targets, of people from out of state coming on “spraycations”, should you take the corporate dollar . . .

We leave this area and walk across town through streets which look exceeding bare and dull after the visual kaleidoscope we have enjoyed, but when we turn into a tiny lane off Franklin Street near the Queen Victoria Market it all begins again. Because down here is The Blender Studios, workspaces in a former warehouse for artists of all persuasions. 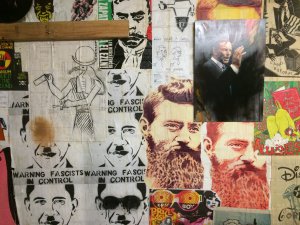 Founded by artist Adrian Doyle in 2000, the studio is where their Street Art Tour ends, and it is a destination in itself with designers, painters, sculptors and graffiti artists working in a collective environment.

Doyle says Blender Studios became the intellectual heart of the early street art scene in the city and has been the jumping off point for artists, exhibitions, commercial work and much more.

It has its own rules, among them if you bring anyone to your studio space you have to show the guest all the other spaces to emphasise the collective community spirit at work. 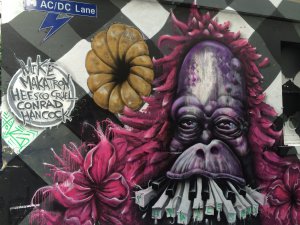 The Blender Laneway outside is like a history of the city's street art with famous locals and internationals leaving their mark or a work.

It's a long list and the art is an impressive blaze of design, colour, thought and creativity.

For information on The Blender Studios see: www.theblenderstudios.com 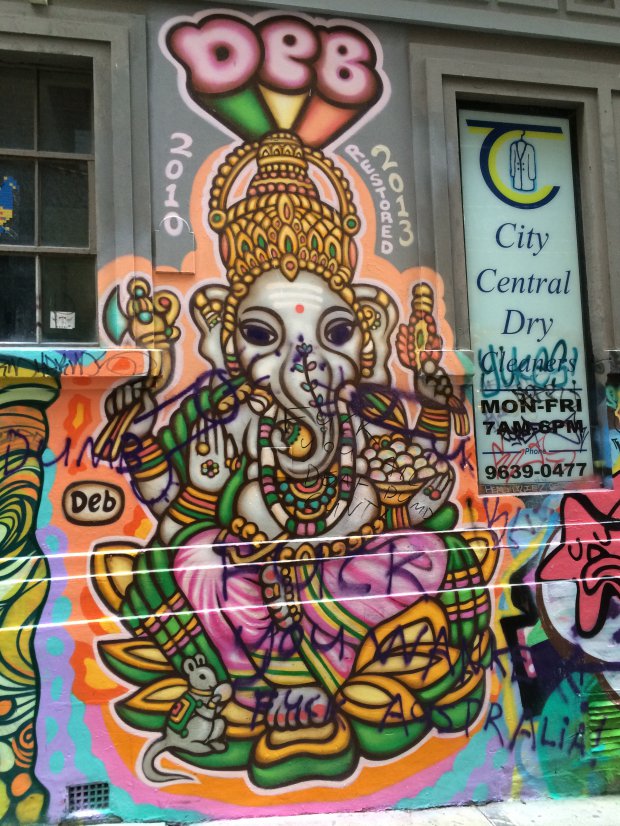 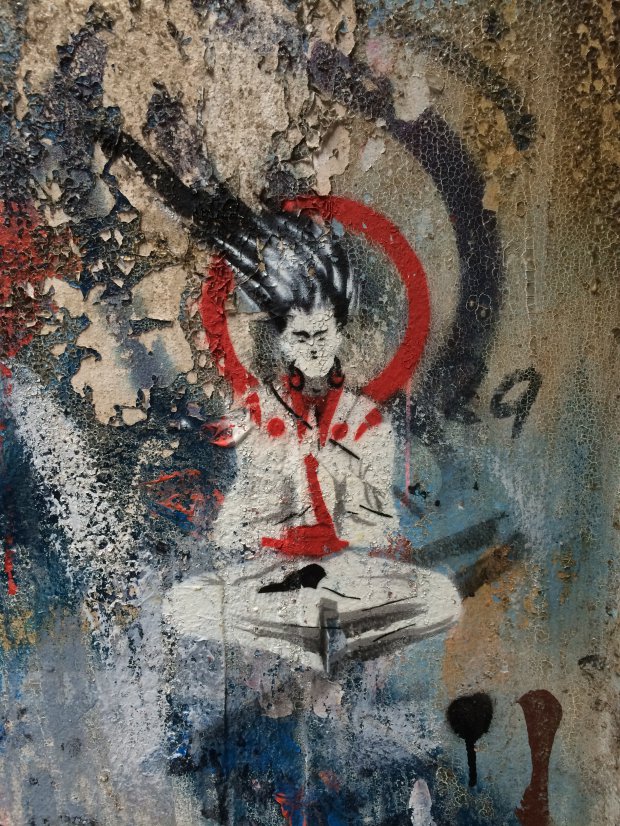