In her new work for solo piano – a zigzagged gaze, 10 piano pieces -- the New Zealand composer Eve de Castro-Robinson was “let loose among the art collection of the Wallace Trust” which she describes as “a gleeful trawling through riches” in the liner notes to the new Rattle release by pianist Henry Wong Doe.

On that album Pictures, Wong Doe interprets Mussorgsky's Pictures at an Exhibition but also these new compositions by de Castro-Robinson which were inspired by works from Philip Trusttum, Vincent Ward, Jacqueline Fahey, Judy Millar, John Ward Knox and others.

Her pieces are economic and refined (the longest Return just 4.40 and inspired by Ward's dark vision, half a dozen fewer than two minutes) so it is fitting that in the CD sleeve – created with typical attention to detail by Rattle's designer UnkleFranc – she offers her own haiku alongside a brief explanation of each piece and the image of the inspirational work. 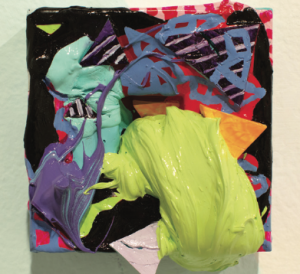 Of Miranda Parkes' playfully colourful abstract Trick-or-Treater (2014) for example, de Castro-Robinson writes she was drawn to “Parkes' deliciously wilful concoction of quasi-edible paint [which] ooze and squeeze their way out of their confines in an exhilarating liberation”.

Her appropriate haiku for this work reads:

lick me all over For Ward's much more oppressively claustrophobic Return of 2012 she writes:

you are dark devil creature

When these works were recently performed in Auckland by Wong Doe, the New Zealand Herald reviewer William Dart noted, “Eve de Castro-Robinson has always enjoyed the vibrant potential of colour, from the very titles of specific scores to the almost painterly textures of her music”.

With a zigzagged gaze on the album Pictures her alertness to the visual has found its natural home in her new music.

For further information on this and other Rattle releases check their website here.