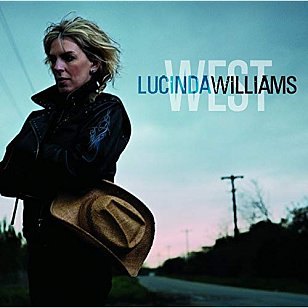 Although saturated in the sadness which had affected her in the years before this album's recording -- the break-up of a relationship, the death of her mother -- it would be unwise to presume that everything on West had turned on those events: Williams is too smart and too poetic a writer to be quite that literal.

That said, she concedes the opener Are You Alright? was directed to her brother who cut himself off emotionally from the family after his mother’s death; and Learning How to Live and Unsuffer Me might seem to be prompted directly by the tenor of her times.

Inevitably Williams here sounds more emotionally bruised and world-weary than ever -- and a sensual languor to the point of ennui has often been her style -- so newcomers might find West, with a couple of exceptions, a bit too melancholy if not downright glum for their taste.

But it is so heartfelt, and so right there on the surface -- and yet penetratingly deep -- that you cannot help but be moved by it. Songs like Rescue (“he can’t rescue you, can’t pull the demons from your head”) are confessionals but also have a universal quality.

Those that break the pace of simple and direct lyrics delivered from that place we retreat into when the pain is too much are the acerbic Come On which rocks with anger at a former lover (with whom we might sympathise after the treatment he gets here), and the nine minute swirling Beat-like poem Wrap My Head Around That which crackles with saucy, adult indignation and lyrical twists.

Set in simple music beds by producer Hal Willner who has wisely left the naked emotion in the foreground, the other players here (guitarist Bill Frisell, Jayhawk Gary Louris and Doug Pettibone among them) are kept in check and the result is a sonic parallel to that weary state.

Despite the clouds hanging over this, West is also a surprisingly powerful -- and empowered -- album and the title track at the end blows through an air of optimism and a glimpse of the possibilities of happiness.

Most telling is Words, the track in which she says that words will remain her loyal companion despite the setbacks -- and for those who admire this singer-songwriter that is good news indeed.

Not the easiest album Williams has made, but certainly alongside her very best in an impressive body of work . . . and longtime Williams' loyalists will find much here to confirm their belief that she is one of the great singer-songwriters of the past two decades.

There is much more about Lucinda Williams at Elsewhere including interviews and album reviews starting here.

You can hear West at Spotify here. It would be a brave or foolish person who tried to give a snapshot of the career of this guitarist in just a few short sentences: so here goes a fool. Frisell came out of the Midwest (so there's... > Read more