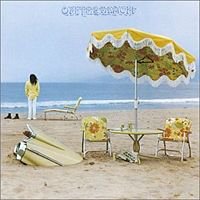 By consensus the idealism of the 60s was dealt two fatal blows in late '69: the first in August when the victims of Charles Manson's murderous family started turning up in flash Hollywood homes; then at the Rolling Stones' free concert at Altamont in December when Hells Angels took control of the crowd by means of billiard cues and blades.

In a world of peace, flowers and waterbeds the bad guys didn't care - they just went about their filthy business as usual.

Then the war in Vietnam escalated, there were riots, and America was a society riven from within. A new and more cynical era was emerging which would rattle the cage of Amerika.

As Plato said, "When the mode of the music changes the walls of the city shake." Jefferson Airplane went from "feed your head" to "up against the wall motherfucker" in just three years.

By the early 70s a lot of music was soaked in anger and disillusionment. Much like his countrymen in the Band, Neil Young from Canada had a mainline into American folk with an outsider's view of the "Great Society" which President Lyndon Johnson had envisioned in a more optimistic '64.

Young's late-60s songs had their dark corners but mostly favoured plaintive folk (and folk-rock with Buffalo Springfield), but as the decade turned Young was plugged in with ramshackle band Crazy Horse and making much more disturbing sounds.

Those threads have run parallel ever since, despite his digressions into country, big band and rockabilly in the 80s, and a court case when his frustrated record label, Geffen, tried to sue for making "unrepresentative" music.

The man who briefly became "the godfather of grunge" for his noisy Live Rust ('79) and Weld ('91) celebrated his 50th year by recording with Pearl Jam on the oceanic, guitar-driven Mirror Ball in '95.

Young's career has defied simplistic characterisation - his Greendale album of 2003 was a song cycle about a fictional family - and damn difficult to follow sometimes.

The unavailability of some interesting albums has been annoying, the most notable being On the Beach of '74, a nihilistic and ragged album where he directly addressed the cynical, dark times.

On the thrilling and evil Revolution Blues he adopted the persona of madman Manson (whom he had met briefly) and offered some couplets which nailed down the coffin lid on 60s idealism: "I see bloody fountains and 10 million dune buggies coming down the mountain, I hear that Laurel Canyon is full of famous stars . . . but I hate them worse than lepers and I kill them in their cars."

Young sounds as if he means every word, which must have troubled his pals in the Canyon such as Joni Mitchell.

On the Beach was out of print since its release but was one of four albums issued on CD for the first time in 2003, but you didn’t come to it for the digital remastering. It remained a raw, sometimes poorly recorded affair - which only adds to its grim allure.

Released instead of Tonight's the Night (an album saturated in the deaths of two friends from heroin) it was hardly the chipper alternative: Young sings in that quavering, stretched and sometimes cracking voice of America's greed for oil (the still topical Vampire Blues), his ambivalence and disillusion with being famous (the title track), and his soon-to-be ex-wife actress Carrie Snodgrass (the unnerving Motion Pictures). The brief Walk On and See the Sky About Rain are the most user-friendly - and the skeletal and sometimes working-draft instrumentation (the Band's rhythm section and David Crosby on Revolution Blues) make for an even more unsettling ennui. It is a slightly scary, vinegar-tasting album even now.

"Back in the old folkie days the air was magic when we played," he sings on the nine-minute Ambulance Blues. It leads to "you're all just pissing in the wind, you don't know but you are", which aptly encapsulated his mood.

Thirty years later On the Beach remains a high point in his career and a minor classic.

Unfortunately the same can't be said of the others in the CD reissue which put On the Beach into context and also revealed the erratic nature of his output.

American Stars'n'Bars ('77) could boast the sterling, rock monument Like A Hurricane with its stuttering guitar work but the rest is mostly Nashville-styled country rock. It's not unpleasant - Hold Back the Tears is bitter-sweet and Will to Love is a subtle beauty although the premise of a salmon swimming upstream being a metaphor for the dangers of love might be hard to grasp. But the titles alone of The Old Country Waltz, Saddle up the Palomino and Homegrown speak volumes about their ordinariness.

While Hawks and Doves ('80) opens with the lovely Little Wing and the eerie Old Homestead (which recalls some of his best folk-country songs) it's largely downhill from there in a collection of journeyman country and folk tunes. And Re-ac-tor ('81) is a mishmash of mule-headed rockist throwaways you feel insulted by.

Tellingly, the much misunderstood electro-rock of Trans the following year was his last for Warners. Together these two albums should have been a warning to Geffen. If Warners had sued after Re-ac-tor (careless disregard for art, possibly?) you might have been on their side.

But as the dyspeptic, unnerving brilliance of On the Beach proved, Young's particular genius can invite you into an emotional shadowland and sometimes - as in this case, when the mode of his music changed - capture the raw tenor of the times.

For other articles on Neil Young at Elsewhere go here.

Graham, I reckon you should work out how to get these sorts of posts caught in the hype machine's net, particularly those that you are able to stream music. I think many others will appreciate your thoughts.

One of the classic "sad bastard" albums though I imagine it was very cathartic for Neil after the trauma he'd been through. I usually reach for the title track when I'm feeling sorry for myself and I enjoy the meancing "Revolution Blues". 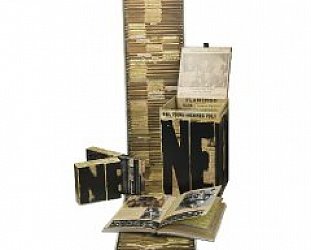 There is a difference between something being “much anticipated” and it being “long awaited”. Neil Young’s box set Archives Vol 1 (1962-73) is certainly much... > Read more