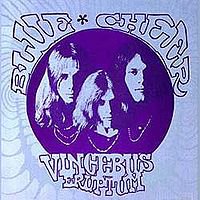 For many decades I kept a clipping about Blue Cheer and this particular album inside the record cover, and of course when I went to look for it recently it was gone.

But the gist of it was this: Blue Cheer were the loudest band in the whole history of ever, according to the writer, and when they recorded this monster in a North Hollywood studio they blew out all the speakers or the desk (the only other time had been by a full symphony orchestra) . . . and they were managed by a Hell’s Angel named Gut.

They played biker gigs around San Francisco and most of their songs revolve around drugs you inject. The thunderous, nine minute Doctor Please here -- written by bassist/singer Dick Peterson -- includes the lines “I need your pain killer doctor, shot inside of me”. And Peterson sounds like he’s really desperate.

The impenetrable liner note poem may come from the acid guru/manufacturer Owsley Stanley (here as Augustus Stanley Owsley III) and they may have taken their name from his LSD, but this is a very bad trip.

With the guitars of Leigh Stephens taking as their starting point some Hendrix-styled feedback turned up to ear-damaging volume and Paul Whaley thrashing the bejeezus out of his kit, this was a power trio like no other.

There are points on this impressive debut that are more closely aligned to Sonic Youth’s pure noise of more than two decades later or Neil Young’s feedback’n’grind disc Arc on the Arc/Weld collection.

And when they took on riff-heavy covers (BB King’s Rock Me Baby, Mose Allison’s Parchment Farm and Eddie Cochran’s Summertime Blues are all here . . . in very different forms) they stripped them back to raw elements and shivering, angry guitar work.

This wasn’t music for the faint-hearted or folkies -- the album title according to that lost article allegedly means “run for the hills” in Pig Latin which Romans would shout when an earthquake came, or something like that. (Of course this isn’t true at all, but it’s a good story.)

These days many make the case for Vincebus Eruptum anticipating grunge -- it was a favourite album with many Seattle bands, and many cite it as an influence -- but mostly it took aspects of Steppenwolf and Hendrix one step further (and louder) and cleared the ground for bands like Grand Funk Railroad and heavy metal of the Eighties.

Curiously for a record which seemed destined, if not determined, to alienate at the time of peace, love and flowers, it actually did well on the US charts (almost sneaking in to the top 10) when it was released in January 1968.

Blue Cheer enjoyed a remarkably long career for a band which seemed destined to burn out with all the bright brevity of a magnesium flare. They lasted, with different line-ups and some time out, until the early Nineties.

Then they came back in yet another form and are still around, although there is litigation over the use of the band name. But really there was only one Blue Cheer and that was the early version with guitarist Stephens who only lasted two albums.

Although some acclaim their follow-up Outsideinside as superior (they are wrong), Vincebus Eruptum is the band’s defining moment, largely because it sounds so enormous, angry, wilful and wildly distorted.

It is the elevation of primitive musicianship into an art form, emphasises feel over form (very punk in that regard), and makes the argument for excess being the best kind of success.

Vincebus Eruptum is a damaged and damaging album that is frequently so lacking in any kind of finesse, depth and subtlety that many would reject it out of hand. They may well be right.

But that doesn’t change the fact that this is an album of such extreme, groundbreaking noise that it exists on its own terms.

Run for the hills.

Thanks for this! Blue Cheer & Summertime Blues, one of my faves.

I had this on vinyl way back then and loved the white noise it gave out. I went to JB Hi Fi today to pick up the Dr John 5 pack you recently recommended (they did not have any at Westgate), so when browsing came across this CD which I remembered you reviewed a couple of years ago. As soon as I pour myself a glass of wine it is going on the stereo to terrorise the neighbours. And as Steve Marriot said about the neighbours

I grew up in San Francisco in the 60's. I went to the Fillmore Auditorium when I was 12. When I first saw Blue Cheer I hated them.They were a 6 piece band that played EVERYWHERE. When I went to Winterland October 13th or 14th '68 to see the Jefferson Airplane and the Charlatans (I still have the poster) Blue Cheer was once again on the bill. During their set I went up to the highest seats away from the stage to smoke some hash. But this time I heard something different.There was a "ROAR" coming from the stage unlike anything I heard before.(Or since) Could this be that band that I saw everywhere I went?! I tried to make it down to the main floor but decided to stay in my seat. The band had gone from a "run of the mill" band to an acid powered trio. The next time I saw Blue Cheer they were headlining a ballroom called the Western Front .Ah,but this was the 60's and before I went to hear them, a trip to Haight Street to cop some acid! I scored a pink wedge, the prefect companion for this band. That night my life was changed forever! These guys played like something from another planet. Never had I seen or heard anything like them. Not only could you "feel" their music in your soul, but they smashed your molecules! I became a diehard fan from then on.
I told my friends and bandmates about my experience but was largely put down for having no taste.You either loved them or hated them.(Most people hated them without having seen them play)
Also the San Francisco groups hated playing with them because they stole their groupies. While most bands were playing peace and love songs,Blue Cheer played an unaplogizing heavy drug/sex message. They were the only band that had a "rock star" image. They were totally one of a kind. Their audience had more chicks than guys and that's saying a lot.
I remember standing near the front and this great looking girl whispered in my ear, "this isn't music,this is SEX!" I'd have to agree.