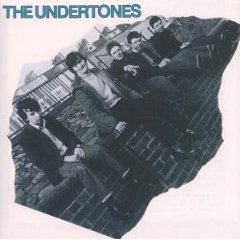 It's a measure of how obsessed rock music is with the present tense that in 1979 Paul Morley in the NME would proclaim, "The Undertones have created the greatest pop of this age and thus every age".

That use of "thus" there says so much about the pressing immediacy of the punk era in Britain. New and urgent was what mattered.

The Undertones out of Derry, Northern Ireland were certainly possessed by that sense of The Now: their singles were recorded in quick-smart time (Get Over You in two days in December 1978 when they were studio novices) and their songs hardly stretched the concentration.

Only seven of the 14 tracks on this, their debut, broke the two minute mark.

This was short, sharp, dense and very snappy pop with classic hooks and a nod to the Ramones' disciplined guitar attack. They didn't shy away from a stabbing and brief guitar solo either. It was as if they were searching for the perfect pop song, and the late John Peel insisted they had discovered it with Teenage Kicks which was one of his favourite songs.

He played it incessantly on his radio show which lead to interest in the band from Sire Records and consequently the Undertones' self-titled debut. 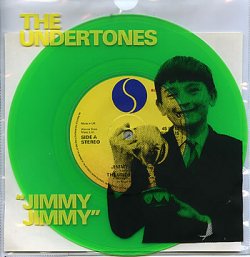 The Undertones were quite unlike most bands of their era: singer Feargal Sharkey had a quivering and romantic voice (it had won him competitions as a kid, he's pictured as a grinning boy holding a trophy on the sleeve of the Jimmy Jimmy single) and the band was high on humour and somewhat low on ambition.

They didn't relocate to London when fame hit and weren't much taken by the touring life in the early days: "All we really wanted to do was make records," songwriter/guitarist John O'Neill told Melody Maker in early '79 just before their debut came out. "I mean, we never thought anything would happen anyway. If I hadda had the hindsight I have now I wouldn't have signed with Sire.

"Why? 'Cos it means being away from home an' all. We coulda had records out on Good Vibrations [a local label] and that would have done."

At the same time Sharkey said, "If it came down to it and we had to move to England, London would be the last place we'd go to. London's just totally crazy, as far as we can make out. They're all just 'Bleep, bleep, bleep.' Look after number one. They don't care about anyone."

They were also under pressure to write about the Troubles ("We thought, 'no way', that would be cashing in on the Troubles," said O'Neill) and so at the height phlegm-flicking punk their album came like a breath of breezy, if energetic, pop.

The album contains flat-tack classic verse-chorus pop (Family Entertainment, Jimmy Jimmy, Here Comes the Summer), splashes of teen-angst humour (Girls Don't Like It) and local references (the Freeman's catalogue mentioned in Male Model is the one from which bassist/keyboard player Michael Bradley bought a leather jacket and O'Neill got a black Les Paul copy guitar).

The final 57 second track Casbah Rock was a snippet of a rehearsal tape from '77 which acknowledged the club where they played.

The 30th anniversary edition of the album however added breadth and texture to what is a minor classic: it includes the singles Teenage Kicks, Get Over You and You've Got My Number (as well their lightning fast b-sides) from the same period, four songs from a John Peel session and the video for Teenage Kicks.

It's a measure of the innocence of the band (all under 21 when the album came out) that they had no clue of the power of Teenage Kicks which appears in most rock lists of great "British" singles.

"Feargal Sharkey's undisguised Ulster accent made it a defiantly British anthem, one that would later withstand attempts to hijack it by the likes of Green Day and Blink 182," said Q magazine in March 2008 when it included in the list of 110 classic British records. It has also been covered by KT Tunstall, the Raconteurs and a hundred post-punk garagebands.

"When we put out the Teenage Kicks EP in 1978 we didn't think Teenage Kicks was the best song," O'Neill told Q when it was included as one of the 1001 best songs ever. "True Confessions was the one we thought people would go for, we only named the EP after it because we were teenagers and it seemed appropriate."

"It was John Peel who convinced me of the song's quality," said bassist Bradley. "He was on Desert Island discs in '91 and that was the one record he said he'd take to the island."

The Undertones went on to make more lyrically and musically ambitious albums (notably Positive Touch in '81 which alienated as many fans as it seduced) and after The Sin of Pride album in '83 -- which divided fans, critics and eventually the band -- they broke up.

Sharkey pursued a moderately successful solo career and scored a massive hit in '85 with his cover of Maria McKee's A Good Heart.

The O'Neill brothers, John and Damian, went on to form That Petrol Emotion and their first singles Keen and V2 snared Peel once more. Their debut album Manic Pop Thrill of '86 was a rough-edged and brittle extension of The Undertones but with political overtones.

However that's another story: the 30th anniversary edition of The Undertones debut (a whopping 31 tracks plus the video on a single disc) is where the story began and their fresh, exciting innocence is heard at its best.

Teenage Kicks still raises the hair on the back of my neck thirty years on. You've Got My Number(Why Don't you Use It) does likewise. Originally a stand alone single it's great to see it included here. Its flipside, Let's Talk About Girls, is a cover of an American garage rock track from The Grodes, although John O'Neill may have heard The Chocolate Watch Band's version. The O'Neill brothers were massive garage rock fans.