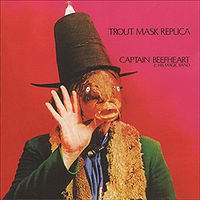 When I first heard Trout Mask Replica some time in early '70 I fled. It was all very well being told that Captain Beefheart (Don Van Vliet) sounded like Howlin' Wolf, but that would be like describing happy, mop-top Beatlemania to someone then playing them I Am The Walrus. Or showing them lots of pictures of eyed-shadowed Ziggy Stardust and getting all excited about glam-rock -- then playing Warszawa off Low by way of example.

The description didn't match the content when it came to Trout Mask Replica either. Yes, I could hear Howlin' Wolf's stentorian bark in Beefheart's vocals but this was surrounded by stuttering, often atonal music scattered throughout with free jazz saxophones squirreling around, snatches of spoken bits, brittle guitars  . . .

Just bloody difficult. No wonder I retreat to Creedence singles, or John Lennon's primal therapy album which seemed easy listening after Trout Mask Replica. The Simpson's creator Matt Groening had a similar response, his first reaction to it was that it was "the worst thing I'd ever heard", but now lists it as one of his favorite albums.

Of course you should give these things time and within a few years I had come back for more -- and more. Right now I am looking at half a dozen battered and much played Beefheart albums in their now tatty covers, among them Trout Mask Replica which is held toigether by cellotape.

Listened to today -- post Pere Ubu, punk, James Blood Ulmer, Tom Waits' clank'n'grind, mad alt.blues and indie rock -- you can quickly locate the songs lurking in Trout Mask Replica. I do wonder if I had heard Moonlight on Vermont a couple of times rather than just starting at the top of side one if I wouldn't have got Beefheart straight away. It sounds almost "normal".

Context is everything however and in '69 when this album came out most people wouldn't have been ready for it either. Beefheart had signalled his intentions with two previous albums (the terrific Safe As Milk in '67 and the disappointing Strictly Personal the following year) but Trout Mask Replica was to be his major statement: it was a double album and that meant it was to be taken very seriously.

As with fellow traveller Frank Zappa (who produced these sessions), Van Vliet had his own particular vision and in his garageband years of the early Sixties had hauled tough urban blues into the mix. By the time he formed his own band and got to Trout Mask Replica his reference points were Howlin' Wolf, Chicago blues and atonal avant-garde classical music, and these -- along with a domineering personality and ruthless discipline for band members, like Zappa which perhaps accounts for their head-butting relationship -- lead to Trout Mask Replica which was conceived and rehearsed in isolation over nine months in a big house in LA's Ensenada Drive.

Drummer John French speaks of how Van Vliet was a master manipulator, kept the band emotionally (and to some extend physically) captive, and consequently broke down their preconceptions of traditional musical structure.

The result is four sides of vinyl, 28 tracks, of polyrhythmic drumming, staggering saxophone parts which refer to John Coltrane, Ornette Coleman, Rahsaan Roland Kirk, dense blues-based guitar figures which have an abstract (Fred Frith-like) quality, and Van Vliet's growling vocals in which his lyrics refer to arcane and highly personal matters and seem to be channeled in from another dimension.

There is perhaps some reference point for this album in some of Zappa's work at the time, and maybe even a more fractured version of what Dr John was up to with albums like Gris-Gris of the same period. But mostly it can only be understood in the context of Van Vliet's career.

This was the album that came to define his particular and sometimes peculiar vision of music, and the one which all his other albums are somewhat unfairly compared with.

Even as late as 1980 when he released Doc at the Radar Station critics were saying it was return to the form of Trout Mask Replica. It has always seemed critics wanted to hear that album in new forms over and over, but this really was a one-off, a rare marriage of raw blues and Stravinsky, free jazz and the sound of a rusty nail scraping over a piece of rock.

Trout Mask Replica is not for the faint-hearted even today (start with Moonlight On Vermont perhaps?) but it is an album that showed what was possible when a singular vision was allowed to flourish unfettered in an era when -- for a brief moment before The Music Business caught up -- an artist could realise their inner voices and be uniquely creative.

Not that the band were entirely sure of what Van Vliet was up to, he browbeat them into submission they say. But for a purpose. There's a line in Trout Mask Replica, "you couldn't have done this if you knew what you were doing" -- and that just about sums it up.

Some say this album had an impact on grunge and guitarist Gary Lucas, a later Magic Band member, says "Don invented punk". But that is nonsense.

He influenced post-punk for sure: Magazine recorded a Beefheart song, John Lydon referred to Beefheart as an inspiration for Public Image Ltd and David Thomas of Pere Ubu says that while he thought the Velvet Underground had some interesting music the rest was baloney. "I tended to be into the Zappa, Beefheart, MC5 sort of thing."

"Once you've heard Beefheart," said Tom Waits, "it's hard to wash him out of your clothes. It stains, like coffee or blood."

However you come to Trout Mask Replica -- working back from Pere Ubu and Waits, or forward from Howlin' Wolf or Screamin' Jay Hawkins or Chicago blues, sideways from Zappa and early Dr John, or just chronologically through Beefheart's career -- it is an album to be discovered. And one of those which reveals more every time you play it.

A rare non-rock album from a rare moment in rock culture. Vangelis had a pointed comment about the vacuous New Age music which emerged in the late Seventies and reached epidemic proportions in the Eighties. He said it “gave the opportunity for... > Read more