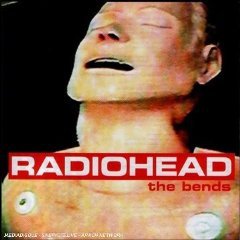 There is an easy and convincing case to be made for Radiohead's more obvious OK Computer of '97 -- or the even more edgy Kid A of 2000 -- as an Essential Elsewhere album.

But The Bends was their turning point. This was the album which took them from the pop culture hit Creep (which appeared in the teen comedy Clueless where the main character's favourite music was by "the complaint rock" bands like Radiohead) and allowed this group from Oxford to be considered Real Contenders.

In retrospect The Bends is an easy album in Radiohead's long and complex career: it is chock full of coherent and interesting songs, driven by some dark internal energy, effectively produced by John Leckie (who had done the Stone Roses, Ride and Elastica by this time) and walks the line between the bedroom angst they were known for after their debut Pablo Honey (1993) and intimations of U2 grandeur without the pomp that was the blight of that band in the Eighties until Achtung Baby ('91).

Certainly OK Computer is a harder album to assimilate, but on The Bends they left behind accusations of Nirvana-lite and didn't fall for the simplistic tropes of Britpop which attended Oasis and its camp followers.

Until The Bends most people would have been reserving Radiohead a place in the book One Hit Wonders of The Nineties on the basis of the US college success of Creep (which had been largely derided by the British rock press and the band dismissed as self-loathing-by-numbers).

But their debut album Pablo Honey proved they had depth, and that opinion was confirmed by the much more mature The Bends.

When Q magazine did its countback on the 100 Greatest Albums Ever in February '06, OK Computer inevitably took the top spot -- but The Bends came in at an astonishing number two, relegating Nirvana's Nevermind, the Beatles' Revolver and Oasis' Definitely Maybe into place positions.

The Bends had rapidly grown in critical stature -- just three years previous it had been in at number four in a Q list behind Nevermind, OK Computer and Revolver. At that time the magazine noted "with hindsight, it's more than an album of transition. [Thom] Yorke's lyrics are self-obsessed yet never self-pitying, but musically -- try just for size -- the band had lost all sense of market-courting restraint. The result is their most coherent set of songs, the first suggestion that Radiohead would be consistently great."

The album was born of difficult times: Creep had been both a breakthrough and an albatross, they'd spent a year being "jukeboxes" complained guitarist Johnny Green of their relentless touring, they needed to be the musicians they intended and to put that past behind them. (The complaint band were now complaining about success?)

And when they finally went into the studio again producer Leckie got sick of them fannying about with small ideas and kicked Yorke out. He told him to go home and write something worth recording. That seemed to do the trick and when they returned to the various studios -- among them Abbey Road -- Yorke (right) had written an impressively diverse array of songs which allowed for interesting arrangements, including piano and strings, alongside Greenwood's shattering shards of guitar.

They were also producing singles -- four were lifted in the UK -- which stood apart from the Britpop movement and had an anguished, passionate and compelling quality, largely because of Yorke's deliberately ill-defined discontent in his oblique lyrics.

The Bends is cerebral -- an aspect they explored in more depth in subsequent years -- but kept its feet firmly planted in song structure: six of the 12 songs appeared on their 29 track Best of Radiohead package in 2008.

When The Bends appeared the grunge movement they had been briefly accused of tailgating was dead, Britpop was broadcasting on an ever decreasing frequency, and U2 had moved on to very different things. The stadium stages were being cleared and someone could come through the middle.

The Bends -- and specifically songs such as High And Dry, Fake Plastic Trees and My Iron Lung -- was the album that took Radiohead to a higher ground and on the back of it they could have easily lifted the mantle from U2. But they didn't.

In '97 when they got the call from Bono to support them -- although they hardly needed the leg up -- they did it, but declined the easy route to fame (death and success by repetition).

They went off and almost wilfully made OK Computer, an album that was soaked in morose introversion and invited comparisons with Pink Floyd for its ambition, cerebral scope and elegant ennui. But that's another story.

The Radiohead career trajectory didn't begin with Creep -- the single that could have killed a lesser band -- but rather with The Bends: an album of sharp songs, symphonic-framed rock, great material which sometimes referenced a larger tradition (the Lennonesque Just) without being self-conscious about it, and delivered with a rare passion.

The Bends announced a band that had breadth and longevity, and in subsequent years they had the courage not to recoil from the challenge and possibilities this breakthrough afforded them. The impressive 2009 repackaged and expanded Special Edition box set of The Bends (right) comes with a 21-song extra disc which includes tracks from the EPs which accompanied the singles, various b-sides and four songs from a BBC session. Very impressive.

There is also a DVD disc which has both the UK and USA versions of High And Dry which makes for an interesting marketing comparison (black'n'white in the UK, colour and a diner setting for US consumption) and the clips for Fake Plastic Trees, Just and Street Spirit, all of which show just how much money and time was being spent on the band at this stage.

There is also film of eight songs from a gig in The Astoria, two from a Jools Holland show, studio sessions in Holland and three Top of the Pops appearances. And the box contains collector cards.

Seducing the love that came closest to breaking me, I explored the depths of profound - listening to this at the same time, and subsequently.

The Bends as explained by G's review was the take off point for a band full of flair sprung from deft musicians. Thom Yorke's falsetto singing is a joy especially on Fake Plastic Trees as he yearns `If I could be who you wanted' I think most everyone wanted to give him a hug. So for a band who found stardom too hard after OK Comp's massive press and deserved adulation. They did look suitably miserable in that doco on their discomfort. Notably they were too popular at that stage to even avoid the making of such material.I was fortunate to have those tracks to listen to care of a dodgy All Hail To ... CD I'd bought in Bali which kindly added those songs to the mix. An album I kinda liked. They recently stuck it all together on In Rainbows which is such a rich blend and I suggest has a better longevity than OK Comp.