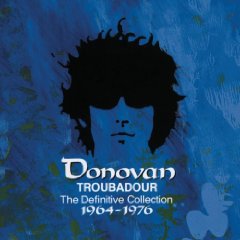 When I interviewed Donovan in 1998 -- mindful I might have to introduce him to a readership which had probably never heard of him -- I noted that even back in his heyday of the Sixties he'd been a hard one to figure out.

The "folkie" tag he'd been pinned with after the success of his first songs Colours and Catch the Wind (and his "protest" song, the cover of Buffy Sainte-Marie's Universal Soldier) hardly seemed to fit for very long.

He very quickly made psychedelic pop with Sunshine Superman and the slightly menacing Hurdy Gurdy Man (which had three quarters of Led Zeppelin playing on it). Then there were his song with jazzy elements -- Sunny Goodge Street -- and the rock thing with Jeff Beck on Barabajagal.

And all that came within four years, most of it in a little over two.

By 1968 Donovan -- who went to Rishikesh with the Beatles and Beach Boys, saluted Mama Cass in The Fat Angel and was consider "a nice guy" by Bob Dylan -- had effectively blurred whatever boundaries the pop magazines of the day might have wanted to put on him.

He taught Paul McCartney to finger-pick (Macca used it on Blackbird), was a longtime friend of George Harrison's, headlined at the Monterey Pop Festival in '67, sang with Andy Williams, collaborated with David Bowie in '74, and his Sutras album of '95 was produced by Rick Rubin.

Rubin wanted to know how he had achieved such a live sound in the studio back in the day.

"I told him we used to do three songs in three hours in the studio with no affectation or effects -- that's how you get a live sound!

"Sunshine Superman took a long time by those standards, six days. But a recording session was essentially a stop-off on a whirlwind tour of one-night stands."

Since then he has had his songs covered by everyone from Courtney Love (the nasty-edged Season of the Witch), the Posies, Nigel Kennedy and Glen Campbell to the Butthole Surfers to Lou Rawls.

There is no shorthand on Donovan -- and consequently no single album that effectively wraps up his early career (the latter decades are of less interest). Even this collection, despite that "definitive" in the title, doesn't include folk like Ramblin' Boy or delights like the Indo-folk of Three Kingfishers.

But it is as good as it gets on a man who I found to be most unlike what I expected when I did that interview.

He was not only businesslike but "professional to the point of irritation", I noted. He asked me if my tape-recorder was switched on, spelled out the names of his children, and ticked off career statistic (more than 200 covers of my songs, I'm doing archival work on my back-catalogue, and so on), and readily name dropped.

Not that he needed too.

But he was also polite and cheerful, and happy to speak about those crucial years when he moved out of the shadow of being "Britain's Bob Dylan" and had his own voice. Or voices.

"They cast long shadows, " he said of his Sixties songs, "but I'm not really an entertainer who has to keep being in the top 10. I'm more like a poet and am satisfied with that. I don't mind singing my history at all, but half of radio is classic hits so they are still playing those songs.

"Somewhere in the world right now you could guanrantee someone will be playing Stairway to Heaven or my song Mellow Yellow."

He was probably right: but as noted, there was more to Donovan than that stoner hit, or the brilliant Sunshine Superman.

This collection might shortchange in a couple of places, but it certainly has his hits (those mentioned above as well as Atlantis). It also has trippy folk charms such as There is a Mountain, the magical and string-coloured Lalena (produced by pop master Mickie Most, as were most of his early songs), the almost spoken word To Susan on the West Coast Waiting, the mystical Guinevere with Shawn Phillips on sitar, the rocking Epistle to Dippy, Cosmic Wheels with Cosy Powell on drums and Chris Spedding, Teen Angel which anticipated the singer-songwriter movement out of California in the early Seventies. . .

Donovan never quite sounded like what anyone might have thought, and when I put that to him he laughed. He knew what it was.