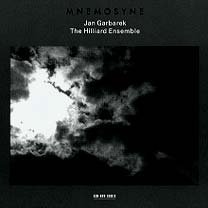 When jazz saxophonist Jan Garbarek teamed with the classical vocal group the Hilliard Ensemble for the warm yet glacial holy minimalism of Officium in 1994, not even ECM label boss Manfred Eicher - whose idea it was - could have predicted its crossover success.

It became the banner album in ECM's already excellent 10-year-old label for contemporary classical recordings, ECM New Series. It sold more than a million copies . . . and that's a lot for an album of medieval chants and almost clinically exact, lonely saxophone.

This long-awaited follow-up was an even bigger ask, however. It was this double disc for a kickoff and the difficult-looking title comes from the mystic and mad 19th-century German poet Friedrich Holderlin. It means the mother of the muses, and, apparently, also memory in ancient Greek.

For it, Garbarek and the Hilliard Ensemble further expanded the contract they wrote for themselves to include elements of Basque folk, Garbarek's explorations of Indo-Arabic microtones . . . and the recording process was closer to jazz improvisation than for the heavily scored predecessor.

All of which made this, on paper, look a much more difficult proposition.

Here again is that same sense of quiet discovery of music in its purest and least referential form, the same blend of dark, male-voice harmonies with Garbarek's woman-toned soprano which comes in like a fifth voice, and a similar sense of transcendental timelessness.

With Officium, because the album was reviewed mostly in classical circles, most comment was made about Garbarek, who played an instrument largely unfamiliar to a classical audience. And in way unlike those in the American jazz tradition.

Coming the other way however it is perhaps the purity of tone, unwavering ability to weave counter melodies, and the Hilliard's sense of the formal which impresses. They convey a worldly stateliness and gravitas, and because of that Mnemosyne is so much more interesting in its many parts.

The 13th-century French Novus novus, for example, is given a very chipper reading by the ensemble and Garbarek takes off on a particularly airy, sometimes pastoral, flight of his own.

And Delphic Paean, written about 150 years before Christ, is constructed over a curiously repeated vocal passage of odd harmonies above which Garbarek weaves particularly anxious lines.

The 16th-century Russian Psalm - on which Garbarek switches to brusque tenor - is such a dark piece you can almost see the censers swinging, although the saxophonist's abrupt swoops sit at odds with the liturgical chanting.

There are what might be called "lighter touches" (Strophe and Counter-Strophe) but mostly the whole possesses that rarefied atmosphere of its predecessor.

Doubtless there will be many who studiously sift these waters, but most of us we won't be able to discern the Basque folksong fragments from which Mascarades was composed; we'll just listen with something approaching awe as the glorious latticework of saxophone and vocals is created.

Yes, there's a lot of it - although nobody says you have to listen to the full 100 minutes in a stretch. And, yes, an album with a couple of Estonian lullabies and in a cover with stills from Bergman's gloomy Seventh Seal is probably not everyone's cup of tea.

However, at the purest of musical levels Garbarek and the Hilliard Ensemble again created something complex, exploratory and intelligently diffuse. But it is equally and endlessly rewarding when simply just drifting past, as a kind of intellectual ambience.

It is extraordinary either way.