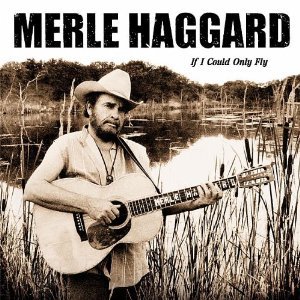 Not too long after the time of this writing in mid 2012, 73-year old Merle Haggard died and against every preconception we might have had about his tough, booze-afflicted life and hard travelling -- he was lucky to survive that long.

When he appeared at the White House in 2010 four years before his passing to pick yet another well-deserved honour he scrubbed up pretty well.

Stories about Haggard are legion and legendary -- we needn't repeat the ones about time in prison, the five wives -- but rather turn attention to his fine songwriting. And a rare ability to interpret a lyric from the inside.

Haggard, like many of his generation of country musicians, had done most things and opened this exceptional album with the moving, reflective Wishing All These Old Things Were New which sets the tone: "Watching while some old friends do a line, wishing it was still the thing even I could do ... watching while some young men go to jail, and they show it all on TV just to see somebody fail."

When he sings about "the good ol' days before it all fell through" it is as much about the times in which we live as something personal ("the kids don't want my cigarettes around . . .").

Haggard knew himself better than anyone, so produced this one in his own studio, it came out on the same label as Tom Waits' more recent work (Anti) and it allows him to touch base with much of his past (Honky Tonk Mama) with his small and sympathetic band.

It sounds effortless, especially on laidback material like Crazy Moon.

There's a wistful quality here too (the closer, Listening to the Wind, is jes' plain lovely) and throughout he punctuates hard-learned lessons ("I knew some day you'd find out about San Quentin," he sings on I'm Still Your Daddy).

Apparently when Tammy Wynette died she had left word she wanted Merle to sing the title track -- only one of two non-originals here but a longtime staple in his live shows -- at her funeral. The lyrics suggest why, Haggard's worldwise delivery confirms it. He sings it from the inside.

The gentle Turn to Me has that same direct simplicity of lyric that Willie Nelson once claimed as his own.

Reflective, sentimental without being cloying.

Merle Haggard made any number of albums in his long career, and as recently as 2010 released one under the truth-telling and unapologetic title I Am What I Am.