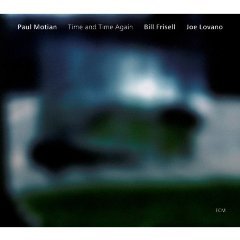 Because jazz is -- as the critic Leonard Feather noted in the closing overs of the last millennium -- the classical music of the 20th century, in it you can hear the human condition reflected.

Or in other words, each generation creates the jazz it requires.

In the post-war period things adopted a cooler and more sophisticated mood (less dancing, more sitting around thinking, smoking and being hip) and so artists in Brooks Brothers suits like Miles Davis and John Coltrane came to exemplify the era.

Then in the late 60s there was fusion when jazz merged with rock and funk (Davis almost working with Jimi Hendrix), and politicised free jazz which extended the contract from the jazz clubs of New York to the headquarters of the Black Panthers.

In the 70s however things changed again: the focus moved from the United States to Europe; and a generation which was probably tertiary educated and had assimilated Davis et al was looking for something new to reflect its more emotionally distant mood.

Which explains the enormous and continued success of the ECM label out of Germany.

It was founded in 1969 by Manfred Eicher who had a classical upbringing but loved urgent jazz, and he wanted to bring the same production values to jazz as say a string quartet.
But he was also a European and had a kind of cerebral sensibility, so his label -- although some of the early acts were Americans, often displaced to Europe because of indifference to their talents at home -- quickly established a roster of cool, poised and some might say dispassionate European players.

Album covers often had an austere quality which reflected the music within.
Few musicians stood as a symbol of the label's pristine sound quality and almost clinically melodic and intellectual cool than saxophonist Jan Garbarek. His superb Places of '77 was a model of the ECM ethos.

What Eicher also did was shift the musicians into working with fellow travellers on his label. Yes, he had some established acts such the Art Ensemble of Chicago, unique individual talents such as Keith Jarrett, and a roster of interesting guitarists (Pat Metheny, Terje Rypdal, Bill Connors, John Abercrombie, Ralph Towner) -- but it was often the combination of artists that made ECM fascinating, if sometimes hard to put albums on your shelves in any manageable sequence.

Garbarek for example recorded with Rypdal, Towner, Connors and Bill Frisell -- all of whom had albums under their own names, and recorded with yet other line-ups.

There were a lot of small but overlapping Venn diagrams in the ECM world.

Over time the label changed -- there was an ill-considered foray into a kind of post-punk meltdown thrash in the early 80s -- and inevitably Eicher launched the ECM New Series to accommodate contemporary classical works (some of which came from the jazz musicians, and others on which they played).

But at core ECM has continued to make poised, improvised music which is more emotionally engaging than those album covers and some reviewers might lead you to think.

The musicians on this album -- drummer Paul Motian, guitarist Bill Frisell and saxophonist Joe Lovano -- are of the generation which has, due to the attrition by age of those who preceeded them, become the senior statesmen of jazz.

Yes, figures such as Ornette Coleman and Joe Henderson are still around, but their output is so occasional as to be of little impact today.

However these guys -- Motian now in his mid 70s, the other two in their mid 50s -- are not only still very visible in numerous and diverse line-ups, but have played together in this bass-less trio since the 80s.

Their '81 debut album together Psalm is a classic, and I defy anyone not to be wooed and won by the woozy charm of the track Mandeville on it.

On this career-highpoint album, as always, they caress rather than cajole, tease out melodies rather than test them, and everywhere is that weightlessness propelled by Motian's melodic drumming, Frisell's shimmering guitar and Lovano's fluttering flights.

In places you may hear the influences of Coleman (notably on the seven-minute In Remembrance of Things Past) and Thelonious Monk, but mostly this is a singular vision by three of the finest jazz musicians of our time.

Early on in his career Lovano enjoyed acclaim as a post-bop player and had a tough quality. The man could really play those sheets of sound -- but in this context he lays right back on tenor, although sometimes that long history pops out and you can hear where this might go if drummer Motian didn't act as a restraining and subtle hand.

Motian is a cornestone artist on ECM.

Frisell has always seemed the odd card: his unique sound is like a colour palette and away from ECM he counts among his friends and artists he has played with the likes of Tom Waits, Elvis Costello, Vic Chestnutt, numerous alt.country acts, and experimentalists like John Zorn. He also played with Garbarek.

So using this delightful and quietly engaging album you can ease your way back through Frisell's fascinating career, the ECM label to discover artists such as Garbarek (whose biggest success came with Officium, the ECM New Series album which put him alongside the Hilliard Ensemble) or track down a copy of Psalm. Or maybe check out guitarists such as Pat Metheny and Terje Rypdal whose early ECM albums painted sonic landscapes.

ECM -- which stands for Edition of Contemporary Music -- is a world unto itself, and thoroughly deserving of you taking a journey into its quiet heart.
Right back at the beginning some critic said of the label it offered "the most beautiful sound next to silence".

Doesn't that sound worth checking out?