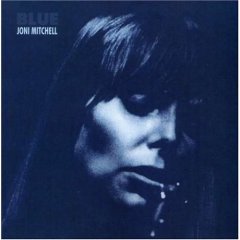 In his 2006 book The Seventies -- excellent digressive but interlocked essays about the cultural and social movements of that volatile decade -- the London-based writer Howard Sounes namechecks singer-songwriter Joni Mitchell any number of times.
As he should.
Mitchell's albums helped define the Californian singer-songwriter movement which emerged at the tail end of the 60s and introduced the likes of James Taylor, Neil Young, Crosby Stills and Nash, Warren Zevon, and eventually the Eagles to the wider world.
In the noisy climate of Hendrix, Led Zeppelin and early heavy metal many of these sensitive types struggled to be heard -- literally.
At the Isle of Wight Festival in August 1970 Mitchell turned on the heckling and high audience and yelled, "Listen a minute, will ya? Will ya just listen a minute?"
She was about to sing a new song My Old Man about her relationship with James Taylor -- and it wouldn't be the first or last highly personal song about her lovers Mitchell would write. In fact she was "romantically linked" with every member of CS&Nash at some point -- and Rolling Stone, somewhat uncharitably, once voted her "Old Lady Of The Year" for her serial conquests.
As Stephen Stills observed: "She's a love gangster. Every man within fifty feet falls in love with her."
It seemed to be true, but it also gave her a lot to write about.
Unlike Dylan (and his acolytes) in the 60s whose work was often impersonal, spoke of general concerns and became almost wilfully allusive and elusive, Mitchell's lyrics dealt with her world: she sang of her loves and life, of California, of places she had seen and people she had met . . .
As David Crosby noted, "Dylan could write Chimes of Freedom and blow your mind with his insights into the social structure, but Mitchell can write about people, or your own heart, or your most personal feelings -- and she'll drag them right out just to dangle them in front of you."
Mitchell's music was an inviting world, often wrapped up in cover art of her own paintings and sung in a seductive manner by a woman whose singular features were high cheekbones, long blonde hair and white teeth.
Joni had it all, and knew it.
"She's about as modest as Mussolini," said Crosby in '74.
She had no reason to be modest however: at the time of that Crosby comment she had recorded Court And Spark which saw her for the first time fully embracing jazzy structures which would become the hallmark of her later career.
In The Seventies however, Sounes makes a convincing case for the experimental The Hissing of Summer Lawns (1975) as the definitive Mitchell album which, oddly enough, didn't find much favour with critics at the time.
Yet the album where Mitchell came to first fruition as An Artist (as opposed to just another folkie girl with long hair and eyes-closed songs) is Blue from '71 which not only ushered in the whole 70s singer-songwriter movement but was, in the words of one rock encyclopedia from the post-punk late 70s, "an incomparable album, based mainly around a suite of songs to a former lover. From that moment on, she has been in a class of her own in the 70s".
Musically spare and refined down to elements, Blue was the first time she approached the pure poetry she had been reaching for on albums such as Clouds and Ladies of the Canyon -- and she typically put herself out there.
Little Green is about the daughter she gave up for adoption five years previous, The Last Time I Saw Richard about her brief marriage to folk-singer Chuck Mitchell (from whom she took her name), there is My Old Man, and California is the first of many songs about her adopted homestate which, as a Canadian, she saw with fresh eyes.
(Sounes notes that the English painter David Hockney also found the light and imagery of California worthy of comment when most LA artists couldn't see it.)
For Mitchell, the album Blue was her turning point and artistic breakthrough, and shortly after its release she retreated to a cabin in Canada and emerged with a head full of poetics and jazz-rock possibilities far ahead of her peers.
Nailed down in specific language yet somehow alluding to things beyond the known, Mitchell created a threshold on Blue which she didn't retreat from in subsequent albums, and which others found daunting.
After Blue there is a natural path through The Hissing of Summer Lawns and into Hejira (76), or into her contemporaries such as Laura Nyro, Judy Collins, James Taylor, the CS&Nash gang, acoustic Neil Young . . . 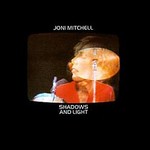 There is another tangent however: that of the jazz-rock she created.
Her album Mingus in '79 was not her most successful (although it was undeniably ambitious) but the live Shadows and Light from the following year with a hip jazz band opens the door to the Herbie Hancock album River: The Joni Letters.

It was released the same day in late 2007 as Mitchell's album Shine, her first album of new songs in nine years -- and something of surprise given she had announced her disenchantment with the music industry many times.
In 2002 she denounced it as "a cesspool" from which she was retiring.
But she is back -- although, as Blue announced, an artist of Mitchell's stature never really goes away.

Good article,with good thoughs about this singer. I like Joni since my teenage years. Here in Brasil there´s not a great lot of listeners to her work. Only folk-rock 'freaks' and musicians know her job and this knowledge is rated as 'sophisticated taste'...
I really enjoyed your review.
Tks a lot!