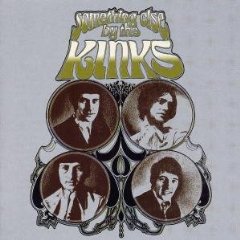 Anyone looking for that low door in the wall which allows entry into the distinctive garden of English pop-rock is, almost invariably drawn to the Kinks whose songwriter Ray Davies had a mainline into the Anglo-heartland for almost decade from the mid 60s.

Davies' songwriting could sometimes be satirical or cynical, but more often than not he felt for his characters -- and his songs are very character-driven.

His shining moment Waterloo Sunset is a fascinating study of observation as much as songcraft: it is an outsider's view of the world, and whoever that person might be is as interesting in his remoteness as the "Terry and Julie" who meet at Waterloo Station every Friday night. The song has a wistful, twilight quality: the yellow sun sinking over the dark London landscape seems to offer optimism, the chance of love among the ruins.

Davies' writing for the Kinks sprung more than its share of classic 60s singles from the primal You Really Got Me through gorgeous rock-ballads such as So Tired to social observation (David Watts, Well Respected Man), great pop (Dedicated Follower of Fashion, Days, Stop Your Sobbing) and quirky off-beat hits such as Lola.

But there was more in the details, as on their fifth album Something Else -- released as whimsical Edwardian foppery-with-bellbottoms flower power was starting to make an impact in the British music scene.

Davies would have none of it -- indeed the earlier Dedicated Follower of Fashion took a sharp poke at Carnaby Street dandies, and on End of the Season here he adopts a Noel Coward aloofness and sings, "I get no kicks walking down Saville Row".

Davies' interests -- perhaps because he was married and living a more settled life than his peers -- were elsewhere, in suburban drama (the sympathetic Two Sisters here), local people and their manners (the Cockney rhyming slang of Harry Rag) and of course that glorious observational Waterloo Sunset which closes this fully-formed album.

As British critic Brian Hogg noted in the early Eighties, "Something Else completely confirms the Kinks' own self-determination: making no concession to their own contemporary environment, the album simply progresses within the the group's own music. It's pure England . . . the album represents the Kinks' and Ray Davies', crowning achievement".

It also opens with two great tracks, the social envy of David Watts (which Paul Weller of the Jam took into much more bitter territory when he covered it a decade or so later), and brother Dave Davies' melancholy Death of a Clown which is steeped in Dylan but manages to find its own English tenor.

Then there are songs like the Latin-flavoured No Return, the somewhat sad story of family expectation in Situations Vacant, the languor of Lazy Old Sun, the oh-so-English entitled Afternoon Tea . . .

Something Else was the album that identified the Kinks, and specifically Davies, as a band that were increasingly marching to their own beat. The r'n'b covers of yesteryear were long gone and now an insightful tragi-comic style took over. Their follow-up was the cricially accalimed poor selling The Kinks Are The Village Preservation Society (a sepia-toned view of an older England) and then Arthur (or the Decline and Fall of the British Empire), two decent enough albums.

But Something Else was the turning point and the way into this specifically English style of pop-rock. Davies' songs profoundly influenced Weller and were a touchstone for later Britpop bands such as Blur.

There a persuasive case to be made that distinctive English pop began right here.