We cringed when British actor Steve Coogan was appalling television, then radio, host Alan Partridge in the British television series Knowing Me, Knowing You and I'm Alan Partridge.

He was fired for killing a guest, so after that he was off to Radio Norwich for the dawn shift and two series of I'm Alan Partridge, shows which invited favourable comparisons with classic British comedy programmes such as Fawlty Towers.

Coogan then smartly pulled the plug on this remarkable comic invention.

He then set the Manchester rock scene alight as Tony Wilson in the feature film 24 Hour Party People, although for a film which purported to be about the music of "Madchester" in the punk-to-dance years of the late 70s to early 90s there was an awful lot of Coogan's Partridge in his mannerisms. And despite the title it was almost scrupulously free of party people, and indeed dance parties.

What you got instead was an often very funny deflating of the myths of the Manchester scene, and some humanising of some of the central figures (record producer Martin Hannett is played by Andy Serkis as a difficult, drunken'n'drugged prat despite his genius). The rapid-fire editing also created a sense of pace and momentum which was paralleled in the terrific soundtrack of the Sex Pistols, Joy Division, Happy Mondays and others.

The hub of the story was record-company boss and nightclub owner Wilson but it was Coogan's likeably irritating and permanently irritable Partridge character who often took centrestage as Wilson, a man who (like Coogan) was also widely known for his television persona (in Wilson's case as a Granada presenter). 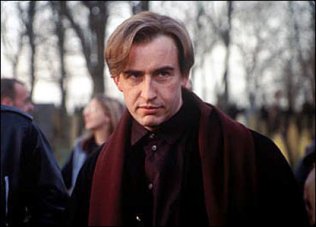 Coogan lit out for LA to advance his movie career and you could can catch him alongside Alfred Molina in Jim Jarmusch's Coffee and Cigarettes, but you would have been wise to miss him as Phileas Fogg (with Jackie Chan as Passepartout) in the seriously flawed, big-budget flop Around the World in 80 Days in 2004.

Despite the US$100 million (NZ$146 million) budget thrown at it, the movie looks like it was written by a committee whose members had never previously met. It bombed in the States and was largely ignored elsewhere. It wasn't the best time to be talking to Steve Coogan but someone had to do it so in late '04 I picked up the phone and spoke to a chain-smoking, slightly nervous-sounding and defensive Coogan . . .

In the States your name wasn't high in the promotion for 80 Days, it was billed as a Jackie Chan film. How did you feel about that, given this was the one that could have made your name there?

Disney were in charge of the marketing and they see the money in Jackie so I understand why they made that choice. Interestingly, it is being marketed differently in England and Europe; they are marketing the movie as opposed to Jackie's name, which may be due to their experience here.

Not to put too fine a point on it, it didn't do that well in the States, did it?

No. Not as many people went to see it as I would have liked. I think in America I'm fortunate that I've done enough work before that, and since, with stuff coming up, that I've still got a following. It was an unusual project to do and a bit out of the ordinary for me. But I think my career is intact and my reputation here is based on a body of work. What it means is I'm not going to get a huge pay cheque for my next movie, but a lot of the cool directors still want to work with me. Let's say I've emerged from it unscathed.

What is your profile in the States? 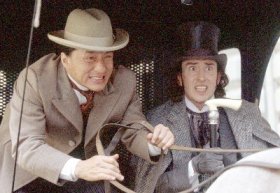 Because Alan Partridge hasn't been broadcast here, cinema audiences aren't aware of my comedy incarnation. The people who are aware of me see me as someone who crops up in arthouse films.

Are you trapped by Alan Partridge in Britain?

Not trapped so much, but the industry isn't big enough, so there are fewer opportunities. I've moved into production and my company makes comedy shows I'm not in. 24 Hour Party People was my calling-card in LA and it made people sit up and take notice. Commercially, it didn't do well but in Hollywood it was very talked-about and got me a lot of respect and interest.

In England, while it's nice to have done something that is well received in a comic way, it's also nice to be able to change things and move around.

In Britain, it seems possible to move between stand-up and television and movies, but in the States is it best to establish yourself in one area so as not to confuse the audience?

When you get to big bucks, yes, but I'm not - so in the States it's more flexible for me. One of the benefits of not being a name here is that I can move around and am offered different and interesting things; I just don't get offered huge amounts of money.

In England, if I kept doing comedy I'd probably have a more fruitful existence but artistically it wouldn't be so satisfying.

So here, conversely, I have more choice.

Like working with Jim Jarmusch on Coffee and Cigarettes?

Yes, a great experience. Jim phoned and asked me to be in it and we talked about the idea and he wrote a script around that.

Alfred Molina and I met him in New York and spent a day with the script.

It was a collaborative thing between the three of us and the next day we shot it. The whole process took two days.

Jim's an auteur ,like Michael Winterbottom [director of 24 Hour Party People], and generally they work with people they respect and want input.

I found Jim very laidback, with a healthy sense of humour.

I had a bit of input, in that director Frank Coraci [who also did Adam Sandler's The Wedding Singer and The Waterboy] would ask my opinion and when I had the opportunity I added embellishments.

I was a passenger who was allowed to do a bit of backseat driving occasionally.

But on a different scale.

Yeah, there were huge budgets and it took 5 1/2 months, which is about 10 times as long as most low-budget movies. It takes over your life for half a year.

When I'm in Britain my company is usually involved in several different projects so when I'm on a movie set no one can get me and all I've got to worry about is my lines. So 80 Days was less work, not more. We flew all the way to China to do one helicopter shot on the Great Wall of China. That's something to tell my grandchildren.

It's a very English film, more so than the famous version with David Niven. Does that mean anything to Americans?

They like English eccentricity and get some of it and not other parts. Many Americans think all streets in England are cobbled, so there is a gap in their knowledge. Everyone who saw the film loved it, just not enough people did.

What's next for you?

I've finished two films, a thriller with Rebecca Romijn-Stamos and Selma Blair called Alibi, and The Opposite Sex with Laura Dern and Maggie Gyllenhaal.

I'm about to do another film with Michael Winterbottom, which I'm co-producing through my company. It's based on the 18th-century novel Tristram Shandy.

That's an extraordinarily complex book. Is it filmable?

No, it's not, which is why Michael wants to make it. I'm playing the lead and another part, which will be Steve Coogan, because it goes between past and present, and the actors who are making the film. It plays with the form of reality, and of what you are watching.

So, despite 80 Days you are still very busy?

Yes, I was involved in writing 24 Hour Party People so a lot of what I do I generate myself. It's not as though I'm waiting by the phone wondering why no one appreciates me.