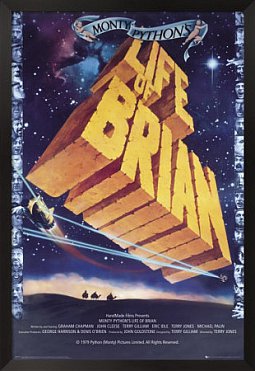 It seems only yesterday that Mel Gibson’s The Passion of The Christ was being debated for its uncompromising brutality. I wonder if those who bought it on DVD watch it often?

And will they watch it 30 years time?

Gibson has a sense of humour -- he made Braveheart after all -- so maybe he would get a laugh out of the irreverently hilarious religious spoof, Monty Python’s Life of Brian.

Will people watch that 30 years after it was made?

Life of Brian appeared in ‘79 and the 25th anniversary remastered anniversary edition DVD came with an amusing, informative on-set doco tracing the Pythons’ BB (Before Brian).

The film is also available in a mid-price bumper pack along with the earlier Python films And Now For Something Completely Different and The Holy Grail (the latter with swags of terrific extra features including a BBC feature, behind the scenes doco and original drawings by Terry Gilliam).

In their Autobiography, Python members are honest about these films. Something Completely Different was simply some of the television show sketches re-shot over a period of six weeks (Gilliam: “It wasn’t really like films because it was still the old thing”) and alcoholic Graham Chapman was difficult and couldn’t remember his lines.

It didn’t do well financially so for Holy Grail they worked with a more coherent plot, although John Cleese says little of the first draft ended up in the final film.

Again however Holy Grail was little more than thematically linked sketches. Chapman, still drinking, was a mountaineer and member of the Dangerous Sports Club in real life but froze when he had to climb across “The Bridge of Death“. It was a fraught project which Eric Idle remembers as no fun, and when it screened to investors it was meet with polite applause.

By Life of Brian things were more professional: Chapman wasn’t drinking, and there was a tighter script.

The first draft of the script was done by the middle of ‘77 then various Pythons took it on a writing holiday to Barbados for polishing. However when EMI Films, the original backers, saw it they thought the film would tank.

Longtime Python fan George Harrison stumped up around three million pounds (he had the briefest of roles) and shooting started in Tunisia using locals who had, ironically, worked on Franco Zeffirelli’s Jesus of Nazareth series.

A rough cut was screened in early ‘78, the film was re-edited and finally appeared in cinemas -- amidst great laughter and some controversy -- in ‘79.

Curiously, various Pythons found themselves explaining the difference between heresy and blasphemy to religious leaders, even though they themselves couldn‘t agree on whether it was heretical or not.

As much as anything the film is a political satire (the factionalism amongst anti-Roman activists echoing Marxist splinter groups), and it gave up some of the funniest lines in cinema, not the least being, "He’s not the Messiah, he’s a very naughty boy” from Brian’s mother after she finds a naked woman in his room.

Curiously enough that woman was actress Sue Jones-Davies, who in the late Nineties became mayor of Aberystwyth in Wales, a town which at that time still banned the film.

These days Life of Brian is considered a cinema classic, but it was the last coherent and cohesive film the Pythons made in their erratic career in movies: one coherent and hilarious movie (Brian) and two films which are a jumble of sketches (many of which are admittedly classics: the parrot sketch and Upper Class Twit of the Year in Something Different; the Knights of Ni, the Black Knight and the killer rabbit in Holy Grail) and four years after Brian, The Meaning of Life by which time they were largely going their own ways.

“And that was really the end of Python as such,” says Gilliam.

Idle’s stage show Spamalot based on Holy Grail opened on Broadway to great acclaim, but the Pythons’ legacy of heretical surrealism was in their innovative television series, and these extraordinary, idiosyncratic and often courageously silly films.

And Life of Brian, oddly enough, has an important message.

It might not be the Sermon on the Mount, but it’ll get you through this mortal coil: always look on the bright side of life.

WARNING: IF YOU DO NOT ATTEND A GIANT BOOT MAY DESCEND UPON YOU!