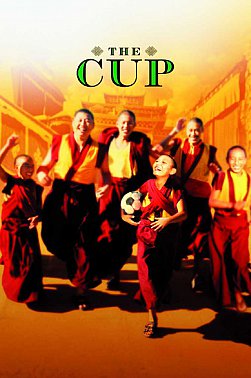 There is a wry scene halfway through The Cup, the debut feature by Bhutanese film maker Khyentse Norbu. In a remote Buddhist monastery in the Himalayas, novice monks are obsessed with the World Cup soccer competition. An older monk, Geko, attempts to explain it to his abbot, who's bemused by the idea of two nations fighting over a ball. But the abbot wants to know what they get by winning.

The abbot cradles his teacup in his hands and considers this. He and Geko nod silently, barely able to suppress smiles.

It is a telling, typically understated scene in a movie which is unexpectedly humorous and irreverent, yet carries deeper messages just below its gently beguiling surface.

Yes, director Norbu laughs quietly, soccer might be an unexpected theme from a man considered an incarnation of a famous 19th-century Tibetan spiritual leader who goes by the ecclesiastical title His Eminence Dzongsar Jamyang Khyentse Rinpoche.

But many years ago he learned novices were slipping out to watch soccer on television in the nearby village. He grappled then with an explanation to his abbot. Two countries fighting over a ball? For a cup?

He still sounds amused by it.

At one level The Cup is a shrewd, light comedy about youthful indiscipline and enthusiasm (a soccer-crazy young monk wears his Ronaldo T-shirt beneath his robes). But it is also a small film about big ideas, notably the schism between the traditional and the modern, and contrasts are drawn between the young novices and the even less worldly Tibetans who arrive at the lamasery.

The Cup depicts the reality of a contemporary lamasery where monks wear sunglasses and young boys graffiti walls with soccer slogans, as high-spirited as any pre-teens in a Western boarding school. The film maintains a delicate balance between storytelling and metaphor, although Norbu says a movie with a message was not his original intention.

"But as I was shooting and writing, I realised I could also take advantage of sending a message, one to fellow Tibetans or Bhutanese, saying modernisation is not a threat and we could use it for a good purpose.

"And the other was to the world in general and people in the West who have certain preconceptions about Tibet and Tibetan Buddhism. They think [Tibetan Buddhists] don't eat or sleep probably, or watch television. That's not true and I think it's important people realise the human side of these people."

Norbu is clearer about Tibet's future than Westerners, who have some misty-eyed perception of it as a spiritual Shangri-La frozen in some imagined utopian past.

He says it's important for those in Tibet and Bhutan - which only got limited local television a decade ago - to be in touch with the modern world. Modernisation and technology is not a threat. With the right attitude and motivation you can use them for your own benefit. They become a threat when you lose your own values, get too attracted to them and put too much value on consumerism.

He believes it is necessary for Bhutan to cautiously embrace new ideas such as film and television because it cannot afford to romanticise itself. After all, it sits between the opposing powers of China and India.

Born in Bhutan in 1961, Norbu was raised and educated in nearby Sikkim. He continued studies in Bhutan and India and his interest in film dates from seeing television at age 13. He acquired an apprenticeship under Bernardo Bertolucci when the Italian director was making Little Buddha.

Since that experience Norbu watched and studied films, notably those by Indian director Satyajit Ray, whom he admires. But when making his own feature debut he was mindful of the social climate in which he would have to work.

"Generally, everyone was very cooperative because more and more people realise film language is an important one to speak. There are some conservative people who might have had a bit of doubt.

"Many people around that region think film has always to do with sex and violence and I cannot blame them, because that's what they see, from Hollywood or India. If only they could see films like Ingmar Bergman's Seventh Seal they would change their minds," he says, adding his hope that his effort will encourage young Tibetans, especially in the exile communities of Europe, to make their own stories.

He hasn't had any criticism from Tibetan communities for the film - which depicts a drunken old lama - but admits, "I'm considered a Rinpoche, a high-ranking lama, so maybe behind my back there is back-biting - but that's okay."

The Cup won acclaim at film festivals including Cannes, but for Norbu the applause is fleeting. While he expects to make another film, he is hoping to finish promotion for this one, then go on a retreat.

"This is very new and has all the tendencies to corrupt, and I'd better be careful. Just like in the film, I am a normal human being, but probably I have more information about worldly life. "But the power of fame and attention is very intoxicating, and intoxication is strange, because before you know it, you are already there."

So might it have been better not to have pursued this film-making path?

Not at all, that would have been an extreme response - and the Middle Path is always encouraged in Buddhism, he laughs wryly. The title of this album lead by saxophonists Jake Baxendale and Jasmine Lovell-Smith became prescient when the world dived into various lockdowns. The two three-part suites here -- Baxendale's... > Read more