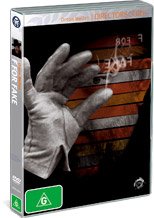 The context of this curious film needs to be sketched in before the innocent venture into its bewildering chicanery and capriciously obscuring nature.

Made in the early Seventies and one of the last films that Welles, a notorious unfinisher, actually completed, it is on one level a look at the life of the art forger Elmyr de Hory (if that was in fact his name) whom Welles knew, just as he also knew the writer Clifford Irving who wrote the book Fake about de Hory's remarkable life.

But then the layers get complex: Irving himself was revealed to have faked his "authorized biography" of the reclusive millionaire Howard Hughes (in which he asserted he'd met Hughes). This happened while Welles was starting to shoot Irving and de Hory for a film, and to that Welles laid bare some other hoaxes, forgeries and duplicituous trickery which appealed to him as a film-maker.

The film is full of sly editing so you never know what is real or what is not, Welles is shown doing magic tricks and impressive sleight of hand, and of course reference is made by Welles as to how he faked his way onto the stage in Dublin (he'd never acted before) and his notorious role as narrator in the 1938 radio broadcast War of the Worlds which -- if not an actual fake or deliberate hoax -- set off panic when people thought Martians were actually invading.

Add in Welles' girlfriend at the time, the luminous Oja Kodar, and Pablo Picasso (for whom Kodar poses, maybe), some maybe fake Picassos, playful editing and some fast'n'loose attitudes towards truth and you have a film which is part doco, part feature film, mostly confusing (deliberately) and rarely dull . . . if you can keep up, or be bothered doing so.

There are films within the film, and footage which looks like it is connected but actually isn't. It's not an easy watch.

On release it baffled audiences (why would the great Welles waste his time on such trickery?) and while it might have been annoying -- I enjoyed it at the time to be honest -- since the rise of mockumentaries (the Rutles, Christopher Guest's films such as Spinal Tap, Waiting For Guffman and so on) the notion of playing with reality has become not only more acceptable but often a perfectly fine substitute for "truth".

And "truth" in films or issues of integrity of image in docos have been the subject of much earnest debate, but never subjected to quite this much ridicule and mockery.

The DVD reissue comes with a deconstruction doco about it, Kodar interviewed and an audio commentary. You may think things are no more clear for their inclusion.

At the start Welles tells you that everything you will see in the next hour will be true.