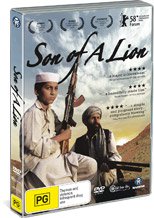 Although the ending of this award-winning film by first time writer-director Gilmour from Australia is something of a cop-out, that takes nothing away from the story and all that is told beforehand.

None of the actors had any previous experience, the dialogue seems largely improvised in places, the political subtexts come to the surface repeatedly but as a natural consequence of the action or conversation, and the location is breathtaking (for all the right and wrong reasons).

Twice in the past few years I have been lucky enough to fly over in daylight this remote and magnificent region of the world between Western Europe and India, and each time I looked down and wondered about who might live there (Osama Bin Laden?) and what their lives must be like in the mountainous and sparsely populated part of the world at the flashpoint between Iraq/Afghanistan and Pakistan.

This film takes you close: it is located in the Pashtun tribal area of northwest Pakistan where former mujahadeen fighters (who defeated the Russians in Afghanistan using ancient rifles and their knowledge of the land) and locals rub shoulders in dusty towns and where guns and hashish are more common than television sets.

The central figure is the boy Niaz who doesn't want to follow his father Sher Alam (a former mujahadeen fighter and medievalist in his thinking) into the gun trade. He envies the boys and girls who go to school.

It is a simple story in many ways, but is an insight into the remote world where rumour and propaganda (about both the Taleban and the Americans) is the subject of conversations which bear little resemblance to the political realities as Westerners understand them.

But that too is the film's power: here are people with their own codes of conduct, as riven amongst themselves as any people anywhere, and where there are few fixed precepts other than perhaps faith and the idea (among some) that things will carry on as they always have. They joke about Osama and how Americans perceive them.

Because this is a region where few foreigners venture, filmmaker Gilmour (an ambulance driver who fel in love with the people and the land) dressed as a Pashtun and relied on locals for help and support. As an isight into their lives -- the visit to the primitive dental clinic is terrifying, the conflict between fundamentalist views and the more liberal is everywhere -- it is quite extraordinary.

As a film it is perhaps less successful for its story arc. It is no surprise that I, and many others, thought it was a documentary for the first 10 minutes, and in a way that might be its failing as much as its stength. It is perhaps too much the ethnographic study than a work of fiction.

Yet that ambivalence has great appeal and makes for rivitetting viewing.

There are few films which come out of this region and that alone makes it special. That it feels true is the added dimension.

son of a lionover there