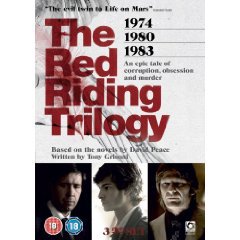 For sheer gruesome, grim and compellingly dark viewing this trilogy of made-for-television films based on the novels of David Peace would take some beating: murder is the backdrop; corruption at every level of the Yorkshire police is rife; the hunt for the Yorkshire Ripper casts a shadow over everything; and it rains most of the time.

The North of England has rarely looked so bleak and unforgiving, and its characters so ruthless, unromantic and menacing.

This film noir series (the stories, despite being set in different years, are linked) is more like film blood rouge or film constantly grey.

All that said, by way of a consumer warning perhaps, there is something utterly compelling about these complex, layered stories in which good people die as often, and sometimes with more frequency, than bad. Truly, no one is innocent.

The first story, 1974 (directed by Julian Jarrod) follows a smart but smart-mouthed young journalist who returns home from London, starts snooping around a trail of corruption and graft, stumbles into a murder investigation and finds himself a target. It gives nothing away to say it doesn't end well.

Four years later -- in the film directed by James Marsh -- a new chief is assigned to head the police investigation into the serial killings by the Yorkshire Ripper, there are suggestions that maybe two killers are at work and the second is using the Ripper killings as a cover, the layers of police corruption are peeled back . . . And it doesn't end well. In 1983 (the film directed by Anand Tucker) there is a chilling deja-vu: as in 1974 another 10-year old girl has gone missing in the town of Morley, Yorkshire and another investigation begins, equally revealing of dark doings in high places and a link back to the original episode. Does it end well?

For unflinching realism and their understated period-look, The Red Riding Trilogy makes for engrossing viewing. There are top class actors on hand -- among them Sean Bean, Paddy Considine, Peter Mullan, Rebecca Hall and David Morrissey -- and the supporting cast equally look like they have been pulled off the streets of Yorkshire towns and villages.

Blending fact and fiction with chilling intensity, these three films perhaps overstate police and civic corruption, and the intelligence of those who would act as puppeteers above the law, the media and the lives of ordinary people. But the threads which link the stories (a few characters, the location, the tone of despondency, the rain) make them gripping viewing, even when the soundtrack sometimes suggests what you should be feeling.

What you will be feeling however is a sense of unease, and the knowledge that the local tourism authoriities won't have ever thanked author Peace -- or Tony Grisoni who has adapted the novels for the screen -- for drawing attention to their region.

And you thought Nick Cave dealt in the dark stuff?