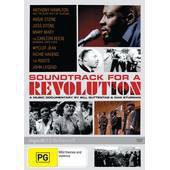 Anyone who gets depressed and thinks little social progress has been made need only to look at this ultimately uplifting if sometimes horrifying film to see how far America has come in the past 50 years.

Here is an account of the civil rights movement through the words of those who were there, in images that will variously make the heart soar or sink, and all to the accompaniment of stirring spirituals, freedom songs and voices of optimism and faith.

It is almost imppossible for a young generation to imagine what the United States -- and not just the South but more so there -- was like in 1960: one black woman speaks of the civil ordance of "reckless eyeball" in which a black man could be charged for looking at a white woman in a particular way.

Then of course there were the murders of blacks (ordinary citizen and civil rights activists), the church bombings, the burning of a freedom riders' bus (one survivor says he heard a voice shout "Let's burn those niggers alive" as the bus went up in flames with the activists on board) and segregation of bathrooms, lunch counters, public transport . . .

The South in this period looks like a strange and primitive land, an embarrassment to its people and the Constitution.

This doco doesn't flinch: Martin Luther King appeared just two weeks before Rosa Parks refused to move to the back of the bus but it is noted he was the new guy in town -- so if the bus boycott he called for all went haywire it wouldn't reflect back on the established black leaders in the church.

MLK's cry was simple and eloquent: "It is more honourable to walk with dignity than to ride in humiliation". The people walked.

The bus boycott -- which resulted in the fire-bombing of the King's house and death threats against his wife and child -- was just the start. The freedom riders took the message to rural communities and other cities in the South, the sit-ins tried to force the hand of shop owners to stop segregation in their stores and businesses.

All this came at a price and the footage of the beatings of activists, the images of those murdered, the water cannons and whites saying of murdered activists "they asked for it" is just frightening.

Yet the spirit of those involved was kept strong by solidarity and song.

"The music created a solidarity" says one woman. "The policeman couldn't take away the song", says another.

The music here is stirring, often lyrically simple and therefore memorable, and is inevitably infused with the sound of old spirituals.

Throughout contemporary singers -- Joss Stone, the Roots, Wyclef Jean, the Blind Boys of Alabama and others -- provide their versions of these songs while library footage rolls.

But it is the voices of the people at the time which is the most moving: it is filled with sorrow and anger, hope and pain.

And whether it be Harry Belafonte or an anonymous woman in a church choir, there is a dignity here that is remarkable given the times and circumstancess.

And what it reminds you of also, is just how far this world has come. The civil rights movement sparked anti-aparthed protests and ordinary people began to believe that change was possible -- it was going to come --- if good people banded together to fight oppression and hatred.

The world is (mostly) a better and different place because of these people in the grainy black'n'white footage -- most of them nameless -- and because of the songs they sang to give themselves comfort and strength.

This is a remarkable documentary, essential viewing -- even if America now has a black president. Perhaps even more so because of that . . .