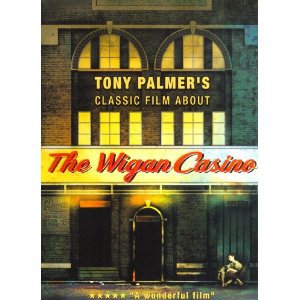 In the advance publicity for his feature film Cemetery Junction (set in the Seventies and written/directed with Stephen Merchant), Ricky Gervais was quick to point out that in the mid Seventies not everyone dressed like glam-rock David Bowie and Marc Bolan, and that for most people in Britain life just went on at the same grim pace: work in the factory, a few pints down the pub, dead end jobs in dead end streets, two-up two-down . . .

Cemetery Junction is a slight if astutely observed film, but you could guess Gervais and Merchant spent some time studying Tony Palmer's doco about The Wigan Casino for source material.

Released in '77, this half hour doco looked at the nightclub which was the home of Northern Soul and a remarkable refuge for those whose lives were otherwise played out in those factory jobs and the non-glam Britain of the day.

The "casino" wasn't a gambling den at all but a nightclub -- unlicensed, remarkably -- and it opened after midnight. Thousands flocked to it to dance to late Sixties/early Seventies soul music until dawn. As some characters say in this programme -- which was part of a series on contemporary England -- that without the release of a night at the casino there would be really nothing to live for.

This was a club that emerged because of demand and at one point it had 120,000 members. People came from all over Britain and Billboard voted it the best disco in the world in 1988, ahead of New York's Stdio 54.

What Palmer -- a reputable doco maker who did the wonderful late Seventies series All You Need is Love about popular music from old jazz through to current rock -- also did was place the casino in the context of the factory life and alarmingly bleak streets of Wigan and used old folk songs as counterpoint. He interviews those of a previous generation who worked in the mines, and the period stills reveal a shocking level of poverty. The final song about what do we do with the ugly ones, the ones who don't fit it, is heartbreaking -- and unfortunately uncredited.

And you can see where Gervais and Merchant looked for their imagery: there are scenes in Cemetery Junction -- industrial workplace and disco dancefloor -- which look lifted directly from Palmer's remarkable The Wigan Casino, now out on DVD.

Graham - 'The Ugly Ones' is by Leon Rosselson, from this album: http://www.informatik.uni-hamburg.de/~zierke/leon.rosselson/records/songsforscepticalcircles.html (Vian cover, too - good taste that man) 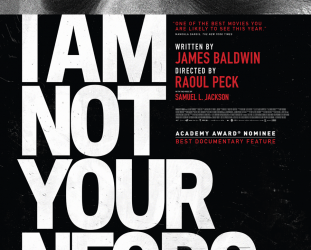 Some years ago in New York I went up to Harlem and by chance there was an exhibition of photos and memorabilia about James Baldwin. It was interesting to note that among the many people... > Read more