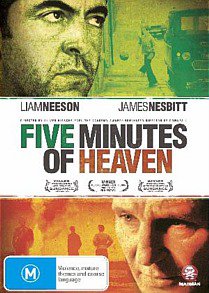 Although this seems to have all the hallmarks of a stage play adapted for the screen, Five Minutes to Heaven (by the director of the gripping Hitler-bunker drama Downfalll) is based on a true story which never exactly happened.

The truth at the core is that a young, angry teenager out to prove himself to the local Ulster Volunteer Force murders, in cold blood, a young Catholic boy during the Troiubles of the mid Seventies.

He is seen carrying out the killing by the victim's younger brother and (as we later learn) is subsequently caught and imprisoned.

That however is just the preamble to the adult encounter -- for a television programme -- of the two men: the young Protestant now grown into a man who makes his living telling his story and attempting reconciliation (Liam Neeson), and the boy Joe (James Nesbitt) still embittered and a victim of the crime.

Neeson as Alistair Little is persuasive as a man still living with his past and trying in his own way to make amends, but the film belongs to the emotionally volatile and unpredicatable Joe who has been brutalised and blamed by his family for doing nothing to save his older brother. He is emotionally crippled by self-loathing and rage behind the black humour he exhibits.

Much of the story is true -- the tragic events of the Seventies, the subsequent lives of the characters -- but in reality they never met as this film plays out.

The story arc appears to move to a climax but more than once sidesteps and the result is a drama which pulls rather too many punches. It is left to the direct-to-camera device of Little being the filmmaker's mouthpiece in identifying the need to stop the indoctrination of angry and rootlesss young men (be they Irish or Muslim) with poisonous ideolgies.

So while worthy, at times compelling and even powerful in places, the staged encounter and the blunt-edge message undermine what might have been an even more commanding and important film. 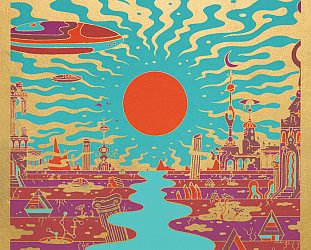 Quick question: How many young male singers who don't have a strong or distinctive voice use a light falsetto as their default setting then multi-track and/or wrap their vocals in clouds of... > Read more