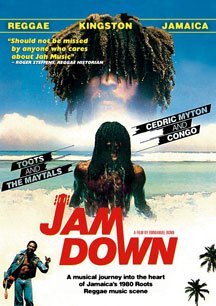 This unfocused and largely haphazard film -- part travel footage, part film of reggae artists, some political subtext hinted at -- dates from 1980 when French filmmaker Bonn took a camera to Jamaica and the streets of black Britain.

There is considerable footage where the camera is looking out the window of a vehicle which travels though the Third World streets of somewhere in Jamaica (presumably Kingston) -- but the real jewels here are Toots and the Maytals captured in a recording studio where Toots is incendiary, and later the magnificent Congos singing Row Fisherman Row on a beach accompanied only by an acoustic guitar.

These extended sequences (there is also solo Toots singing deeply soulful blues, interview with Cedric Myton of the Congos and more footage of them singing material from their classic Heart of the Congos album) are the ones to fast-forward to, they are utterly gripping.

The interviews on the streets of black Britain seem designed to confirm that the second generation over from Jamaica were having it tough, which was hardly news even then. Linton Kwesi Johnson, Steel Pulse and others had been saying so.

The film quality isn't the best and filming people with black skin in dark rooms is never the smartest idea, but the soundtrack and the often impenetrable talk of Jah keeps the attention.

So this is uneven and certainly not the lost classic that some may have it. But it does have important period footage of Jamaica -- and those thrilling sequences with Toots and the Congos. For those reasons alone it should be in any serious reggae collection.