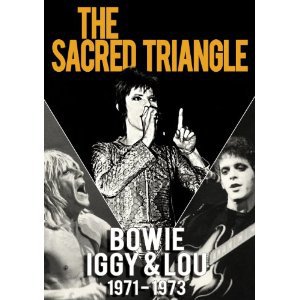 It's hard to believe but in the same year as the Velvet Underground's debut album came out, David Bowie's new single was The Laughing Gnome, a gimmick song and another desperate step in trying to crack the charts.

As this interesting doco makes clear, for many years Bowie was trying all kinds of tricks and tropes (from new clothes to new styles of songs) in increasing desperation. It was the luck of timing -- the moon shot and Space Oddity in '69 -- which finally gave him a real chance, but even then nothing was assured.

By 1971 Bowie was the one-hit wonder, Iggy Pop was almost damaged beyond repair through drugs, maniacal stage performances and self-abuse, and Lou Reed out of the Velvets was just exhausted.

Bowie had been a huge Velvets fan (he'd been given an advance tape of their debut on a trip to New York to pal around with Warhol and Lou) and had taken to doing Waiting for the Man in concerts -- which must have surprised anyone who went for The Laughing Gnome. He also recorded Little Toy Sldier (heard here and with a very bizarre clip) which was, as one talking head says, one part Bonzo Dog Doo Dah Band and the other Venus in Fur (literally Venus in Furs, he just apropriates the words and music).

Out of these raw and unpromising figures an alliance was born -- more unholy than sacred you might argue -- and within two years all of them had resurrected their careers, Reed and Pop mostly thanks to Bowie's intervention and production of their albums, Reed with Transformer which sprung Walk on the Wild Side and Pop with Raw Power.

With input here from Warhol assistant Billy Name, Reed/Warhol and Keith Richards biographer Viktor Bockris, Angie Bowie (who barks her way into the story) and others, we see how this scene between the three was played out and throughout the 100+ minutes music and clips are threaded by way of exaple.

This is a microscope on a period when drugs, sexuality, image and music were being explored with little regard to consequence, and that all these characters survived and are with us today is nothing short of remarkable.

Very interesting insight into these creative but very different personalities, all of whom were shrewd and, to a greater or lesser extent, used each other for their own ends.