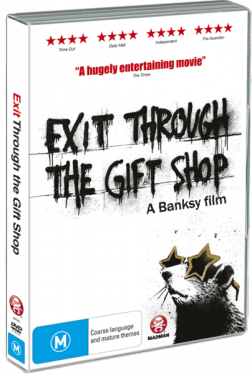 In these days where you sometimes feel there are more mockumentaries than documentaries, and this having as a central figure a man who maintains a scrupulously guarded anonymity, you can feel just a little sucked in. But "sucked in" in a throughly enjoyable and rewarding way.

Right from the start we are told by the mysterious and darkened figure of artist Banksy (I guess it's him, who would know?) that this film isn't about him but about someone much more interesting.

In fact it is about both Banksy (and many other graffiti artists) and the crazy figure of the LA-based French expat Thierry Guetta who seems to have a bottomless income (he buys old clothes, says they are designer stuff and sells them at hugely inflated prices, a metaphor for what is to come?). More than that though his is -- apparently -- a man who has had a camera attached to himself ever since . . .

He films everything without discrimination, but then falls slowly into filming graffiti and street artists, then helping them out, then he meets Banksy who is encouraging because he thinks Guetta is making a film of this new form (stencil art) which is genuine street art.

But Guetta is just filming and filming . . . and here is where this doco takes a slightly mad turn. To reveal the rest would just spoil it, but this becomes much more than a film about street art.

It questions the nature of fame in the art world, how the public can be seduced into believing someone is The Next Big Thing by publicity which ignores the inherent emptiness of the artist, and how an art form can be hijacked.

It is also very, very funny and if parts might not be quite as they seem then other sections deliver much more than you might expect.

A film of terrific twists and unexpected turns -- and you will doubtless also come away with great respect for street artists, but aware that this is also a world where the charlatan can, just by being there, acheive a measure of great -- if perhaps fleeting -- fame . . . and swags of money.

The best such film since Style Wars, no question. And perhaps bound to have the same inspirational effct on a new generation.

And the extra features are well worth a look too.

I loved this portrait of a crazy obsessional - he may have a bad side [like cause immense frustration to other more organised dudes], but he is completely devoted to what he does and goes all out to take his ideas to fruition.
I also loved the way the doco gradually revealed this and let us come to our own conclusions. 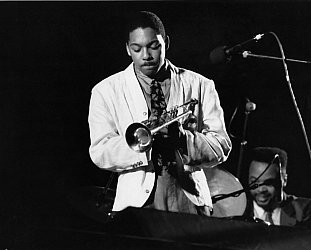