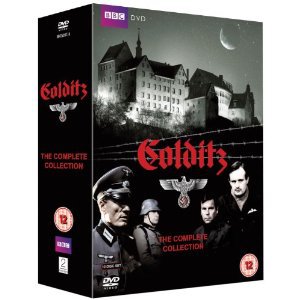 For many decades, those who remember this exceptional BBC series from the early Seventies have searched for it on video and latterly DVD. Over the decades the cachet of the 28 gripping episodes which screened over two years until '74 just grew and grew.

On DVD release at the tail end of 2010 there was bound to be some disappointment after such high expectation.

However the series stands up today as an emotional thriller where there is barely a word wasted.

The story is set in the famous and allegedly escape-proof Colditz castle where the Nazis incarcerated their most difficult prisoners-of-war (British, a few Americans, French and Poles as well as the "prominente", those of high rank or from prominent famous familes who would be bargaining chips).

It is based on the book by Major P.R. Reid who was a prisoner and Escape Officer in Colditz (there's a brief interview with him on the final disc) although a number of characters are compostites.

The premise is simple: men who have nothing else to do but plot escapes (those who didn't just decide to sit out the war) and their captors whose role is thwart and prevent every attempt.

However the series was less about heroics but rather a study in character and the relationships between the prisoners and their captors.

There are some fine character studies here -- notably Bernard Hepton as the Kommandant who is a career soldier, honourable and negotiating a path between keeping the prisoners in and the SS out. Escapes would give the merciless SS an excuse to take over the running of the prison.

His British counterpart is Colonel Preston (Jack Hedley) who is equally scrupulous about the Geneva Convention and shows a keen understanding of the political dynamic the Kommandant faces as well as the social dynamic of men who, after one escape attempt after another is frustrated, become despondent and frustrated.

Around these characters are equally interesting figures: the tight-lipped former insurance assesor Hauptmann Ullman (South African actor Hans Meyer) who is the Security Officer; Major Mohl (Anthony Valentine as the loyal and brutal Nazi hero wounded and sent to serve out the war at Colditz); Simon Carter (David McCallum) who is the British Escape Officer; the American pilot/journalist Phil Carrington (Robert Wagner) . . .

The first three episodes show the capture and early escape attempts of three British officers which land them in Colditz -- and from episode four the tension rises through mistrust of prisoners for each new arrival (anyone could be a German plant), the escape attempts, the delicate social and political negotiations . . .

Colditz of course looks a little dated and perhaps even cheaply made by current standards -- but what makes it so compelling is the absence of those aspects which contemporary filmmakers often think are the necessary dramatic tools of their craft. Aside from the opening sequence there is no music in the series, just the sounds and silences of the castle, and there are no heroic action scenes. Fights are rare and people get hurt, as in real life, after one or two punches.

Silence and facial expression tell as much of the story and the inner emotions as does the finely drawn dialogue.

Colditz is a chest-tightening, tense drama of personalities and culture, and of notions of honour from a time where the world outside was tearing itself apart with animal ferocity.

It may not be entirely faithful, but there is no denying this series is utterly engrossing viewing.

Suspend a little disbelief and put a few qustions of logic and background information aside and you'll find you can't turn away as the stories thread deftly one into another. The final episodes -- where the direction of the war changes and the internal order of the castle is inverted -- are thrilling.

The kind of box set (10 discs) which has you finishing an episode and saying "One more?"

Like the sound of this? Then have a look at this.