The animated, futuristic allegory Wizards by Ralph Bakshi stands as a highpoint of his fantasy work -- and at the time was a marked departure from the tough-edged, sometimes profane "street" stories he told in Fritz the Cat, Heavy Traffic and Coonskin (1972-75), which had more in common with the US underground comics movement of the late Sixties.

Bakshi -- who offers an amusing and digressive interview in one of the extra features on this brightly restored and Dolby-enhanced edition -- had served his time as an animator at Terrytoons doing what he calls the "straight" stuff, but was increasingly drawn to telling more true and contemporary stories when he set out on his own.

But, as he acknowldges, all animators want to try their hand at fantasy and that was where he had started as a kid anyway.

Wizards -- which employed the innovative use of rotoscoping (tracing over film footage and recolouring, adding elements etc) -- was his debut fantasy feature and by far his best for its economy and on-screen impact.

Set in a far distant post-apocalyptic future, Wizards employs the classic opposites: twins who are good (the crusty, slightly lascivious and funny Avatar) and evil (the skeletal glowering Blackwolf), and the diamatrically opposed worlds of magic (Avatar and the peceful kingdom of Montagar which populated by fairies and the like) and technology (the blasted land of Scortch where goblins and mutants live).

On the death of their mother, Avatar and Blackwolf engage in a mighty battle and Blackwolf retreats to Scortch vowing to return. He gathers mutants for his armies but they tend to lose concentration in battle and so are defeated constantly by the elf and fairy armies.

Then Blackwolf discovers an important tool and dispatches assassins to kill off the president and nobles of Montagar in advance of an invasion.

All this background is told by (mostly) stills in just the first few minutes (by a narrator who sounds rather staoned).

Then the real story begins: the tool Blackwolf has discovered is propaganda, specificly Nazi war footage of rallies and Hitler's rabble-rousing speeches which inspire the mutants and strike fear into the inhabitants of Montagar.

This is where the film has its most impact: newsreel footage and Nazi imagery woven into the narrative, and the rotoscoping of marching armies and battles (drawn from classic films such as Zulu and Battle of the Bulge) which are coloured and embellished. What were once Crusaders in some film from the Thirties are now given bat's wings and menacing features. Nazi soldiers in silhouette have horned helmets.

Because of its heroic, allegorical and historical elements, Wizards is a film which grips teenagers ready to move beyond the animation they have already seen -- and for adults there are historical resonances and images which are equally interesting.

In some ways Wizards was a dry run for what Bakshi hoped would be his major work, the two-part Lord of the Rings (Montagard has some aspects of the shire and of course there is magic and wonder at work, as well as a kind of quest). 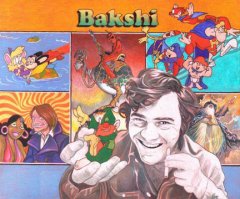 But his Lord of the Rings -- which he wanted to shoot as all live action then animate by rotoscoping -- fell after just the first part. It was poorly marketed and people were left hanging. It also wasn't half as concise and pointed as Wizards.

Bakshi never returned to Lord of the Rings but did make lesser fantasy animation such as Fire an Ice in '83 which many found cliched and disappointing.

Wizards remains a complete, tight and satisfying entity -- and one with a powerful punch which doesn't shy away from using dark history as a warning.