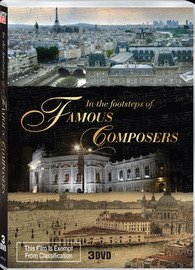 Myth making and hype attached itself to Beethoven at an early age. When he was eight his father -- a boozer -- presented him at a recital as being just six in order to pass him off as a child prodigy like Mozart.

Not that Ludwig needed much help in the prodigy stakes.

And although he was a genius, it wasn't without a struggle and constant revision of his scores, as the profile of him here (one of 10 across three DVDs) confirms when we are taken to see rare manuscripts which show his numerous corrections . . . and a brusque, personally abusive note scribbled across a paper and directed at a copyist whom he seemed to consider a lower form of life and a "bastard".

But no one asks musicians to be nice people, just to create great music.

And these profiles here -- Tchiakovsky, Verdi, Berlioz, Vivaldi, Bizet, Puccini, Mahler, Offenbach and the broody Beethoven -- show that genius sometimes came at a price, and not just to the composers but those often unfortunate enough to cross their path or share their life. 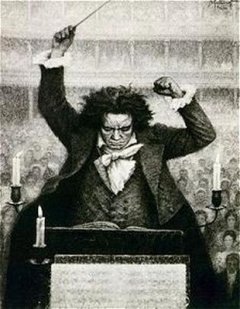 Through often rapidly paced chronology we are given the sketched-in biographies and with a variety of guides -- musicians, conservators in museums, academics, reasearchers and conductors -- we are taking "in the foosteps" of the individuals from Paris and Venice, Warsaw and Vienna, St Petersburg and . . .

We get to see where they were born, composed and had their works first performed, and the streets they walked, parks they ambled through and mountains they heroically strode.

We are taken to Warsaw where Chopin improvised at age 7 and there are grainy images of Poland during the war when his music was banned by the Nazis. And we see and hear folk musicians today playing in small villages, the descendants of those anonymous musicians whose sound so inspired him.

We hear of the madness and suicidal tendencies which some of these characters endured, also (although rather more briefly) of their loves and passions.

But squarely throughout we also have their music played and we see it perfomed.

Less satisfying is the commentary (which plays loose with hyperbole sometimes) where occasionally one voice speaks all the parts.

"Please" (Gestures to a piano stool)

"You are welcome." (Smiles)

"Yawn" (That's you, if you aren't laughing aloud)

At other times we might guess something has been lost in the translations between the many languages in this French series and there are chunks where the monologue sounds like it has been beamed in from a bad kung-fu movie.

But ride those thing out (and they are often so funny as to be entertaining of themselves) and allow yourself to be walked through various parts of Europe with intellgent guides, taken into places mostly off-limits for the casual tourist -- and you get to hear snatches of great music written by some of the biggest and best.

Those who know their classical composers might only find this of marginal interest on a musical level (as a travelogue it will still be interesting) and maybe this is best directed to those family members just getting to grips with classical music and are curious about all the fuss.

You know the kind of thing: "Beethoven, that deaf composers? Jeez, how does that work?"