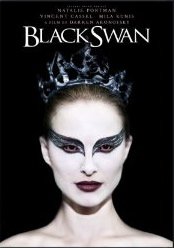 There are few successful films where the protagonist is so unsympathetic and whose character requires a suspension of disbelief, yet whose tension-filled course towards their fate you will watch with increasing concern.

Black Swan -- flawed but beautiful, much like its central character -- is one of them.

Yet right from the opening scenes our prmary dancer Nina (the wafer thin Natalie Portman) seems not for this arduous life. Portman plays her dancer as uncertain, nervous, uncomfortably remote and psychologically fragile to the point you wonder just how this person has survived so long and has got where she is, a contender for the lead role in Swan Lake.

At home however we see some of the reason: her mother (Barbara Hershey as a Joan Crawford-like figure) is emotionally manipulative and controlling, unpredictably volatile (one moment full of concern at others ruthlessly ambitous, then self-centred) and, of course, a coulda-been-a-contender.

Nina is sexually repressed, easily lead, hesitant . . . and yet lands the part?

With the company director Thomas Leroy (Vincent Cassel) alternately encouraging, seducing, goading and abandoning her, and an imagined rival in fellow dancer Lily (Mila Kunis as the drinking and smoking free spirit, or is she?), the pathway to Nina's descent into neuroticism and madness is laid bare.

All of this -- dream sequences blurring with reality -- strains any plausibility, yet the reckless and often beautiful forward momentum hurls you into a storyline which weaves together the magic of ballet (and not so incidentally it's physical torture) and the crazed mirrorworld of Nina.

As beauty alternates with the dark side -- Nina is to play both the white and black swan in Leroy's new production -- you can't help but watch as Nina's life unravels in the most public of ways.

And the final scene, although not so unexpected as it has been signalled early, is still dramatic.

Portman rightly won considerable aclaim for her role (although the cutaways suggest she might have done much less of the dancing than we are lead to believe), but too often melodrama -- as exemplified in the musical score -- takes the place of a more refined kind of tension.

Yet for all its flaws, Black Swan is an engrossing dance of madness, self-absorption, psychological thriller and sometimes eyes-shut grotesque bloodiness.

You wonder what the composer might have made of it.