ELITE SQUAD; THE ENEMY WITHIN by JOSE PADILHA (Madman DVD) 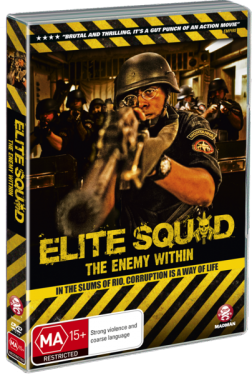 When it comes to a bit of the old glamorous ultra-violence, Hollywood might as well give up trying. The mainstream American audience has little stomach for violence which is so visceral that you don't know whether to look away, scream with horror or burst out laughing.

At a screening recently of The Raid -- a real gut-tightening thriller made in Jakarta by the Welsh director Gareth Evans who seems to have found his niche and a cast of street-hardened extras prepared to go the distance when it comes to blood-letting and taking a stream of body-ripping bullets -- the audience seemed divided between all three responses, and often went for a couple simultaneously.

South Korea also does a nice line in such things -- witness the beautifully filmed, violent and sometimes hilarious Mr Vengeance Trilogy -- and this bruising encounter between gangs and cops out of the slums and streets of Rio is much the same.

Plenty of action, and here a mix of complex politics and trouble on the home front for the commander-in-chief Roberto Nascimento of the special task force who is assigned to cracking the most difficult cases, this one starting with a prison riot which goes wrong. (Which begs the question, I guess, can a prison riot go right?)

When you add a human rights activist/lecturer (who becomes a politician) into the mix things go from bad to even more complicated. And who would have guessed that the local militia are taking a cut from the slum drug dealers so really aren't happy at all when Nascimento starts cracking down on those hard-bitten and well armed thugs?

A sequel (set 13 years later, in Portuguese with subtitles) to the equally bruising but also socially insightful Elite Squad of 2007 -- both of which have cracked box office records in Brazil -- this trawl through corruption, slums, gun culture and dodgy politics takes you on a thrilling ride.

And at times when the ultra-violence kicks in you don't know whether to gasp, laugh aloud or avert your eyes.

If you choose the latter you can also count on this.

You will turn and look again, because this is one of those films where you really can't look away.

Like the sound of this? Then check out this for light relief after. 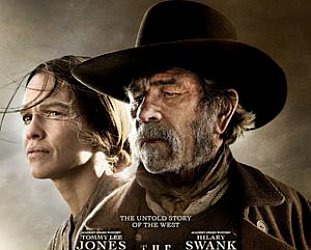 Women are rarely central figures in Westerns and are most often either inconsequential or barely visible. In many they actually don't appear at all. Which makes this grim, frequently... > Read more