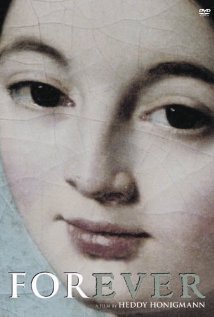 Because I was a bit of a fan -- but only a very small bit I have to admit -- when I went to Pere Lachaise in Paris, the famous cemetery, I visited the grave of Jim Morrison.

It was a desultory experience but taught me a valuable lesson: never judge a music (or musicians) by the fans.

Around his grave were a litter of young people, most in some strange state of deep melancoly that could only be shared silently with their fellows and which said, in a glance, "you can never feel as deeply as I".

I did actually. I felt a keen sense of something like loathing for these people -- the boys all JIm clones in leather pants -- who drank wine and threw their bottles carelessly onto the graves nearby, who defaced the beautiful cemetery with sings which read "Jim" and and arrow pointing to his final resting place, and for whom Jim -- a smelly drunk by contemporary accounts, and only a poet in his own imaginings -- had been elevated to sainthood.

I left and ambled around the old graves in this huge city of the dead and was smitten by the glorious and often water damaged sculpture, tombs and broken mausoleums . . .

Pere Lachaise was, even on that cold day, a magical and slightly mysterious place.

It is to the credit of the makers of the sensitively filmed doco Forever (which screens on the Sky Arts Chennel, Thursday March 21, 8.30pm) that "Jim" just gets a few visual references (those scratched sings) and the focus is elsewhere.

This beautifully shot 90 minute feature uses both the graves of some of the famous people buried there (Chopin, Oscar Wilde, Proust, Apollinaire, Ingres, Modigliani, Maria Callas ) and their visitors as gentle starting points for a discussion into art and how it impacts on people's lives. In this case long after the artists have gone.

There are enormously moving stories sketched in here; the young Japanese pianist studying in Paris who aches with the loss of her father when she plays the music of Chopin; the Iranian taxi driver who says he lives for song and at the grave of the writer Sadegh Hedayat (1903-51) is persuaded to sing a Persian song from a book of poems he carries constantly; the middle-aged Armenian woman who has come to clean her boot-maker father's grave every week for 10 years because otherwise "it wouldn't feel right" and she talks to him of her life, politics, music . . . There are women here who, unpaid and unrequestd, spend their days cleaning graves and watering flowers. And movingly a young man who speaks eloquently of Modigliani and beauty. He is an embalmer and we see him at work on the face of young woman, and it feels sensitive and delicate.

Here too is footage of the great Callas singing, and of an anonymous woman singing at the grave of a family member. And of the late jazz pianist Michel Petrucciani. We are also introduced the tomb of Danielle Messia who only made two albums and died in '85 age 27. In all the years since only one person other than the cemetery guide has ever been to her a grave, a woman who traveled nearly 300 miles to be there on Messia's birthday.

There are poignant images here too: a woman who cleans off a grave, sits in her folding chair and reads from a book to whomever is entombed there; poems on stone fading for all eternity; the old women who come here almost every day, one of whom tells a horrifying story of life under Franco in Spain from where she fled some 60 years previous . . . 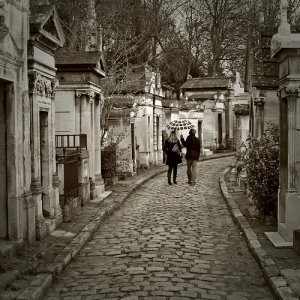 There is a message left on Wilde's tomb which reads in part "you are proof that wit is mightier than any weapon"; the young Korean man who has read Proust and has made this pilgrimage to his grave just to . . .

The film follows some of these people into their lives: two young blind men watching a film with Simone Signoret; a woman to the Louvre wher she speaks of what Ingres' paintings mean to her . . .

And an artist who initially hated Proust but found every facet of life within his pages and so drew a comic of Rememberance of Things Past expecting to sell 500 copies in a year (and sold 5000 in the first month) . . .

If we might invert the old saying, this beautiful and leisurely doco shows that even in the midst of death, there is life.

And in life, there is art.