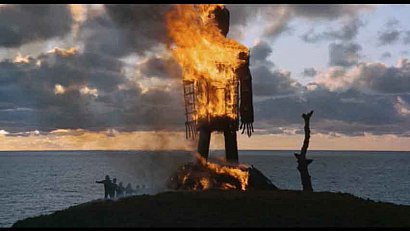 Paganism survived in Britain long after the arrival of Christianity. In the middle of last century when cleaners got to top of Exeter Cathedral -- which was completed in the 15th century -- they found some unusal carvings in the roof bosses which hols beams together.

They were of a man with leaves for a beard and hair.

This was the pagan figure of Jack O'Green, sometimes known as the Green Man (hence all those pubs of that name) who, in another incarnation was the Green Knight the brave Sir Gawain (one of Arthur's knights) fought.

He also appears in Canterbury, Wells and Winchester catherdals among others.

The builders of these Christian monuments usually hid their pagan figure away from the eyes of the faithful.

There perhaps isn't so much paganism these days (although traditional morris and maypole dancing and "Druids" gathering at Stonehenge still occur) but there is a dark fantasy that in remote areas the rituals may well still exist.

That was the premise of  David Pinner's 1967 novel Ritual was which adapted by screenwriter Anthony Shaffer into director Robin Hardy's horror-thriller The Wicker Man, released in Britain 40 years ago.

The story is simple on the surface: a Christian policeman Neil Howie (Edward Woodward) goes to the remote Summerisle in the Hebrides to investigate the disappearance of a young girl and becomes convinced she has been abducted for a pagan ritual killing. 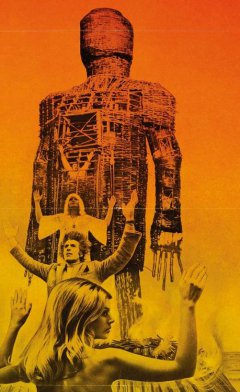 While the locals deny the girl ever existed and Howie encounters the charismatic laird of the isle (Christpher Lee), the story takes a darker and darker turn.

To say more would be to spoil what is widely regarded as one of the great British cult movies, but the image of the burning statue made of wicker will doubtless haunt you long after the film has ended.

There was a remake with Nicholas Cage (critically panned), a stage production and an Iron Maiden album of the same name.

But it is the original film -- restored for the 40th anniversary and with extra scenes from the original cut -- which you need to see.

And the soundtrack by Paul Giovanni, a composer and songwriter, has at last been restored and is available on CD (Silva Screen, through Southbound in New Zealand).

The soundtrack album never came out at the time as intended but now appears in its entirety with three songs recorded but not used, and a five-track suite of the opening theme and some incidental music (plus soundbites of dialogue) 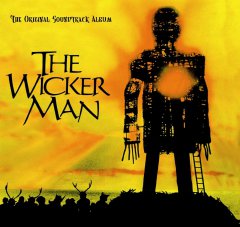 As Rob Young notes in his excellent book Electric Eden; Unearthing Britain's Visionary Music, "music, in a style very much in keeping with the prevailing early-70s climate of rural acoustic folk, takes a crucial role in the [film], although curiously they hired an American theatre director and playwright Paul Giovanni to construct the soundtrack".

"Giovanni composed all the songs and sang many of them himself, in a breathy seductive Scottish burr . . ."

Giovanni and the musicians who played on the soundtrack (some of them recent graduates from the Royal College of Music) appeared in the film, at one point as the group in the pub which was called . . . the Green Man.

As Young observes, if only the policeman Howie would listen, he could hear clues about the culture of the island in the songs' flagrant eroticism and nature worship.

Ballads of death and allusions to fornication as well as ritual dances are the cornerstones of the film and soundtrack.

As with Rosemary's Baby, some would later say the film's controversial content made it somewhat cursed. They cite the protracted problems getting it edited and screened (it was chopped severely from the original 102 minute running time and the edited version screen for just a week in London), and it was believed the master tapes for the soundtrack had been lost. Both the original print and tapes were believed to have been buried in a motorway.

None of that turns out to be true, but as they say, "print the legend".

The sad fact however is that Giovanni never did another score and died in New York of Aids-related illnesses in the 1990.

But his legacy is the unusual music for a very unusual film.

Film is in my top ten - I watch it 3 or 4 times a year. The original music, with its authentic feel, is a large part of the movie's eerie and foreboding character. Fantastic cast, too. Woodward, Lee, Lindsay Kemp, Pitt, Cilento. Try and avoid Hardy's recent sequel / reimagining, "The Wicker Tree". Terrible movie that taints the original. Wicker Man is a true classic. Try a viewing of this, "Blood on Satan's Claw" and "Witchfinder General".

The most frustrating aspect of this film and its OST is the constant reissue of them both with just a little more material salvaged from various occult hiding places. Which should not detract from the pleasure of consuming both!