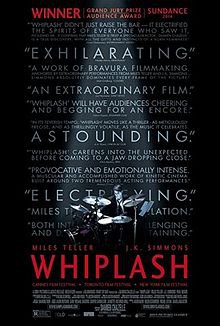 Films about jazz are rare, good ones even more so.

The reasons for this are pretty easy to discern: jazz is a minority art form and therefore of not much interest to the general audience, most of whom have very different views on what “jazz” actually means.

That's because the word has become so widely used, misused, re-defined and co-opted for other purposes (the cologne by that name?) that it is now ambiguous, unhelpful and possibly even moribund.

But those who do have some better understanding of what jazz – the music – is, are the worst critics of movies about the music they love and respect. 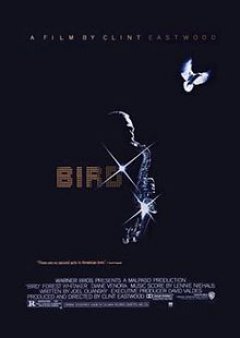 Look at the criticism of Clint Eastwood's film Bird in '88 about Charlie Parker. Jazz knives came out everywhere . . . but of course in many ways Eastwood wasn't making a movie about Parker for jazz folks.

(If he'd wanted to do that he would have done a doco.)

He was trying to make a human story about a flawed genius for that general audience, so – as with all such films – liberties are taking, nuances evened out and time and circumstances were telescoped.

The consensus on Bird I found was that jazz people were dismissive if not downright sniffy, and people I'd consider in that general audience though it pretty good.

A better jazz film around the same period was Round Midnight (with Dexter Gordon) and jazz people on the whole really liked it. My “general audience” friends didn't bother going to see it. 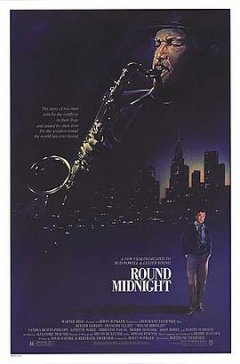 So when a “jazz film” is about to be made, the first things the writer, director and others much be thinking is, “Who is this being made for?”

Both parties – jazz people and the lay audience – should however find something in writer/director Damien Chazelle's much acclaimed film Whiplash which opened this year's Sundance Film Festival and has been winning awards ever since.

In some ways it isn't a “jazz film” but a beautifully shot and superbly edited account of ambition, passion, and a brutal psychological battle between a promising young jazz drummer and an almost psychopathically cruel tutor in a New York conservatory.

It is edge-of-seat stuff as the young man's career gets a brief upward trajectory, is thwarted repeatedly and delivered an unexpected blow (very unexpected, very visceral) and . . .

Playing young drummer Andrew Neyman is 27-year old Miles Teller, an actor whose career has thus far been so far down the totem pole for most as to be a new face. In real life he has been a drummer (and saxophonist) so has the chops to do some of the actual playing (although you suspect there have been stand-ins for some of the more frenetic sequences).

His teacher-cum-nemesis Terence Fletcher is played with brilliant brutality and emotionally bullying by J.K. Simmons (Law and Order and the astonishing prison series Oz in the late Nineties in which he played a psychopathic white supremnacist inmate with chilling intensity).

Fletcher's position as an ambitious band leader allows him to psychologically browbeat and abuse his students into being better, but the cost is evident. He can however be charming and supportive but then – on the downbeat – turn seriously nasty and vindictive.

Both of these actors bring compelling performances. 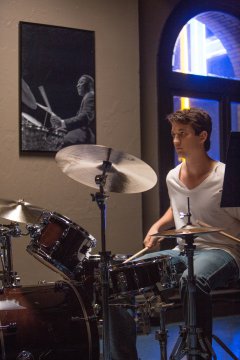 Whiplash is a jazz film in many ways, but it is also more than that: it is film about the drive it takes to be the best and the price the gifted can and must be prepared to pay. It also neatly undermines the old notion of the natural genius of jazz musicians and puts in its place the work that needs be to done to improve and achieve.

There are also some lovely and understated human moments – the dinner table scene with family where the jock's ambition is seen as more comprehensible and worthy than the drummer's, a break-up with a girlfriend – but most of all it puts music and its makers right at the centre of the frame.

Writer/director Chazelle has based his story on his own experiences as an aspiring drummer so he knows his subject, which means Whiplash is a jazz film that jazz people can say, “Yeah!” about, and the general audience can read in a completely different way.

No matter how you take it, it's a rare film . . . rare in that you not only listen to drum solos, you actually will the drummer on.

Whiplash opens in selected cinemas in New Zealand on October 23 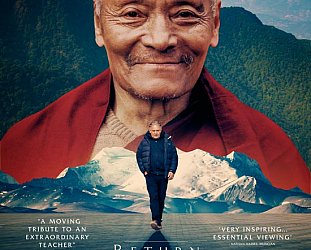