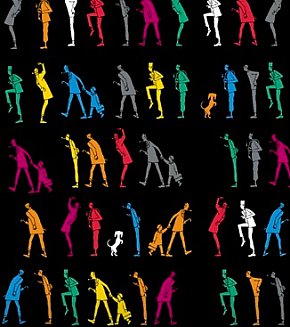 In the Sixties and Seventies it was easy and fun to ridicule French culture: they made lousy pop'n'rock, their art films were so earnest they were readily parodied . . . and they hailed Jerry Lewis as an auteur at a time when he had fallen from grace in America.

But every now and again stuff slipped through the skepticism, one of them being the films of Jacques Tati whose Monsieur Hulot character – blandly bourgeois in his hat and overcoat, carrying an umbrella – was a charming figure central to a number of enjoyably odd movies.

In Tati's films M. Hulot moves through scenes where the backdrop – be it in a bright and soulless space as the airport and offices in PlayTime, or the dirty garage in Traffic – there is chaos or quirky behaviour all around him.

People move like automatons or clowns depending on the circumstances, sometimes all of these behaviours in the same space. 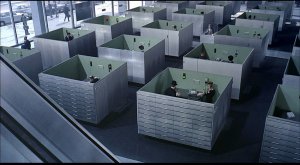 Tati films could make for amusingly confusing viewing, especially as sometimes characters spoke in English and amidst the cooly delivered irony was a sense of the absurd.

His masterpiece is arguably PlayTime (1967) in its presentation of a clinical world where humans just don't conform to the types of creature which should be occupying these wonderfully Modernist spaces. 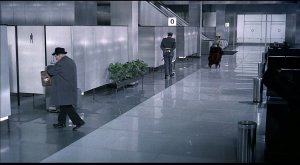 Remarkably Tati had some of these enormous sets built specifically for the film, but the real world with its high-rises of glass and steel, cavernous internal spaces through which tiny humans move in crazy patterns, and the overwhelming technology are equally as effective in creating a sense of anti-social space.

Interiors are functionally modern but also devoid of character, distances within office spaces are so vast that someone approaching down a neon-lit corridor takes as much time to arrive as Omar Sharif in Lawrence of Arabia. Shoes clack down hallways, floors are slippery, leather chairs squeak and wheeze, it is hard to distinguish between real and created spaces . . .

As with many of Tati's films, the ambient sound of our world in magnified for effect.

M.Hulot is not a central character in PlayTime (Tati had grown weary of the character and even introduces doppelgangers) and it is a world populated by people in uniforms (men in similar suits, security guards, air hostesses, waiters) and the architecture is the real character. And it is a character without character. 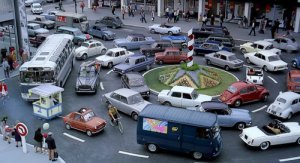 Trafic (1971) is far more chaotic as M. Hulot and a small band of incompetents try to drive to an automobile fair in Amsterdam from Paris to deliver their new product.

Trafic takes delight in juxtapositions (modern cars driving past wrecking yards of car carcasses) and as much as there is a visual comment on the chaos of traffic there is an almost Kraftwerk-like delight in the orderliness of motorways.

The car as a symbol of isolation is hinted at, along with a love of the beauty of the beasts.

Throughout we see sequences which are akin to a Buster Keaton silent comedy (Hulot on the motorway barely avoiding being hit, trying to climb up a trellis outside a house), there is the clownish comedy of listless workers in the factory, some prank-playing hippies . . . and everywhere cars, trucks and buses. 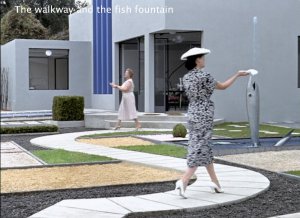 It is replete with quietly delivered ironies – pedestrians walking faster than cars in traffic, vast parking lots in which people try to find their identikit car – and although almost glacially slow (and a very long 100 minutes) it demands the viewer slow down also to reflect on the haste of modern life.

Tati's Mon Oncle – his first film in colour, in '58 – anticipated many of his themes, notably the disjunction between post-war American consumerism in France and the rush to modernity in Europe (most often epitomized by cars and architecture).

These three Tati classics are the cornerstones in a superb box set of Tati films (through Madman). 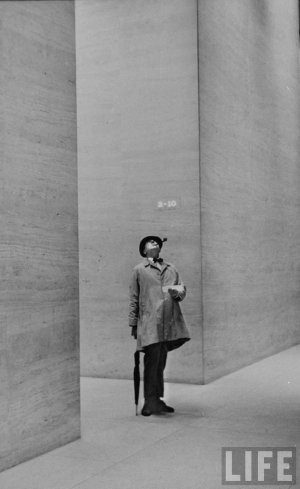 The Jacques Tati Restored Collection includes his significant major features but also his earliest short films from the mid-Thirties onwards and analysis of some in feature docos by Stephane Goudet and an interview with film critic Jonathan Romney on the Trafic disc.

Only Parade here – from '74, a portmanteau of Swedish circus acts in which he plays the compere – feels strained.

In that regard you can feel the spirit of Buster Keaton and Charlie Chaplin somewhere inside them and, yes, in some of the more set-piece vignettes, a little of that great American auteur so respected by the French film crtics, Jerry Lewis.

If you want to see a master film maker and visionary, and are prepared to give him the luxury of time to work his magic, then you could do worse than settle in with films like Mon Oncle, PlayTime and Trafic.

More than once -- in the character of M. Hulot, a man often at odds with a world he cannot understand -- you will see the spirit of Chauncey Gardiner in the droll humour of Jacques Tati. 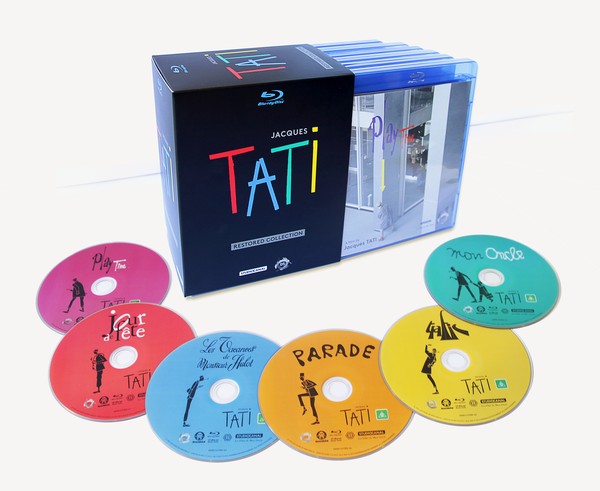