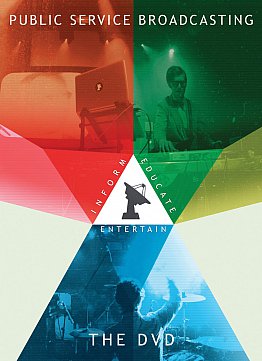 Those many of us who considered Public Service Broadcastings' Inform-Educate-Entertain to be one of the best albums of 2013 definitely need this DVD, because -- as we know -- PSB are as much about the images as the music and samples.

Using old British and US documentary footage, films and public information programmes as source material, PSB constructed songs around samples and brought to life a perhaps less cynical era when progress, speed and science were exciting and, despite sometimes being enmeshed in the Second World War (as in the case of the thrilling track Spitfire), there was an optimism afoot.

As band member J. Willgoose Esq says in the extra features on this collection of clips for the songs on the album, he isn't the frontman for the group, the footage which they screen really does that work.

And it's true: the DVD of clips opens with the title track which acts like an overture in its musical and visual references to what follows, and the old film footage -- the conquest of Everest, the innovation of color television, military machinery, fashion from the Fifties and Sixties etc -- is engaging in its own right.

The cut-up and sample technique is highly sophisticated and the live showing in the additional features illustrates just how well it all comes together on stage.

Willgoose is a very funny and self-effacing fellow in interviews (he jokes about his geography teacher images, "hence the corduroy") but also astute in terms of how best to present this melange of music, live performance and footage.

Elsewhere will have an interview with Willgoose -- who answered our Famous Elsewhere Questionnaire here -- in the new year when he talks about their forthcoming album The Race For Space (released a week or so before their appearances at Taranaki Womad, March 13-15).

Meantime though, here's a look back to that debut album.

And if it went past you then you should definitely check this out.