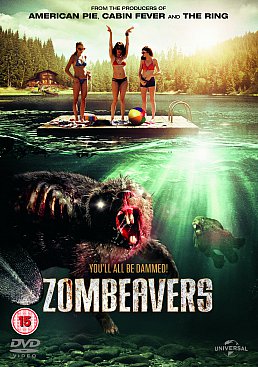 Because some of the most academic and intelligent people I have met in my life are also among the most socially inept, emotionally fragile and stupid, I've never thought being intelligent made you a better human being.

Being well read confers no moral superiority either, otherwise the great writers would all sit on the right hand of God. And we know if you ever wanted to encounter a flawed bunch of people you need only look at the lives of authors.

That is why I spring to the defense of trashy novels (not elevating them above great novels, of course) and have no qualms about watching B-grade movies.

I couldn't imagine a life of just elegant or thought-provoking films, I think you need to embrace escapism every now and again:  I recommend Nude Nuns With Big Guns in this regard.

Until the zombeavers arrive.

The plotline is so thin and familiar it hardly needs to be mentioned: three shapely sorority girls (mostly in cut-off jeans or bikinis) escape for a girls' weekend at a cabin in the woods where there's no cellphone coverage (they think that's a problem? Wait until the zombeavers arrive) and says things like, “Seriously?” and "biatches".

Their boyfriends unexpectedly arrive (cue sex), they swim in the nearby lake and get a bit spooked by strange sounds and . . .

The zombeavers – ordinary beavers spiked up on toxic waste – start to lay into them, people get bitten and turn into human-sized beaver-like zombies and . . .

Of course the first third is peppered with beaver jokes, the film's tag-line is “You'll all be dammed”, there is a cute (but inevitably temporary) dog and lots of fake blood, screaming and cheaply constructed “beavers” scuttling everywhere.

It is mindless nonsense and I don't expect anyone with a registering IQ would be interested.

I laughed nearly all the way through as yet another cliched character appeared or plot twist was revealed.

Gotta warn you though, that even the bloopers at the end aren't quite as funny as all that has preceded them.

I doubt I'll ever see another film starring Rachel Melvin, Cortney Palm, Lexi Atkins and so on.

Director Jordan Rubin (who co-wrote this with Jonathan and Al Kaplan) has something akin to a showreel for other work but that's about it.

Except to say the theme song at the end – a hilariously straight, swinging, lounge bar synopsis of the story – is absolutely terrific. It might be all you need.

Now, where did I put that biography of Proust?

Zombeavers is available on DVD/Blu-Ray.